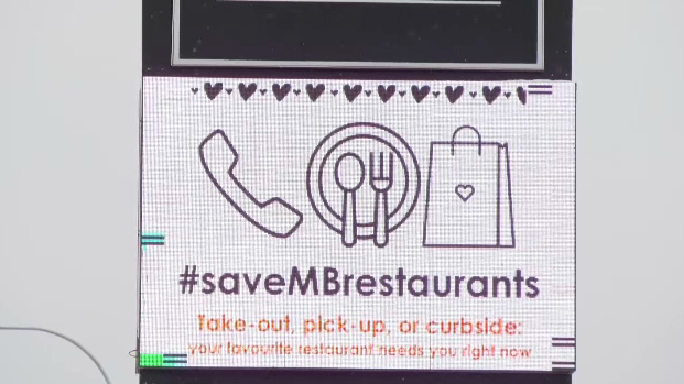 A billboard at Four Crowns Inn can be seen displaying the #saveMBrestaurants hashtag.

WINNIPEG -- Small businesses in Manitoba are the backbone of the economy, and with the province under code red restrictions, businesses say they need local support now more than ever.

Many restaurants in the province are relying on takeout and delivery to stay afloat.

Shaun Jeffrey, president of the Manitoba Restaurant and Foodservices Association, said the support from Manitobans has been amazing.

"Ever since we had to go down to our second lockdown and regulate it to just takeout and delivery, we've had a lot of outreach from Manitobans just looking to support local restaurants."

Jeffrey said he was looking for ways to drum up support for the industry back in October and came up with the hashtag #saveMBrestaurants.

"Our first run at the hashtag on Facebook, we had over 15,000 views of the actual hashtag," said Jeffrey.

The hashtag caught the attention of Susie Erjavec Parker, a social media strategist in Winnipeg.

She worked as a waitress for years and said she wanted to do something that would help put money in restaurant owners' pockets.

"I saw it happening online, and I thought this really needs kind of a boost, an amplification, and I'm going to take my experience in restaurants and food marketing and give it a bit of a kick in the pants."

Parker said the hashtag caught on quickly, and shortly after, people in the industry were reaching out to see if they could put the hashtag up on their digital billboard.

She said the hashtag gained attention from other provinces in Canada as well, and she's working with Alberta and Ontario to create a hashtag campaign for them.

"If you have the means, support local. Do your purchasing sooner than later so you can spread out the demand and the work on those that are delivering," said Bowman.

On Friday, the province announced their new hashtag, #ShopLocalMB encouraging Manitobans to buy local during the pandemic.

Other hashtags like #SupportLocal and #SupportWinnipeggers have begun to trend as well.

Jeffrey said support from Manitobans is crucial to the survival of the restaurant industry.