WINNIPEG -- At first glance, Manitoba’s vaccine rollout seems to be at a rate comparable to the province’s closest western neighbour, Saskatchewan.

Both provinces, of similar geographic and population size, have administered upwards of 200,000 vaccine doses.

A closer look at each province’s daily vaccination rates, however, shows a different story.

Over the past seven days, on average, Saskatchewan has been able to administer over 7,000 first vaccine doses every day. The province was even able to reach over 10,000 first doses administered in a single day.

Manitoba, meanwhile, is averaging a far slower rate, at just under 3,000 first doses per day in the same period. Current data shows there were days where below 1,000 first doses were administered in Manitoba. 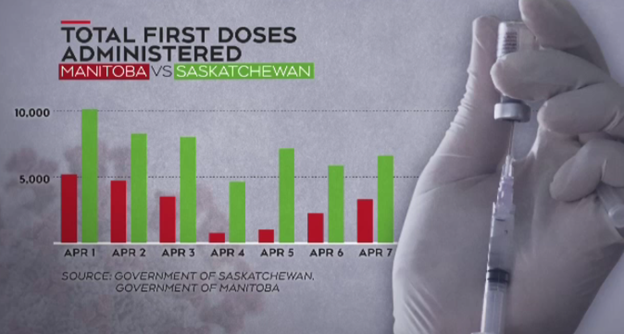 “I think what this clearly says is that we’re lagging behind and we’re not doing as well as we could be doing,” said University of Manitoba virologist Peter Pelka.

The province says the discrepancy is largely due to different counting methods between provinces.

“In Manitoba, our vaccination counts are determined by actual needles in arms," a provincial spokesperson said in a statement to CTV News.

"Some other provinces’ vaccination counts are based on vaccinations and booked appointments; the latter which may or may not happen."

“I can understand how it may make our numbers look better,” said Pelka, “But I don’t think it fully explains the low vaccination numbers we see overall in Manitoba versus other provinces of similar size, such as Saskatchewan” Pelka points to vaccinations numbers in each province on Monday, April 5, as an example.

“Even if ten to twenty per cent of those reported vaccinations were actually cancelled, Saskatchewan is still thousands of vaccinations ahead of us.”

“We know that we were many, many days behind on data entry of people who had received vaccines,” said Dr. Roussin.

An update to the province’s vaccine dashboard is expected Friday, Roussin said, which will provide more up-to-date numbers that better reflect the vaccination rate.