How Manitobans can view the Strawberry Moon 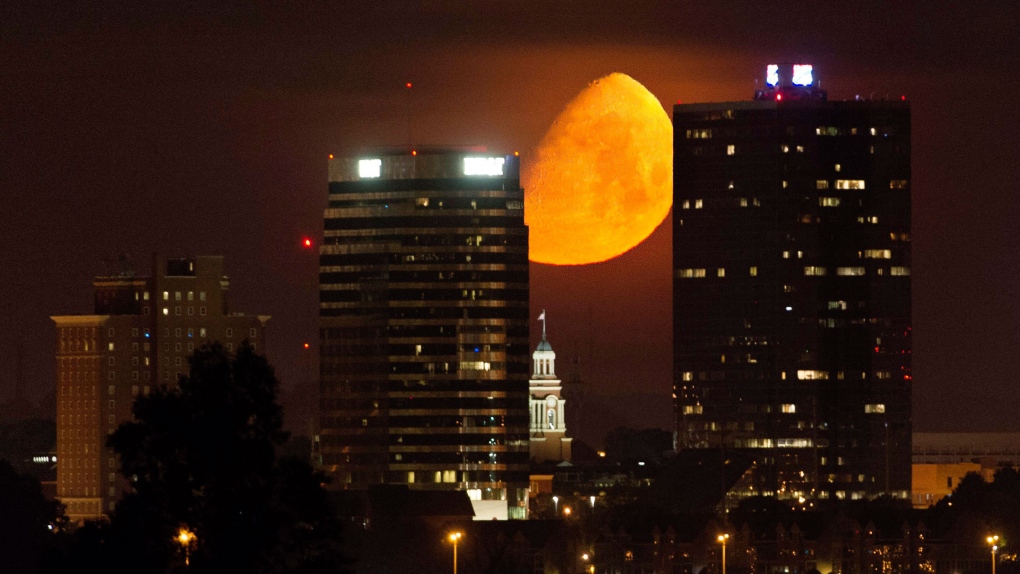 A waxing gibbous moon sets over the downtown skyline of Knoxville, Tenn., early Saturday, June 3, 2017, leading up to the June 9 Strawberry Moon. The Strawberry Moon, also referred to as a minimoon, is this year's smallest full moon orbiting some 250,000 miles away from Earth. (Calvin Mattheis/Knoxville News Sentinel via AP)

WINNIPEG -- A lunar phenomenon, known as the Strawberry Moon, will be lighting up the evening sky on Friday for those in the Western hemisphere.

Scott Young, senior planetarium producer at the Manitoba Museum, explained that every full moon throughout the year has its own name, as people used to use the moon as a calendar.

“So there’s the Harvest Moon in the fall that we’re very familiar with, the one after that is the Hunter’s Moon,” he said.

“The one in June is called the Strawberry Moon, presumably because that’s when the first harvest of strawberries happens for folks that have a little bit of a warmer climate than we do here in Winnipeg.”

Young noted the full moon rises as the sun sets and it will remain visible all night long. Though not a super moon, Young said it will be quite high and bright, but won’t look like a strawberry despite what the name might convey.

“Just don’t expect it to change colours or to look like a strawberry. It’s going to look like the full moon and light up the whole evening sky, it will be great.”

June will also bring about the Summer Solstice, the specific point in time when summer officially begins.

Young noted the seasons are based on how the earth orbits around the sun, the tilt of the Earth’s axis, and geometry, but it doesn’t have much bearing on the weather people are currently experiencing.

“Now, with the weather we’ve had the last couple of days, I think somebody forgot to tell the earth that summer hasn’t started yet, it’s been great,” he said.

“And that’s sort of the lesson: this is a point in space that we can measure very precisely, but it doesn’t necessarily have a lot to do with the weather that we’re feeling. That has a lot more to do with where you are, how much rain there is, climate change, and all those kinds of things.”

Though the Manitoba Museum, Planetarium, and Science Gallery all closed due to the COVID-19 pandemic, they are still offering virtual resources, such as the ‘Manitoba Museum @ Home.’

Young said they have also been running planetarium shows, which people can watch at their own leisure.

- With files from CTV’s Katherine Dow.