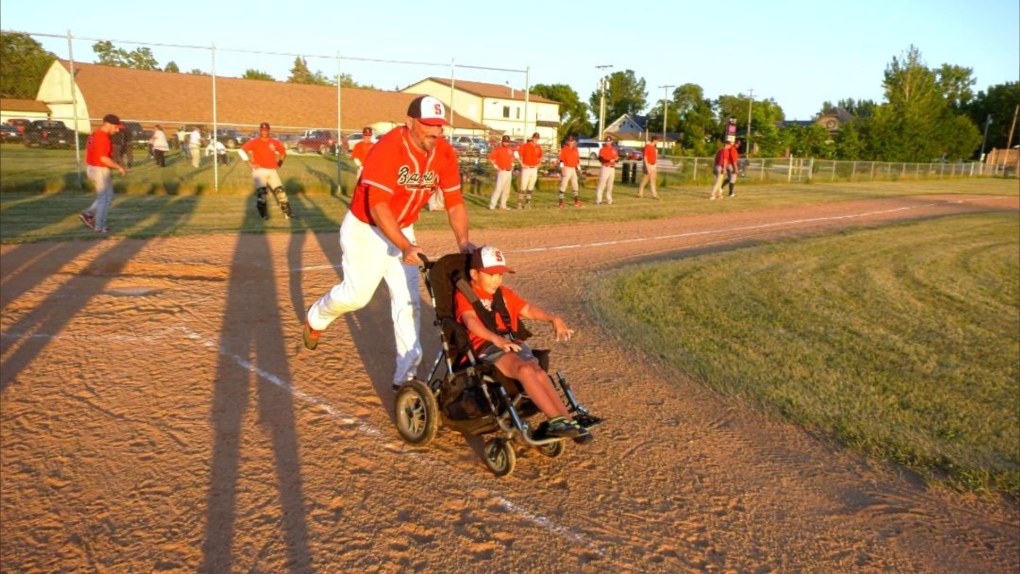 When the game is over, Jacoby picks a Braves player to push him around the bases. (Source: Mike Arsenault/CTV News)

WINNIPEG -- The Springfield Braves love to hit homers and round the bases, and at the end of every game the team lets their biggest fan join in on the action.

After taking a break from the sport he decided to make a return at the age of 42. Now his son and daughter are his biggest fans.

“When I first came back, it started just for myself. Then it kind of grew into not just for me, but for (my son) and my family,” Zebinski said.

He said his son Jacoby loves baseball, and never misses a game.

It’s his love of the sport that gave birth to the team’s post game tradition.

“I think it was something that came from him originally.” Zebinski said.

“He wanted to just round the bases and he wanted to be part of the game.”

When the game is over, Jacoby picks a Braves player to push him around the bases -- a lap that means a lot to him.

Jacoby was born with spastic cerebral palsy, a disorder that affects all four limbs.  He uses a wheelchair and requires a lot of assistance.

His lap around the bases has grown into a league-wide tradition.

“Once the game is over – we can all kind of share this one really cool moment that’s bringing a lot of joy to a very special kid,” said Cole Cassie, a player on the Springfield Braves.

It’s not hard to guess what part of the game is Jacoby’s favorite.

“Running the bases,” Jacoby said with a smile on his face.

“Because everyone gets to cheer.”

His passion for baseball has been recognized throughout the league.

In 2019, Jacoby was awarded the Jason Krestanowich Memorial Trophy by the Winnipeg Senior Baseball League.

The award recognizes a love for the game of baseball, and referred to Jacoby as the heart of the game.

“To see that and to see him being embraced by every team, it’s the best,” Zebinski said.

He said Jacoby is the reason he still plays ball after all these years.

“It’s because of him, because he enjoys it so much it makes it all worthwhile.”