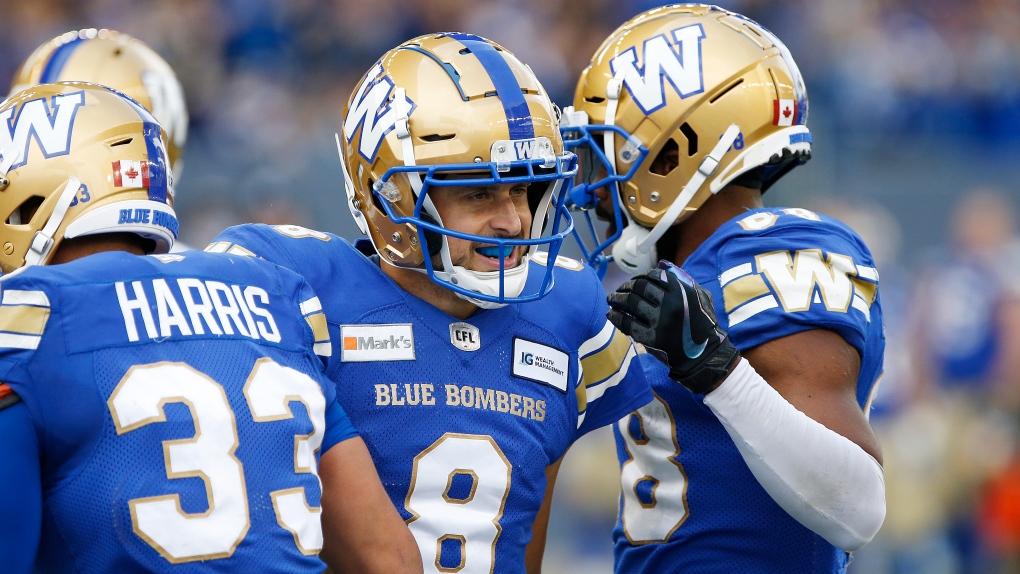 Winnipeg Blue Bombers quarterback Zach Collaros (8) celebrates his touchdown pass to Darvin Adams (1) against the Saskatchewan Roughriders during the second half of CFL action in Winnipeg Saturday, September 11, 2021.THE CANADIAN PRESS/John Woods
WINNIPEG -

Before the 2021 season in the CFL, the last football Canada witnessed was the Winnipeg Blue Bombers winning the Grey Cup in Calgary in 2019.

Then the pandemic hit and the 2020 season was cancelled, but coming into 2021, the Bombers were looking to repeat as cup winners.

Now they are a win away from securing a spot in the 2021 Grey Cup in Hamilton. First, they will have to get through the Saskatchewan Roughriders in the Western Final.

Before the two teams hit the field, we will take a look back at how the Bombers got into this position.

After a long break of over a year and a half, the Bombers returned to action against the Hamilton Ti-Cats in a rematch of the 2019 Grey Cup.

It was a low-scoring affair but the Bombers showed how strong their defence was by limiting Hamilton to only six points and opening the season with a win 19-6.

The following week the Bombers again showed their defensive prowess by beating the Toronto Argonauts 20-7. Quarterback Zach Collaros completed 32 of his 40 passes in the game – two of those throws were for touchdowns – and he just missed the 300-yard mark throwing for 292 yards.

After starting the season 2-0, the Bombers hit the road to again face the double blue in Toronto.

This time the Argos got the better of Winnipeg, limiting Collaros to 18 completed passes, and handing the Bombers their first loss of the season, 30-23.

The Blue and Gold wouldn't stay down for long though as they squeezed out a win over the visiting Calgary Stampeders, 18-16. The Bombers locked up the win with a last second field goal. This game also marked the return of running back Andrew Harris as he ran for 81 yards and a touchdown.

The next two games were against their famed rivals, the Roughriders. Winnipeg won the first matchup on the road with a score of 23-8 during the Labour Day Classic. The Banjo Bowl rematch the following week wasn't much better for the Riders, as again, they lost 33-9. Collaros was on point through the air throwing for 278 yards and two touchdowns.

The defence also had their way as Adam Bighill recorded an interception and Willie Jefferson had two sacks and a forced fumble.

Three of the next four games for the Bombers were against the Edmonton Elks. It started with a 37-22 win in Edmonton to improve to 6-1 on the season.

That win was followed up with a 30-9 victory over the B.C. Lions. Collaros had an unreal game throwing for 417 yards, completing nearly 85 per cent of his passes and throwing for two touchdowns. Wide Receiver Kenny Lawler was the main recipient of Collaros as he racked up 205 yards and a touchdown in the win.

The next two games were a home and home with the Elks, Winnipeg winning both contests 30-3 and 26-16, respectively.

Winnipeg wouldn't take their foot off the gas pedal as the game before their bye week, they asserted their dominance over the Lions once again with a 45-0 win on home turf.

Collaros threw for three touchdowns, two of which were snagged by Lawler, the other was pulled in by Rasheed Bailey.

The defence also had another big game with three sacks and an interception.

The win streak would continue for the Blue and Gold as the Montreal Alouettes would roll into Winnipeg and suffer a 31-21 loss.

Lawler would again surpass the 100-yard receiving mark with 111 total, while Bighill and DeAundre Alford each pulled in an interception.

Montreal would get their revenge a week later with a 28-14 victory. It’s important to note that Collaros did not play in this matchup and Sean McGuire was under centre throwing for 149 yards and a touchdown.

The season ended in Calgary with a 13-12 win for the Stamps. But again, many of the big names for either team saw limited or no action as they rested up for the playoffs.

Winnipeg will be hosting the Western Final against Saskatchewan. The game will take place on Sunday, Dec. 5. Kickoff will be at 3 p.m.

The winner moves on to the Grey Cup on Dec. 12 and will face either the Toronto Argonauts or the Hamilton Tiger-Cats.