The retailer announced the gift of the nearly century-old sprawling limestone building to the Southern Chiefs' Organization on Friday.

"We're very proud the Hudson's Bay Company can help be leaders in reconciliation," Richard Baker, governor and executive chairman of the 352-year-old company, said in an interview.

"For many years, Hudson's Bay Company and the Indigenous Peoples of Canada have co-operated together and this is a new moment of co-operation and partnership. We're shaking hands with our old partners and building a relationship going forward."

Grand Chief Jerry Daniels called the donation a "historic and monumental" step toward reconciliation in Canada.

"The vision really is to create as much opportunity as we can," he said. "We're really focused on economic reconciliation."

The powerful symbolism of having a colonial store in the hands of Indigenous Peoples will stand as a "beacon of hope," Daniels said.

"It will be a place for Indigenous Peoples to come together and work in collaboration to put our children first."

HBC, now a holding company with real estate, department stores and e-commerce operations, started in 1670 as a fur trading business.

It's complex history is closely tied to colonial expansion as it established an exclusive and exploitative trading monopoly with Indigenous Peoples.

The fur trade created a reliance on European-made goods and introduced diseases that devastated Indigenous populations.

Hudson's Bay also claimed sovereignty of much of the land, which it sold to the government of Canada after Confederation amid its increased focus on retail expansion.

The company's Winnipeg store opened in 1926. 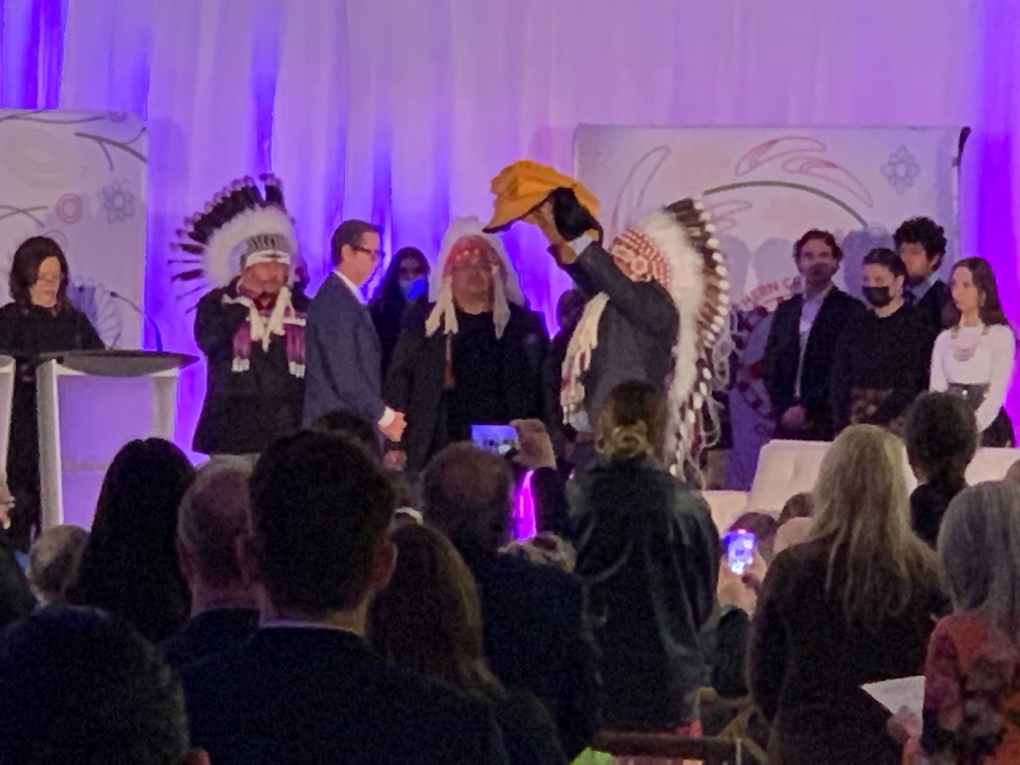 Friday's event to announce the transfer of the building to the SCO. (Source: Jamie Dowsett/CTV News)

"The Hudson's Bay Company has made a lot of money through dispossession in Western Canada," said Sean Carleton, assistant professor of history and Indigenous studies at the University of Manitoba.

"The store downtown is kind of a symbol of that."

The Winnipeg building -- one of the company's "original six" iconic flagship department stores -- has been in decline for many years.

It received heritage designation in 2019 but a valuation that same year found the building was worth $0 due to the significant investment needed. HBC closed the store for good in 2020.

"Offering a building worth nothing (to Indigenous People) is also somewhat fitting in terms of what is being offered back at the end of this process," Carleton said.

He added the building does hold a lot of potential to be transformed into something that matches the needs of the community.

Grand Chief Jerry Daniels said funding has already been secured to ensure the success of the ambitious project.

The six-storey building in downtown Winnipeg will be transformed to include almost 300 affordable housing units, a child care centre, a museum, an art gallery and restaurants.

There are also plans for a health centre that will embrace both western and traditional medical practices and a rooftop garden.

There will also be two restaurants on the main floor of the building - a café that will focus on First Nations' cuisine and a remake of the Paddlewheel Restaurant.

The heritage building's historic facade will be preserved, while the interior renovation will prioritize low carbon materials and reducing energy consumption and greenhouse gas emissions.

It will also become the future Governance House for the chiefs of the southern First Nations, which represent 34 Anishinaabe and Dakota Nations.

The extensive renovation is expected to create jobs during the construction phase and significant long-term employment once complete.

The project's working title is Wehwehneh Bahgahkinahgohn, or "it is visible."

At the event on Friday to announce the building’s transfer to the Southern Chief’s Organization, Prime Minister Justin Trudeau called it a “historic day.”

“For the Southern Chief’s Organization to become the new stewards of the Hudson’s Bay building in downtown Winnipeg is an inspiring and inspired act of reclamation.”

The prime minister announced the government will invest $65 million to support the project.

Trudeau added the government is also investing to co-develop and launch an urban, rural, and northern Indigenous housing strategy. 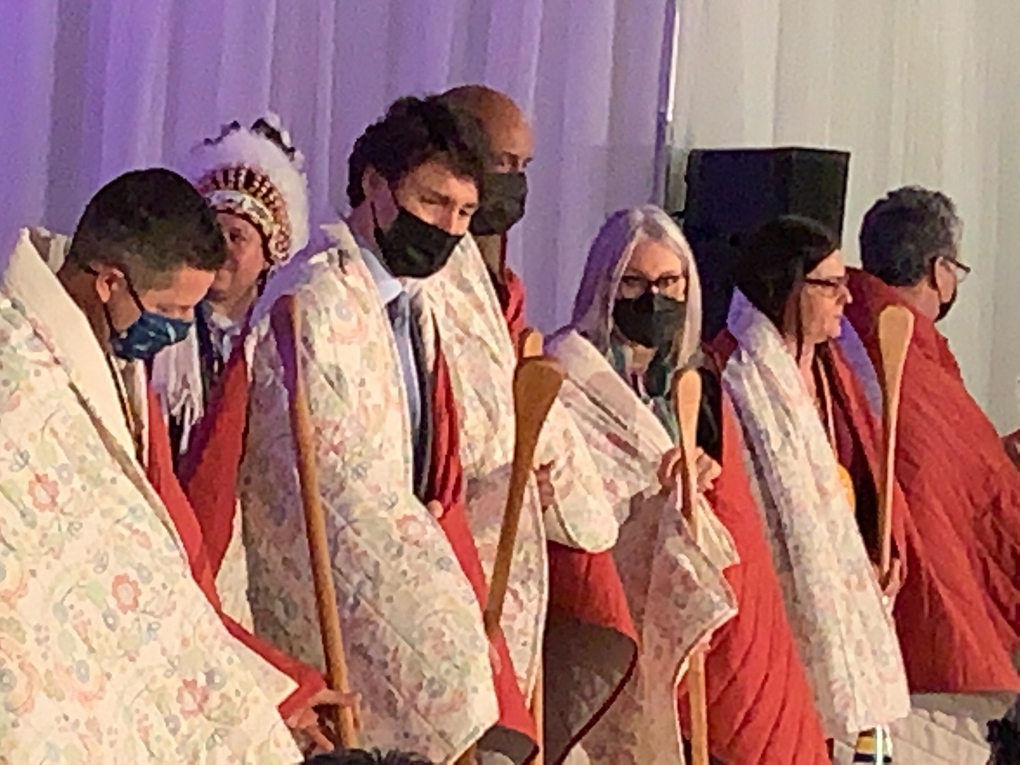 Manitoba Premier Heather Stefanson said it is inspiring to see one of Winnipeg’s most iconic buildings re-envisioned as a place of hope and opportunity.

“This project will be incredibly valuable to downtown Winnipeg and the future of our province as a whole,” the premier said.

Stefanson said as premier, reconciliation is one of her top priorities.

“We are committed to listening, learning, walking a path of reconciliation and working collaboratively together to advance social and economic opportunities for Indigenous peoples throughout our province,” she said

Stefanson added the province is supporting two initiatives of this multi-use project by allocating $10 million to support the affordable housing component of the redevelopment, and by providing $25 million through The Bay Building Fund to support the preservation of the heritage elements of the building.

“We stand together to move Canada’s journey of reconciliation forward, and in doing so continue to transform Winnipeg’s downtown,” he said.

The mayor added that he has many fond memories of the downtown Hudson’s Bay building.

“But when one door closes another opens. This location is prime real estate in our downtown and its closing has offered an opportunity to reimagine how it can continue to have significance for our city,” Bowman said.

-- With files from Kelly Geraldine Malone in Winnipeg and CTV's Kayla Rosen.

This report by The Canadian Press was first published April 22, 2022.

Canada to upgrade Latvia battlegroup to a brigade, boost number of troops

Canada has signed an agreement to upgrade the 2,000-soldier battlegroup it leads in Latvia to a brigade, boosting the number of troops and pledging to lead it for at least the next five years.

DEVELOPING | Opioid manufacturer agrees to $150M settlement after class-action lawsuit led by B.C. asks for $60B

British Columbia says a proposed $150-million settlement with Purdue Pharma Canada has been reached for the recovery of health-care costs related to the sale and marketing of opioid-based pain medicines.

More than half of flights at some Canadian airports getting cancelled, delayed: data

Recent data shows more than half of all flights from some of Canada's major airports are being cancelled or delayed, as frustrations for travellers mount due in part to increased summer travel and not enough airport staff.

Ontario is more than doubling the maximum rate a landlord can raise a tenant's rent next year – marking the highest rent increase guideline in the province in a decade.

NATO calls Russia its 'most significant and direct threat'

NATO declared Russia the 'most significant and direct threat' to its members' peace and security on Wednesday and vowed to strengthen support for Ukraine, even as that country's leader chided the alliance for not doing more to help it defeat Moscow.