WINNIPEG -- A Manitoba man who lives with vision loss said he has filed a complaint with the Manitoba Human Rights Commission over the type of photo identification accepted for entry at Manitoba Liquor Mart stores.

Liquor Mart locations across the province have been outfitted with controlled entrances in response to previously high theft rates.

The new system requires customers to show photo identification to a security guard before they’re allowed inside.

Mike Thiessen, whose vision quickly deteriorated around two years ago, no longer has a valid Manitoba driver’s licence because he’s not permitted to drive.

He does have a CNIB card which he said he uses as photo identification in certain situations, such as picking up a package from Canada Post, but he said that same card wasn’t viewed as an acceptable form of ID at a Manitoba Liquor Mart location.

Thiessen said he found this out when he and a friend went to the 10th Street and Victoria Avenue Liquor Mart in Brandon, Man. around two months ago and the store wouldn’t accept the photo identification he presented.

“My friend provided a driver’s licence and I provided a CNIB card. Security turned me down from entering,” said Thiessen. “They said they would allow me in if I was able to produce another card to verify the CNIB card.”

“When I asked them what I was supposed to provide them, they said my Manitoba Health Card.”

Thiessen didn’t think he should have to provide his health card, because he wasn’t accessing health services, but he did anyway so he could enter the store.

He said he knows he can apply for basic photo identification through Manitoba Public Insurance but feels that’s not the point.

“It’s not about availability, it’s about accessibility,” said Thiessen. 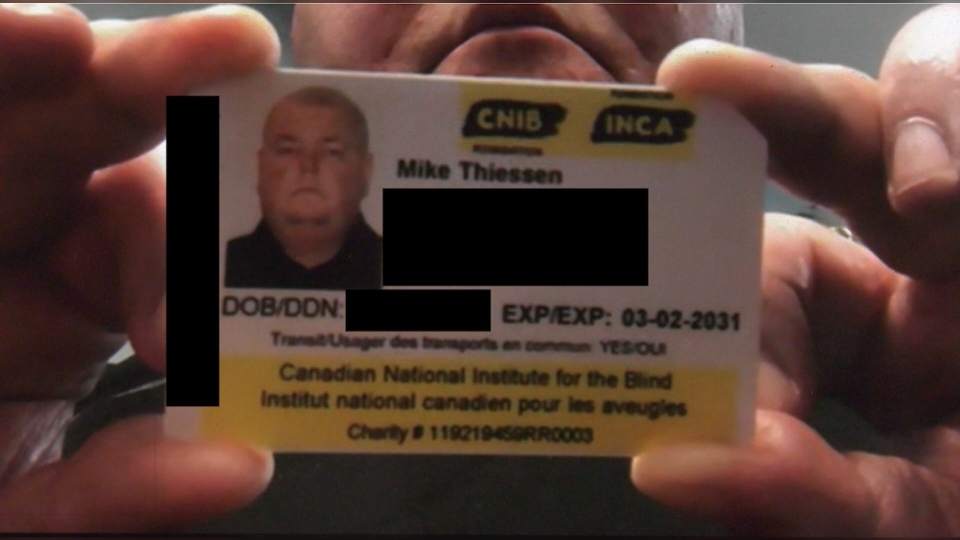 Mike Thiessen holds up a copy of his CNIB Card. Personal information, such as his date of birth and address, have been blacked out. Thiessen said a Liquor Mart in Brandon would not accept the CNIB Card as photo identification, and he has filed a complaint with the Manitoba Human Rights Commission. (CTV News Photo Josh Crabb)

CNIB is a charitable organization that assists Canadians who are blind or living with vision loss. It issues cards, which contain a person's photo, their date of birth, and their address, so they can access discounts and services from governments and businesses such as free transit passes and additional accessibility services.

The organization recognizes the card might not be accepted in all situations but it appreciates when businesses and organizations do accept it.

“The CNIB card confirms a level of vision loss and entitles the cardholder to some benefits. While it’s not government-issued photo identification, we applaud businesses who accept the card as a form of identification for Canadians who are blind or partially sighted,” CNIB said in an emailed statement.

Thiessen said Manitoba Liquor and Lotteries has so far not accepted the card as a valid form of photo identification for entry into its stores.

Days after he visited the Liquor Mart, Thiessen said he brought the issue to the attention of Manitoba Liquor and Lotteries and decided to file a human rights complaint after speaking with the Crown corporation.

In a statement to CTV News Winnipeg, a Manitoba Liquor and Lotteries spokesperson said as a retailer, it is only following what the Liquor, Gaming, and Cannabis Control Act sets out for forms of identification that can be accepted.

Alternatively, two other forms of government-issued ID can be presented as long as one includes a photo.

“Liquor Marts will only accept the same types of ID at controlled entrances as is mandated by the Liquor, Gaming, and Cannabis Control Act regulation for proof of age to purchase liquor,” the spokesperson said. “This is to ensure consistency, so that everyone allowed entry into our stores meets the same ID standards.”

Thiessen feels the CNIB card is a legitimate form of identification that should be accepted.