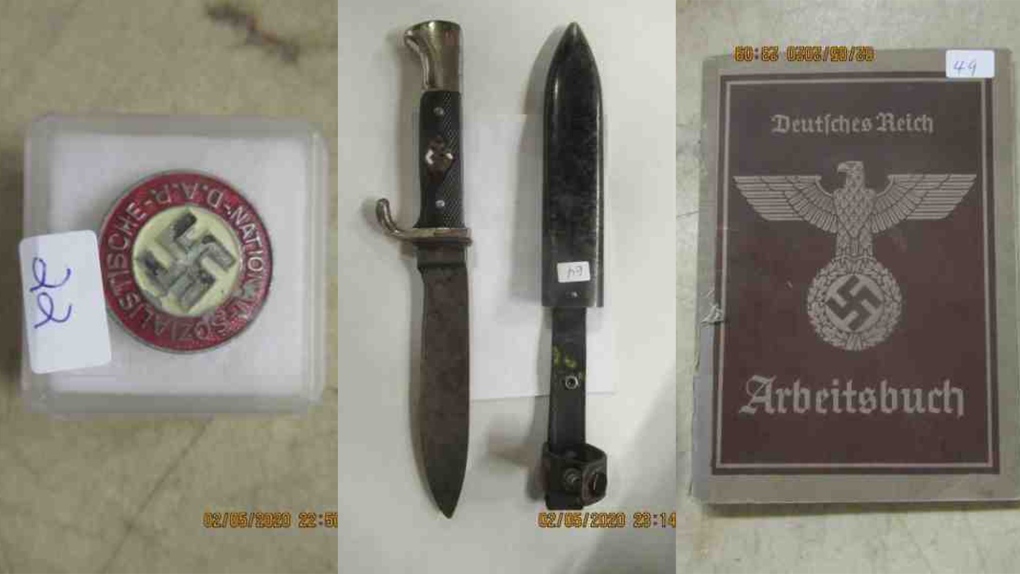 WINNIPEG -- A variety of "Nazi memorabilia" up for auction in Stonewall has a human rights organization calling for the removal of the items, saying items associate with the Holocaust should not be sold for profit.

The Friends of Simon Wiesenthal Centre (FSWC) said in a news release it has reached out to the McSherry Auction Service Ltd., which currently has a number of items from the Nazi regime up for auction.

The items include buckles, literature, coins, and knives engraved with a swastika, as well as a book the FSWC said promotes "racial purity."

"They are selling them for profit – I mean people were murdered because of these items. There's knives, there's books – books that promoted the murder of people," said FSWC president and CEO Avi Benlolo. "Now, unfortunately, we are seeing the rising tide of white supremacism, of Nazism, of nationalism."

He added the Nazi memorabilia belongs in museums and educational institutions that teach people about the Second World War and the Holocaust.

The Canadian Museum for Human Rights agrees, saying it's important for people to understand what these items represent.

"Artifacts can be a really powerful way to connect visitors to subject matter, especially when we are talking about things in the past," said museum spokesperson Maureen Fitzhenry.

"Some of these objects were connected to terrible things, so that's why it's important to contextualize them and use them in that way, to show why they are bad and what they were connected to."

The auction is not sitting well with Rabbi Avrohom Altein.

"People don't seem to realize the horrific meaning of what took place," he told CTV News. "I think that any decent human being would have to condemn this. Not just tolerate this, it should be illegal, it should be stopped. It should be something that in Canada should not ever be tolerated."

FSCW said it has been speaking with the auction house owner and is discussing the removal of the items. FSCW is calling for the items' immediate removal before they "fall into the wrong hands."

The auction is scheduled for Saturday, Feb. 29, 2020. The owner of the auction house declined to do an interview with CTV News but said the auction will be held as planned due to his commitment to the seller.