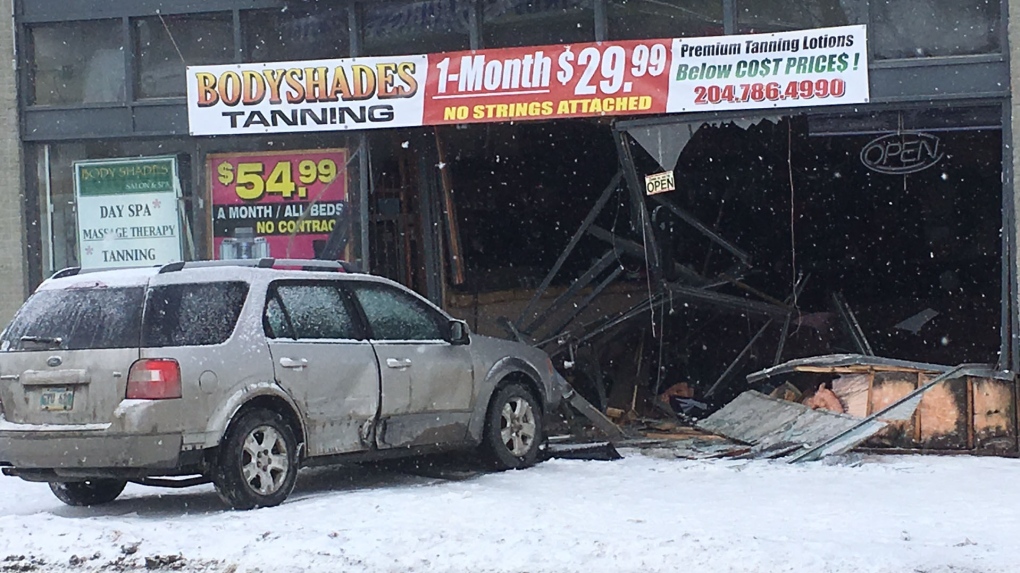 It appears in addition to the Ford, a Toyota car was also involved in the collision, which happened just west of Arlington Street around 9 a.m., witnesses said. (Source: Gary Robson/CTV News)

UPDATE: On Monday, the owner of Body Shades Tanning Spa and Salon told CTV News it has reopened.

Winnipeg police and paramedics attended a collision that sent a four-door Ford vehicle into the front window of a Portage Avenue spa and salon Sunday morning.

Umuerri said inside the vehicle with her were three children, ages four, eight and 11,

“I was shocked. I couldn’t press the brake. I didn’t press the gas. I was just like, 'where are we going?' I was just shouting Jesus’ name,” she said. “When I saw we were approaching the building, I just closed my eyes. I didn’t want to see what happened.”

Umuerri said when she did open her eyes she saw glass shattered around the vehicle. She’s thankful no one was seriously hurt.

“I’m very grateful I don’t have to go to emergency,” she said.

Officials said occupants of the vehicles were assessed at the scene and no patients transported to hospital.

Winnipeg police said Monday a preliminary investigation found a southbound vehicle disobeyed a red light and hit a westbound vehicle, which collided with the business. The driver who disobeyed the red light was issued a ticket.

In addition to the Ford vehicle, CTV News also observed a Toyota car on scene with front-end damage. Two women who collected items from the car declined to speak with CTV News about the incident.

Mel Mozel is the owner of Body Shades Tanning Spa and Salon, the business hit as a result of the crash.

Mozel said he doesn’t have his own insurance, but has been told Autopac will cover the damage.

He said he has been doing some renovations to make it a day spa and has no idea when he can reopen.

Mozel hopes when the window gets boarded up, workers can make a doorway so he’s able to continue serving customers. 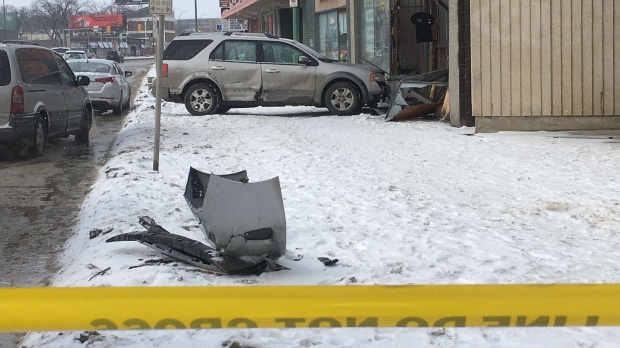