RCMP said Mary Byman, who lives in the R.M. of Piney, Man., was last seen around 4 p.m. Wednesday near Menisino, Man. The Mounties said they received a report Byman was missing around 9:30 p.m. and immediately sent a search and rescue team to the area.

Steinbach RCMP Sgt. Joanne Ryll said the two friends drove about three kilometres south off Provincial Road 201, east of Menisino, to get to their berry-picking spot.

“She was blueberry picking with a friend and at four o’clock they were supposed to meet and she didn’t arrive,” said Ryll.

Ryll said the search started Wednesday and continued until Thursday around 9 p.m. It resumed 8 a.m. Friday.

RCMP search and rescue, the Office of the Fire Commissioner and members of the Piney Fire Department have been joined by at least 100 volunteers.

Byman’s grandson, Jason Geurts, drove from Winnipeg early Friday and asked seven friends to join him to help with the search.

“I just want to find my grandma,” said Geurts. “I want to get her and get home.

“I told them that I needed their help and they were there.”

Byman lives with her husband near the area where she was picking berries, according to RCMP and her grandson.

“She’s grown up here most of her life. She knows this terrain probably better than anyone out there right now.”

Len Friesen echoed those sentiments. He’s a close friend of Byman’s and put his own plans aside to join the search.

“I was going to go blueberry picking this morning but there’s some things that are more important besides work and all of the rest of it,” said Friesen. “We’re really hoping and praying for the best.”

“Is she alive? Is she lying somewhere unconscious?” said Friesen. “Very strange because this woman’s grew up here and she’s bush-wise.

“It’s just the uncertainty that’s so hard to deal with.”

RCMP said area hospitals, as well as the U.S. border patrol and Canada Border Services have been contacted and are on the lookout for Byman.

Volunteer searchers are focused on an area where Byman was picking berries with her friend. They walked down a backroad Friday morning which runs through an area of thick bush and jack pine trees — terrain which makes the search a challenge.

“Some places are not as dense as others so it makes a little bit easier to visually see something,” said Ryll. “Other areas are more dense which makes it a little bit more difficult.”

Ryll said the search will continue Friday until Byman’s found or until it gets dark.

“We are realistic as time goes, chances diminish,” said Ryll. “However, we always want to be thinking positively. There have been cases where people have been in a bushy area for four days and have been located.” 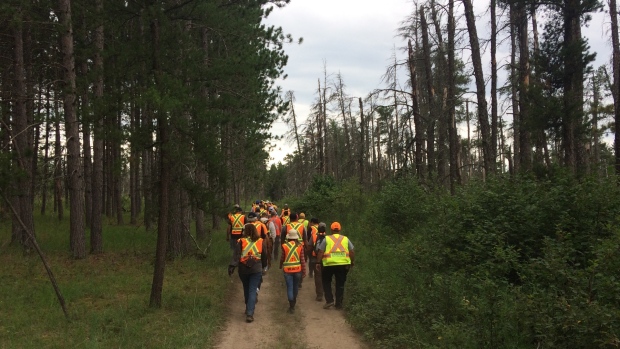 People are searching an area Menisino, Man., for Mary Byman, 84, who was last seen around 4 p.m. Wednesday when she became separated from a friend while the two were picking blueberries. (Jamie Dowsett/CTV News) 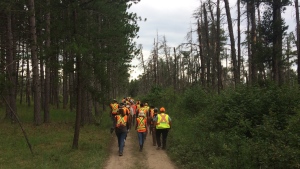