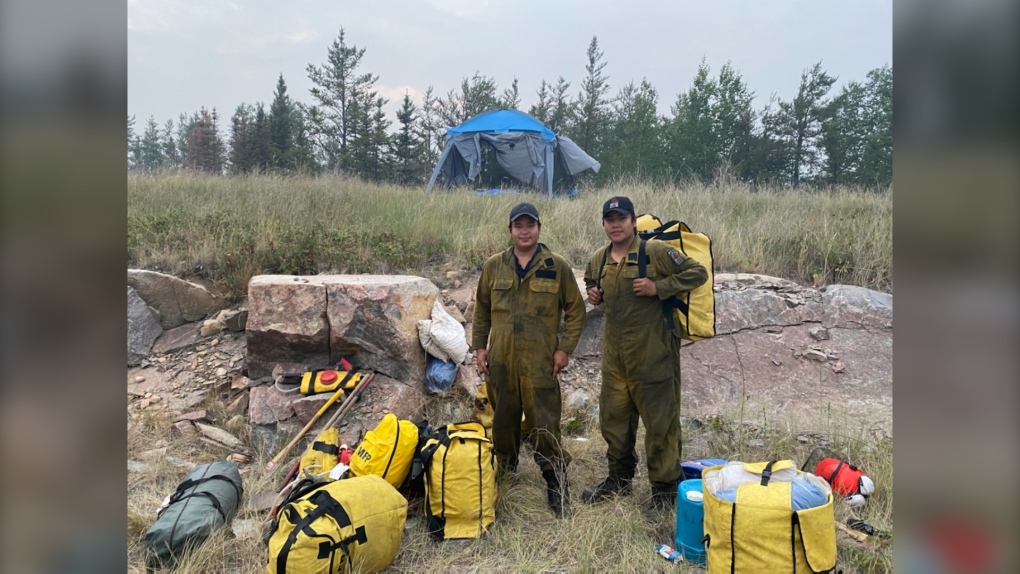 Brody Baptiste and Cody Baptiste pose in this undated handout photo. The two teen firefighters from Berens River First Nation in Manitoba have been assisting with the wildfires in eastern Manitoba since July. THE CANADIAN PRESS/HO - Percy Swain

For years, Cody Baptiste would watch his older brother spend his summers fighting wildfires in Manitoba.

It's a path he knew he eventually wanted to follow.

For the first time this year, he gets to blaze his own path in the field and, at the age of 15, he may be one of the youngest firefighters in the province.

Cody is from Berens River First Nation along the east side of Lake Winnipeg, about 330 kilometres north of Winnipeg.

Wildfires and smoke forced members from the community in July to leave for Winnipeg and Brandon. Growing wildfires on the eastern edge of the province also forced three other nearby First Nations to evacuate -- for a total of more than 2,000 residents living in hotels.

That was when Cody was called to action.

A month earlier, the teenager had completed a training course where he learned the ins and outs of operating a water pump and hose, as well as important safety measures. He didn't know at the time that he would be putting his newfound skills to use a few weeks later.

"I was excited (and) I actually like firefighting now," Cody said in an interview earlier this month.

Cody's older brother Aaron Hudson, 27, started firefighting about four years ago. Hudson urged Cody and their other brother Brody Baptiste, 17, to look into careers as firefighters. Cody tried to get training last year but was told he was too young.

The age to become a seasonal firefighter with the province is 16, but Cody's mother said she signed a waiver giving him permission to work at his age. She said having two teenage sons firefighting doesn't come without worries.

"They're so young. First thing when you get up in the morning you want to worry about them and you want to see how they're doing," said Monica Patrick.

But she said it was important for her to instill a good work ethic in her children. She said she's happy to see the boys make their way in the world and follow in their older brother's footsteps.

"They make me really proud and I'm really glad that they love what they're doing," Patrick said.

The province recently welcomed 100 South African firefighters to help battle wildfires. They join more than 400 local firefighters, as well as other crews from across the country.

Hot and dry conditions linked to climate change have made this year one of the worst wildfire seasons in Manitoba. There have been roughly 430 wildfires this year compared to the average of 370 for this time of year.

Cody spent about two weeks working with his brother Brody and three other men trying to suppress wildfires near Bloodvein First Nation, about 250 kilometres north of Winnipeg.

Four separate fires in the area eventually merged together to form one of the largest single wildfires on record in the province.

Being part of the crew tackling a fire of this proportion was both exciting and scary, he said.

Working in the heat was sometimes unbearable, "when there were big open flames you had to go rush to them very quickly to make sure it doesn't spread," Cody recalled.

An unfortunate tumble in the field has since sidelined Cody. He had to go to Brandon to stay with family in a hotel to nurse a sprained ankle, but he said he's itching to join his brothers again.

"I'm just trying to protect our elders and the other communities," he said.

Residents from Berens River and Bloodvein were able to return home this week, along with two other First Nations, after community leaders determined it was safe.

Asteroid coming exceedingly close to Earth, but will miss

An asteroid the size of a delivery truck will whip past Earth on Thursday night, one of the closest such encounters ever recorded.

Amsterdam has shared a time-lapse video of the construction of its brand-new underwater bike-parking facility.