'I was kind of in disbelief': ARYAN01 licence plate angers Winnipeg man 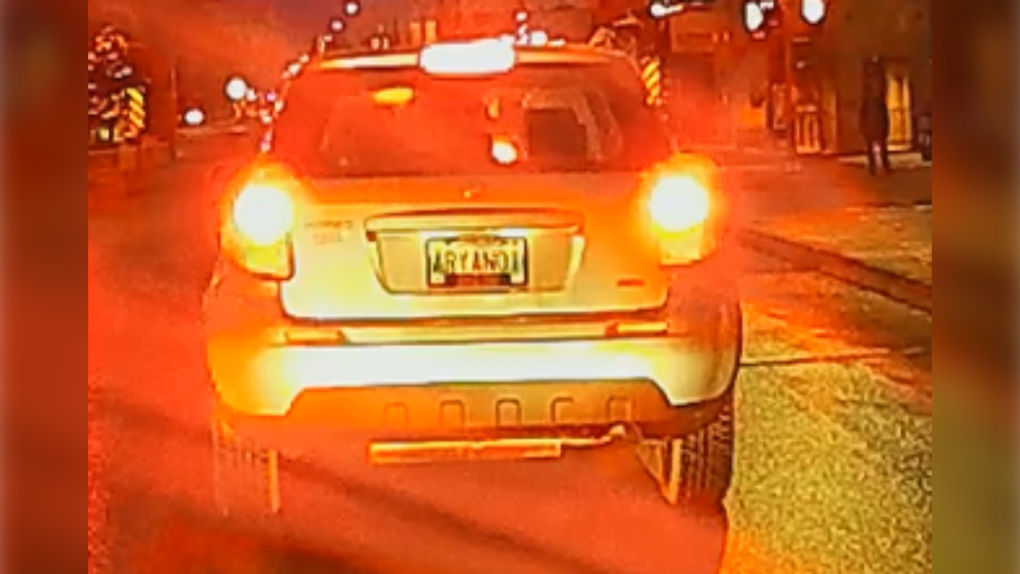 A Manitoba licence plate that says ARYAN01 has been reported to Manitoba Public Insurance by a Winnipeg man who says its offensive. (Source: Ivan Harton/Dashcam photo)

WINNIPEG -- UPDATED: This story has been corrected to add additional context to the definition of the word "Aryan."

A Winnipeg man is voicing concern after coming across a licence plate that he said made him very upset.

During his commute to work, Ivan Harton stopped at a set of lights before driving onto the Provencher Bridge.

He said that’s when he noticed the licence plate of the car in front of him, which read ARYAN01.

"I was kind of in disbelief at first. But then when I realized that is definitely what it says, I kind of got a little bit angry. I was a bit upset by it," said Harton.

According to Britannica Online, Aryan was the name given to people who were have thought to have settled in prehistoric times in ancient Iran and the northern Indian subcontinent. The theory of an Aryan Race appeared in the mid 19th century. Under the theory, the light-skinned Aryans were the group who invaded and conquered ancient India from the north," and whose literature, religion, and modes of social organization subsequently shaped the course of Indian culture.

Britannica said Houston Stewart Chamberlain was the first to use "Aryan" to refer to white people in the 1850s, and his advocacy of the term influenced Adolf Hitler and the Nazi Party in Germany.

Merriam-Webster defines Aryan as "of or relating to a hypothetical ethnic type illustrated by or descended from early speakers of Indo-European languages," and "used in Nazism to designate a supposed master race of non-Jewish Caucasians usually having Nordic features."

Harton says he was still feeling upset after arriving at work, but wasn't sure what to do, noting he isn't from Canada, he is from Ireland.

"I spelled it out to (the MPI agent) and I said the word and he seemed to agree with me and was kind of surprised that this was even out on the road."

Harton said the man on the phone thought the plate could have been out for some time before MPI had a vetting process in place and therefore it wouldn't be known until it was reported.

Brian Smiley with MPI said the company's process includes a committee review of any licence plates in question.

"We use a criteria. We do not want plates that are either offensive, sexually suggestive, racist or have religious overtones," said Smiley.

He said he doesn't have specific information about the plate in question and would have to go through the customer’s file to see why the plate was approved in the first place. However, Smiley said he feels the committee works, as MPI receives around 100 complaints or less in a year.

"For the most part, the plates that are on the roadways, again, a good majority of them have been reviewed. Previous to our committee being formed, plates were dispatched out on a selective basis."

The review committee is made up of six members and Smiley said they also rely on other employees and other groups to help them with some terms they might not be familiar with.

"We also have a number of admin staff that provide Google definitions, Urban Dictionary definitions. We also rely on external groups to provide us with input on verbiage that we're not familiar with, whether it be Punjab or Indigenous in nature."

Harton said the agent he spoke with on the phone said the plate would be reviewed and also felt there was a good chance it would be taken off the road.

While Harton says the plate made him angry, he hopes it was just a mistake or misunderstanding about what the word means by the owner.

"The anger part of it is like, the audacity to flaunt something like that. For me it is such an antiquated idea, ideology of eugenics that should have died out 50 years ago or more.

GETTING A LICENCE PLATE REVOKED

Smiley said once a complaint comes in, the committee will review it when they meet, which is roughly once or twice a month.

He said if there is even one vote against the plate, it is sent to the Registrar of Motor Vehicles for a second opinion.

"Once the plate is reviewed and deemed to be offensive and to be pulled, the owner of that plate will be notified by registered letter of the process and the steps they need to take in surrendering the plate," said Smiley.

He added there is no additional penalty for the person other than surrendering the plate.

Smiley said MPI receives thousands of requests from customers for personalized plates and that roughly two to three per cent of them are denied by the committee.

Harton said if the plate is eventually removed, he hopes the person owns up to it if it was a mistake.

This is a corrected story. It has been updated with additional context and definitions of the historical definition of "Aryan."