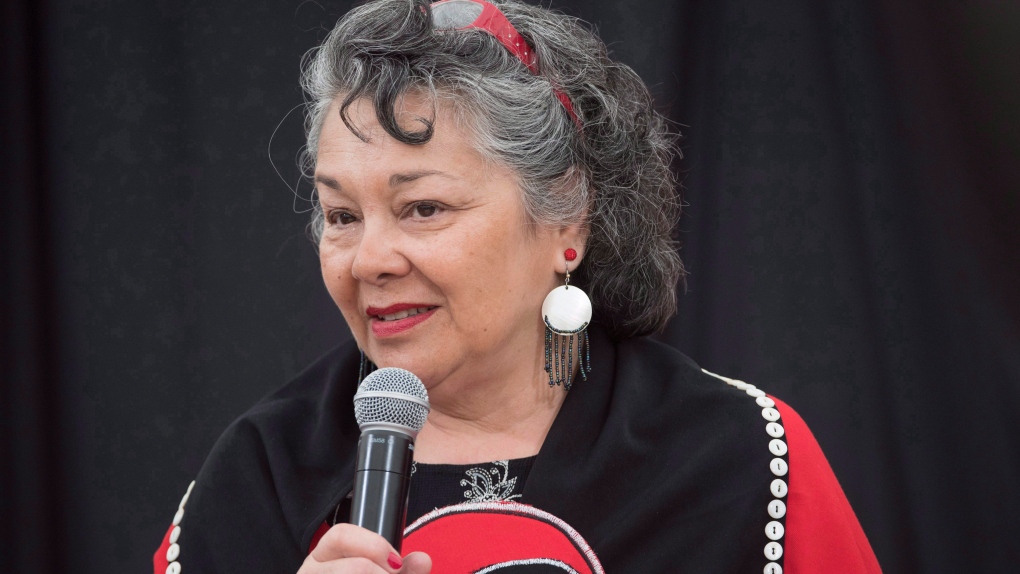 Joan Jack speaks to the commissioners at the National Inquiry into Missing and Murdered Indigenous Women and Girls taking place in Whitehorse, Yukon, Thursday, June 1, 2017. An Indigenous lawyer has filed a lawsuit against the firm that represented survivors of Indian day schools alleging she was not compensated for years of her work on the class-action case. THE CANADIAN PRESS/Jonathan Hayward

WINNIPEG -- An Indigenous lawyer has filed a lawsuit against the firm that represented survivors of Indian day schools, alleging she was not compensated for years of her work on the class-action case.

Joan Jack, 59, who is from Berens River First Nation in Manitoba and is also a day school survivor, said the class-action was her life's work.

"I put my whole life into this file for years, and bankrupted my firm pushing it forward," Jack said in a news release Thursday.

"I refuse to let them whitewash me out of this settlement, which, ironically, is supposed to be about reconciliation."

The Federal Court approved a settlement agreement in 2019 for survivors of day schools. It included $55 million in legal fees for the international law firm Gowling WLG.

In a statement of claim filed last Thursday in Winnipeg, Jack said she was responsible for initiating the original day school student claim and spent years making sure survivors got justice. She alleged Gowling took over the case and she was never compensated.

Gowling has not filed a statement of defence and the allegations have not been proven in court.

"The allegations made in the Statement of Claim are without merit and will be vigorously defended," said Simone Hughes, director of business development and marketing with the firm, in an email.

"As this matter is before the Courts, we will not make any further comment."

Nearly 200,000 Indigenous children attended more than 700 of the federally run institutions beginning in the 1920s. Many have said they endured trauma, such as physical and sexual abuse. The schools were not included in the Indian Residential Schools Settlement Agreement approved in 2006.

The original lead plaintiff in the day school claim, Garry McLean from Lake Manitoba First Nation, retained Jack as his lawyer in 2008, Jack's statement of claim said. Jack filed a class-action in Manitoba Court of Queen's Bench in 2009.

Jack's claim said she worked on the case for the next seven years, knowing it was risky, and her own small firm was bankrupted in the process. She travelled across the country, connecting with thousands of survivors and created a database of their information. She said that information was essential to the final settlement.

Winnipeg lawyer Louay Alghoul began working with Jack on the case in 2012.

Four years later, Gowling took over the file. Jack's statement of claim alleges Gowling promised to include her claim for fees in the settlement process. Her suit alleges the fees for her and Alghoul amounted to about $7 million.

However, Jack asserts that Gowling actively worked against paying the fee.

Jack's claim alleged a breach of trust and contract. It said Jack has also been robbed her of confidence and ability to stand up for her people.

"The whitewashing of this fundamentally and intrinsically Indigenous action is deserving of aggravated, exemplary and punitive damages," said Jack's claim.

Jack said her case shows the systemic racism and misogyny that's entrenched in the justice system.

"What's happened to me is a reflection of the larger issue around misogyny and Indigenous women," she said in an interview from Atlin, B.C.

This report by The Canadian Press was first published Sept. 17, 2020.