Indigenous leaders in Manitoba rally in support of Mi'kmaq fishers

WINNIPEG -- Indigenous leaders in Manitoba have been holding ceremonies and rallies in support of the Mi’kmaq fishers.

On Wednesday, Indigenous leaders from across Manitoba gathered in unity and solidarity, sharing messages of solidarity with Mi’kmaq fishers, who are currently part of an ongoing dispute with commercial lobster fishers in Nova Scotia.

Among the issues in this dispute is Indigenous people’s right to make a ‘moderate livelihood’ and fish outside the federally-determined fishing season. These rights were put into place in treaties hundreds of years ago and upheld by the Supreme Court in 1999.

Now, some non-Indigenous critics are highlighting a clarification issued by the court that says the rights were to be subject to federal regulations as proof the rights could be reinterpreted.

According to the government of Canada’s website, the treaty of 1752 with the Mi’kmaq people states 'It is agreed that the said Tribe of Indians shall not be hindered from but have free liberty of Hunting and Fishing as usual."

As riders prepare to leave RCMP headquarters towards the Manitoba legislature the message from Indigenous leaders in Manitoba to the Mi’kmaq people is you are not alone.

“The aboriginal treaty right are constitutionally protected. under section 35 of the constitution of Canada and today Canada has broken their own constitution by failing to intervene with the protection of our people in Nova Scotia,” said Manitoba Keewatinowi Okimakanak Inc. Grand Chief Garrison Settee, adding Indigenous people will not back down he adds.

“And why is it when we want to protect our lands, an army is sent to stop us, but when we’re being attacked the RCMP just stands by and do nothing. This is unacceptable,” said Settee.

He said if no one will protect the rights of Indigenous people, they will stand and protect their rights.

“The Mi'kmaq people have always held up their side of the bargain to have peace and to have friendship and yet today they are under attack,” Kinew said, adding they are practicing their rights responsibly.

Among the crowd gathered at the legislature was Bethany Wilson from Peguis First Nation.

“It really broke my heart that we have these treaties signed and that government isn’t following through with what has been signed for a reason. So, for me when we have the things going on in B.C., people are being arrested for protesting and then we have on the east coast, Non-Indigenous people doing things to our people and not being arrested,” Wilson said

She said Trust and respect can’t be built that way.

-With files from CTV’s Ben Cousins and Jonathan Forani. 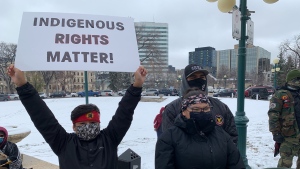