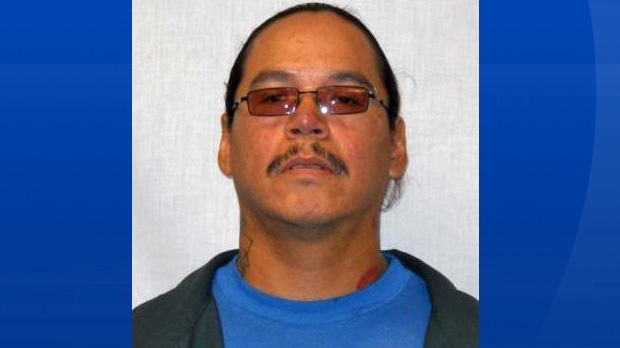 Richard Daniel Wolfe is charged in connection with a sexual assault in Fort Qu'Appelle. (RCMP handout)

PRINCE ALBERT, Sask. -- An inmate who founded the Indian Posse street gang with his brother has died after being found in need of medical attention in the exercise yard of a Saskatchewan prison.

The Correctional Service of Canada says that Richard Daniel Wolfe, 40, was taken on Friday from the Saskatchewan Penitentiary in Prince Albert to hospital, where he was pronounced dead.

A news release from the agency says the circumstances of the incident are being investigated, but offers no further details on what happened.

Wolfe was most recently sentenced in January to five years for an attack and sex assault on a couple in Fort Qu'Appelle in 2014, which happened while he was on statutory release from a nearly 20-year sentence for attempted murder.

Wolfe was the brother of Daniel Wolfe, who was killed during a brawl at the Saskatchewan Penitentiary on Jan. 4, 2010, while he was serving time for a double murder.

The brothers founded the Indian Posse gang. Richard Wolfe told the Winnipeg Free Press in 1994 that the gang was started in the basement of his mother's home.

He said there were five kids that night in 1989 -- urban aboriginals, poor and from broken families, with abusive backgrounds and substance abuse problems.

"We chose Indian because we are all Indians, and Posse because it means family," said Wolfe, who was 19 at the time he was quoted in the story.

The gang has been linked with crime and violence in and out of prison walls for many years.

Officials said an 18-hour riot at the Headingley Correctional Centre in Manitoba in 1996 grew out of a feud between the Indian Posse and a rival gang, the Manitoba Warriors. Eight guards and 31 prisoners were beaten.

Alberta's Criminal Intelligence Service, in a report from 2005, said the Indian Posse street gang had built drug networks south of Edmonton and in Fort McMurray, Grande Prairie and Peace regions. Residents of the Samson Cree Nation in Alberta also blamed a rivalry between the Indian Posse and other gangs for a crime wave that included the shooting of 23-month-old Asia Saddleback, who survived after she was hit by a stray bullet while in a home in 2008.

And in 2010, RCMP included the Indian Posse among a list of native gangs, which also included the Native Syndicate and Manitoba Warriors, that they said had spread across the West and were even in rural areas of B.C., northern Ontario and the Far North.

Wolfe's sentencing hearing in November for the Fort Qu'Appelle attack was told that he had a childhood in Manitoba marred by abandonment, addiction, domestic violence and sexual abuse.

The couple he assaulted was helping him turn his life around after his last release from custody. But the hearing was told that Wolfe had broken his sobriety and sexually assaulted the woman, then attacked her boyfriend with a baseball bat when he awoke to her screams.

At the time of the attack, he had managed to stay sober for a period of time and had begun speaking to young people about the dangers of gang life.