Is this your ring? Manitoban looking for the owner of long-lost wedding band from 1957 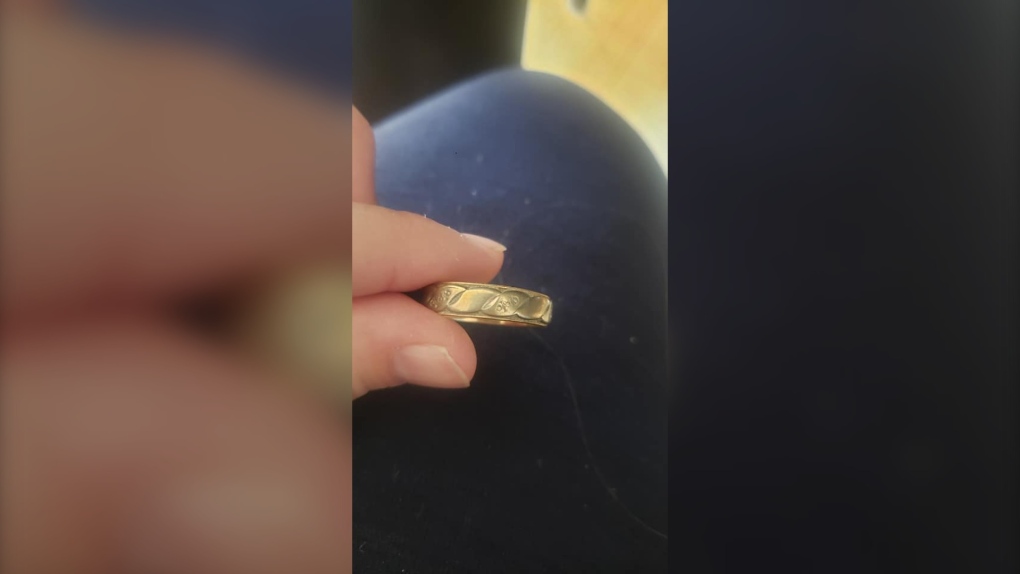 A Manitoba woman is looking to return a long-lost ring to its rightful owner after it has sat in storage for about 25 years.

The ring in question was found by a Bible camp counsellor many years ago, and whose efforts to return it fell short.

Now, Nicole Gryde, the finder of the ring, is trying once again to reunite the ring to the owner or the owner’s family, and hopes social media may be the tool needed to finally do so.

“At the time, Facebook wasn’t a thing and I was a teenager and just picked it up and thought this is cool and honestly I put it in a box, and it’s just moved around from house to house with me,” Gryde said.

The ring appears to be a man’s gold wedding band with some visible inscriptions on the inside: ‘D.S. loves T.A. 29/5/57.’

Gryde found the ring in the waters of Fisher Bay in Lake Winnipeg, just off the shore in an area where campers from Fisher Bay Bible Camp would swim.

“We were walking along the beach there and the water was actually extremely low that day, so we were able to go in and see more ground than you normally can,” said Gryde.

A few months ago, the ring resurfaced during a house cleaning and Gryde thought now is the time to try again and find its rightful owner.

With hopes of someone recognizing the ring or its engravings, she posted an image of the ring to Facebook with a short story on how and when the ring was found.

So far, there have been no responses.

Gryde said the next steps in the search may include a search of marriage registries, but that hasn’t happened yet.

“I would love to hang onto it until somebody, whoever’s it is, or a child or grandchild, or someone who may know these people would get it back.”