Is Winnipeg safe? How residents feel, according to a CTV News poll

Is Winnipeg safe? How residents feel, according to a CTV News poll

The sense of safety is slipping for many Winnipeggers, with a majority of residents saying they feel their neighbourhood safety has decreased in recent years. One community advocate says crime has become more visible and is calling on citizens to help address the root causes.

The safety concerns are revealed in a new Probe Research poll, commissioned by CTV News Winnipeg and the Winnipeg Free Press.

More than half of the respondents (51 per cent) told Probe Research they feel less safe in their own neighbourhoods than they did three years ago. Residents living in the city's core and northwest areas were more likely to feel their areas are less safe. 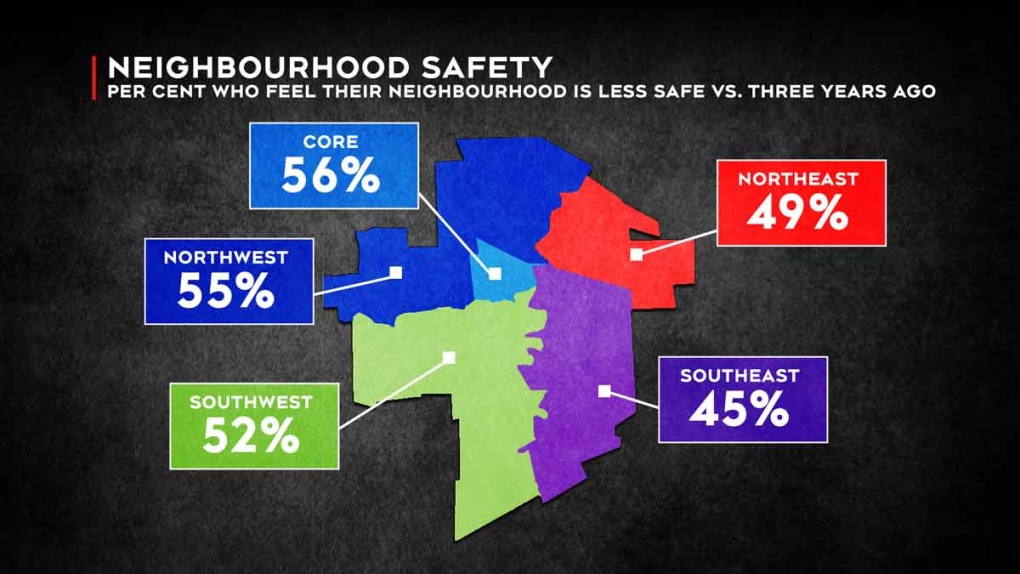 Only about six per cent of Winnipeggers feel their neighbourhoods have become safer.

The slipping sense of safety is not confined to neighbourhoods. The polling finds nearly eight in 10 Winnipeggers feel the city overall is less safe than it was three years ago. 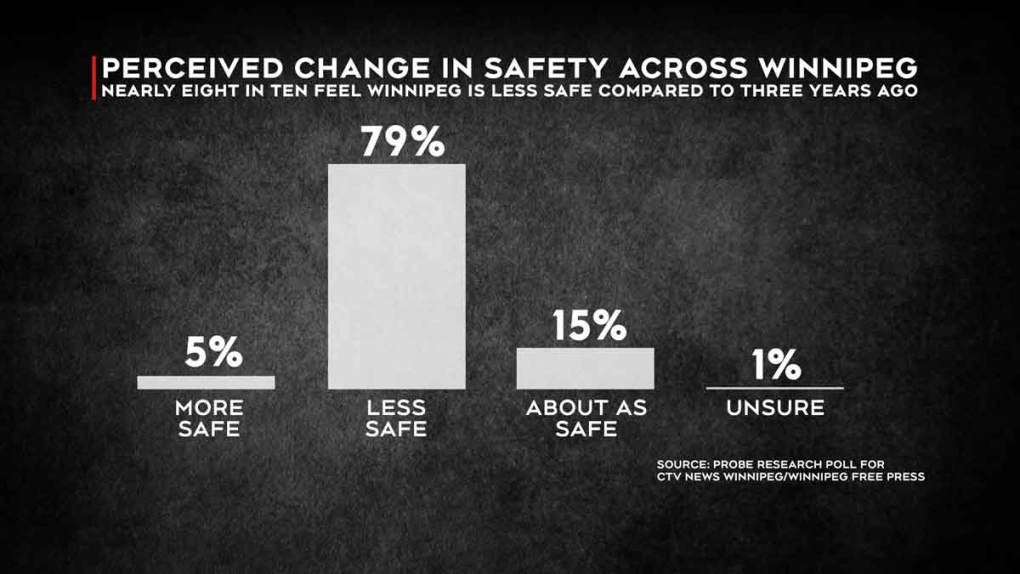 Those over the age of 55 were more likely than other age groups to feel the city has become less safe over time; 87 per cent of respondents in that age group said Winnipeg is a lot or a little less safe.

Homeowners were also more likely to believe the city is less safe (83 per cent) compared to renters (69 per cent).

PANDEMIC SHONE A LIGHT ON ISSUES

Mitch Bourbonniere, a community outreach worker with the Downtown Community Safety Partnership, says he believes the issues facing the city have become much more visible during the COVID-19 pandemic.

"It shone a lot of light on the need of our most vulnerable in our city," he said. "I just think every city right now in the world is having challenges serving their most vulnerable members of their society. And we're no different here in Winnipeg."

He said while the perception of safety for Winnipeggers may be dropping, anyone can play a role in changing that.

"It's incumbent upon us to get together to address these concerns and address them in a root cause global manner where we are looking at poverty, we are looking at mental health, addictions, all of that," he said. "That in itself will have an impact on our safety and on the crime rate."

He pointed to the work of groups including the Bear Clan, the Mama Bear Clan, the Thunderbirds, Community 204, OPK, as well as a new program in Osborne Village called the Sabe Peace Walkers.

"We've got at least a dozen strong citizen-led grassroots volunteer programs," he said. "I think the more we can get out here and add vibrancy to our city, the safer it's going to get."

FOUR IN 10 SAY THEY HAVE BEEN VICTIMS OF A CRIME

For many of the respondents, the safety concerns hit close to home. Four in 10 Winnipeggers reported being the victim of a crime at some point in the past three years. 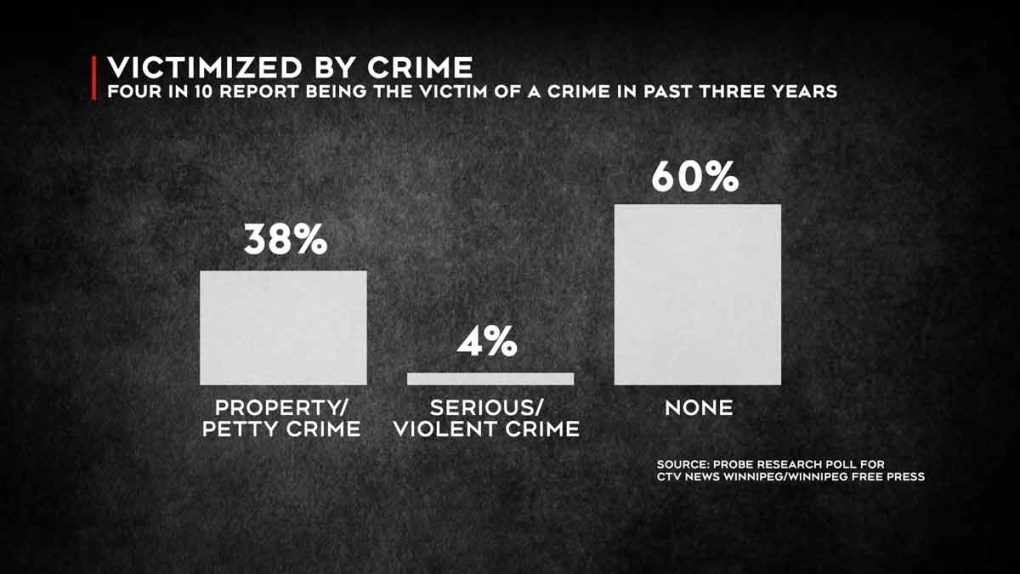 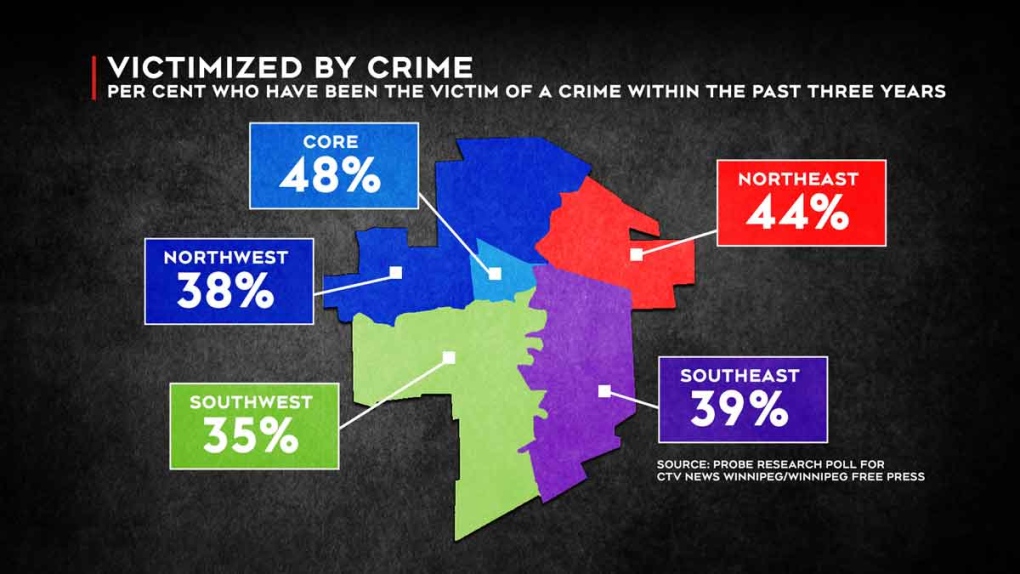 Winnipeggers living in the city's core were more likely to say they were victimized by crime in the last three years, compared to other parts of the city.

Those between the ages of 18-34, those who make more than $100,000, those with a high school education or less, and those who have children at home were also more likely to indicate they were a victim of a crime in the past three years. 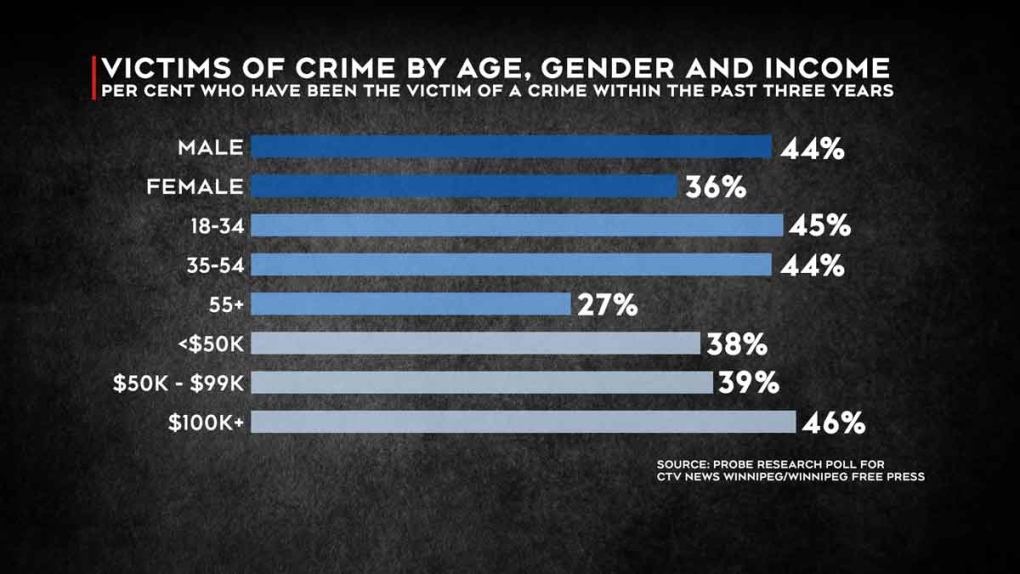 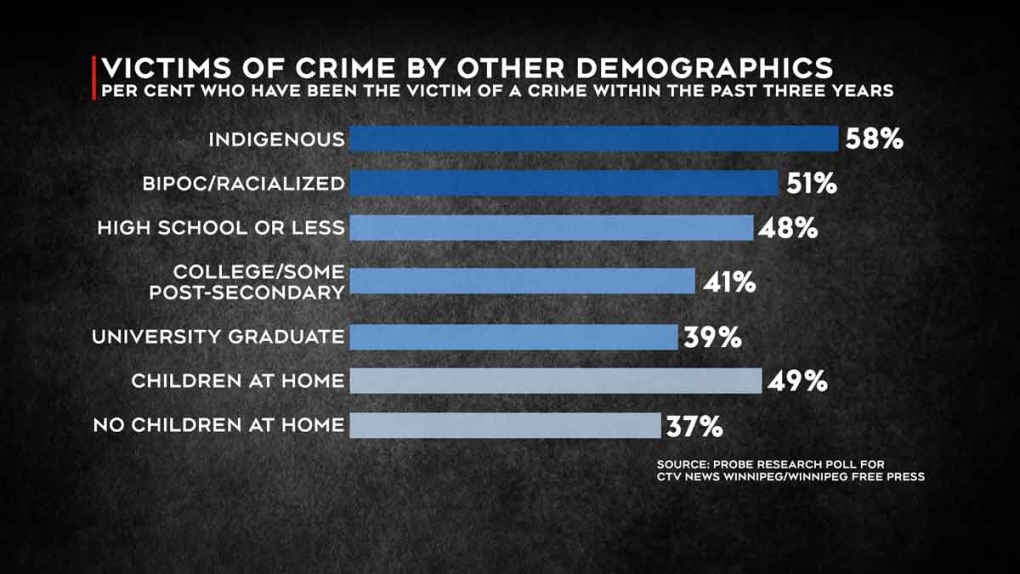 ADDICTION SERVICES A 'PRIMARY FOCUS' IN DEALING WITH CRIME: PREMIER

This comes as the city nears a grim record. According to police, 41 people have become victims of homicide in Winnipeg. With three months left in the year, the city is nearing the 2019 record of 44 homicides.

"There has been a general rise in levels of violence that we really haven't seen before," Jay Murray, a public information officer with the Winnipeg Police Service, told reporters earlier this week.

"That in turn has translated into a higher homicide count."

In speaking to CTV's Nicole Dubé on Tuesday, Premier Heather Stefanson said the province is looking and learning from what other jurisdictions are doing to deal with crime.

"What we want, obviously, at the end of the day, is to make sure that our streets and our neighbourhoods are safe for Manitoba families," Stefanson said.

Pointing to the province's five-year action plan, Stefanson said more support for Manitobans who want to get off addictions is going to be the province's primary focus.

Bourbonniere said all social issues are intertwined and will need a multifaceted approach to deal with.

The results from this poll were collected by Probe Research with a random survey of 600 adults living in Winnipeg between September 8 and 18.

Probe Research says, with 95 per cent certainty, the results are within a +/- 4.0 percentage points of what they would have been if the city's entire population was surveyed. It said the margin of error is higher within the survey's population subgroup.

Prime Minister Justin Trudeau made an appearance on Friday's episode of "Canada's Drag Race: Canada vs. the World" to offer the contestants words of inspiration before the main challenge.

A new study has confirmed the authenticity of an ancient Roman coin long considered fake but which researchers now believe depicts the image of a forgotten emperor.

Prime Minister Justin Trudeau gambled just by showing up. And he appears to have won in the court of reasonable public opinion, Don Martin writes in an exclusive column for CTVNews.ca.

'What if the worst had happened': Trudeau explains why he invoked Emergencies Act when he did

On the stand at the federal inquiry examining the federal government's invocation of the Emergencies Act, Prime Minister Justin Trudeau revealed candidly that a central factor in his historic decision to enact unprecedented powers to shut down the 'Freedom Convoy' protests, was his fear of what could happen if he didn't.

NASA's Orion capsule entered an orbit stretching tens of thousands of kilometres around the moon Friday, as it neared the halfway mark of its test flight.

A marriage annulment that removed a B.C. woman as a beneficiary from her ex-husband's pension plan has been cancelled after a judge determined an "imposter" had agreed to the terms in court.