'It could have been pretty bad:' 911 lessons help six-year-old in Manitoba save her mother during medical emergency 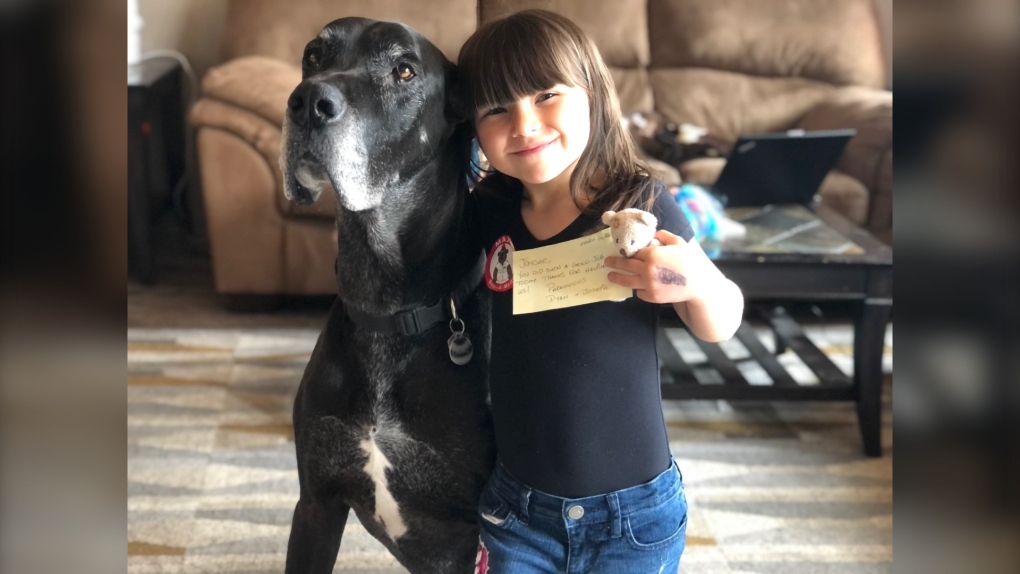 Jaycee Berezowski holds a bear and message given to her by paramedics who helped her mother (Source: Jenine Berezowski)

WINNIPEG -- A quick thinking six-year-old potentially saved her mother after a post-surgery reaction to medication left her unconscious on the bathroom floor.

The mother, Jenine Berezowski, said if it wasn’t for an important lesson on what to do in an emergency, the day’s ending could have been much different.

“Out of nowhere, it just hit me so hard. My stomach and chest just tightened, insanely painful, and I fell to the ground and Jaycee saw I was in distress,” said Berezowski.

Jaycee is Jenine’s six-year-old daughter. A couple of years ago, Jenine taught her how to call 911 on her cell phone, even if the phone was locked, in the case of an emergency.

An emergency did happen a couple of days after a Tuesday, March 23, dental procedure in Winnipeg to remove some wisdom teeth.

Jenine, who is a Dauphin resident, was recovering from the surgery at a friend’s home with Jaycee. She said the first couple of days following the procedure were rough, but by Friday, her head had started to clear. Jenine said she had been prescribed some heavy drugs due to a high sensitivity to codeine and an inability to take to some of the more common pain medications.

The reaction happened while sitting on the couch with her daughter on the Friday. Jenine said she was feeling nauseous and tried to make it to the washroom.

“I remember I started blacking out, and I could hear that Jaycee was on the phone with 911,” said Jenine. “Then I guess I passed out on the bathroom floor and then I finally came to with everything going on. There were paramedics around me, Jaycee was there, I had family. All of a sudden, it was just commotion.”

The seriousness of the situation was not lost on Jaycee. Not only did she call the paramedics, she guided them to her mother, and handled Duke, their pet Great Dane, who was standing guard over Jenine and not wanting anyone to come into the house.

“He’s giant, like a horse,” said Jaycee. “I felt nervous, and I felt pretty good about my choice of what I did.”

“I think it could have been pretty bad. I mean, I was passed out on the floor, so that was pretty scary and I don’t know what would have happened if she wasn’t here," said Jenine.

She has since recovered and returned to work teaching kids at MacKenzie Middle School in Dauphin.

After spring break, she asked her Grade 6 class how many knew of them how to call 911 without dialling, a lesson she taught to Jaycee when she was four, and was surprised to find out only half of the class had been shown.

“It’s so important. They don’t have to know how to unlock the phone, but it’s so important to teach your children how to call 911, and I don’t just mean dialling 911, but it’s as easy as doing it by swiping, if can you can press the two buttons on your phone,” said Jenine.

“When I taught Jaycee, I never actually thought the day would come where she would actually have to do it.”

As for Jaycee, a future in health-care may be in the cards. She’s wanted to be a doctor for a while, according to her mother, and now she’s got a little bit of experience in helping others.

As a thank you for a job well done, Jaycee received a little gift from the paramedics.

“I got a little bear and a note and some stickers. The stickers said ‘Bearamedic,’” said Jaycee.