CALGARY -- It started on Nov. 8 with an impulse decision to make the 1,300 kilometre drive from Winnipeg to Calgary to watch the Winnipeg Blue Bombers and Calgary Stampeders in the West Division Semifinal.

“You know what, it’s been very special. It’s been great,” Joey said.

After being separated for three years, Joey finalized a divorce from Hayden’s mother Christie over the summer. He then made a goal to make up for lost time with his two kids, Hayden and 19-year-old Rylee.

“I haven’t seen them a lot in the past two, three years,” he said. “I’m kind of reconnecting and building new relationships with my children.”

The father-son duo has racked up plenty of kilometres following the Bombers across western Canada during the 2019 Canadian Football League playoffs.

“Oh my gosh, I think we’ve put on probably 5,000 I think, from the very first playoff game,” Hayden said. 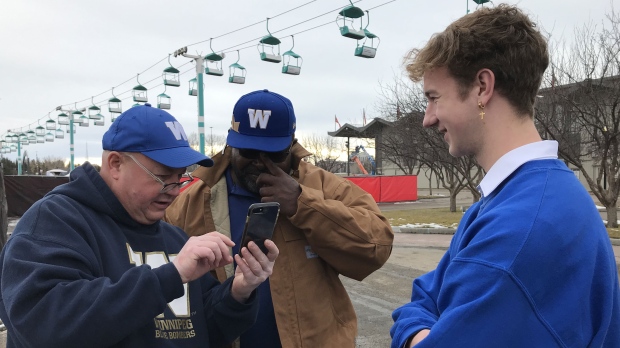 After the Bombers disposed of the Stampeders, it wasn’t a difficult decision to drive to Regina for the West Division Final the following Sunday.

“The Winnipeg and Saskatchewan rivalry, like we sort of had to,” Hayden explained. “And it was a pretty big win in Calgary, so it was pretty much just like we had to.”

A win over the Saskatchewan Roughriders propelled Winnipeg to the Grey Cup in Calgary which, of course, meant the pair was in for another long road trip.

“We talked about a lot of things that we haven’t talked about in the last number of years, and I’ve gotten to know him a lot better,” Joey explained. “We’re having fun, we’re laughing, we’re making silly jokes, we’re listening to music. It’s just been a really great bonding experience.”

“I talk about school a lot of the time,” Hayden said. “Like past trips we’ve gone to, dance, like anything.”

The time spent on the road, and the talking, cheering for the Bombers, and now a trip to the 107th Grey Cup, has brought them closer together.

“That was sort of the idea originally,” Joey said. “The games have been secondary. They’ve been a very a close second. Don’t get me wrong, I’m a huge Bomber fan, we’re big Bomber fans. But I think, you know, the main goal was to have this time together really.”