'It's not a competition, it's a movement': Manitoba university athletes join forces to stand up to racism 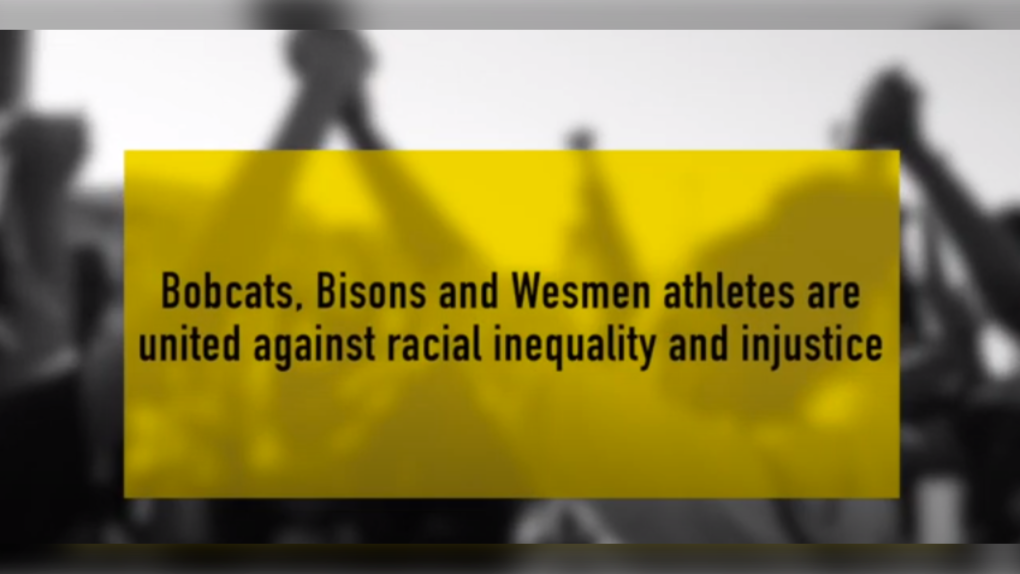 WINNIPEG -- Student-athletes at three Manitoba universities have joined forces to take a stand against racism.

Athletes with the University of Winnipeg Wesmen, University of Manitoba Bisons, and Brandon University Bobcats created a video to show despite competing against each other on the court or the field, they stand as one against racism and racial injustice.

The video, which is one minute and 32 seconds in length, features three athletes from each school, voicing how they must stand together and that is bigger than sports.

"When the games are on, we are rivals, we're competitors, we battle for everything, we refuse to back down. But there are things we see that are bigger than sport," the athletes say in the video.

Joshua Gandier, who is part of the video and on the Wesmen men's basketball team, said the idea came after the U of W did its own Black Lives Matter video in the summer.

"The idea came up to unify the three rival universities for a solidarity message," said Gandier. "We wanted to show that, even though we are competitors and rivals in sport, we are unified in matters that are important to us."

Keziah Brothers, who is also part of the video and is on the Bisons women's basketball team, said she first was told about the project in an email from personnel at the U of W.

"It was encouraging. I was glad to see that the universities in Manitoba were actually doing something," she said.

Brothers added she was happy with the process of making the video and how open everybody was to changes for the script.

"I was actually in contact with fellow athletes throughout the process of creating the video," she said. "We were wondering who wrote the script, what was the process of it. Were Black athletes or Black staff members involved in the creation in the video and it was very clearly stated that we had full allowance to make any changes and suggest anything that we wanted."

Gandier said the hope is the message would resonate on the campuses and also show that student-athletes are taking a serious stand on important issues.

He added it was important for him to be part of the video because he has played on many diverse teams and he has heard the experiences from some of his Black and Indigenous teammates.

"It's something that people are often quiet on and I thought stepping up to show that this is something important that needs recognition, that others will have the courage to step up," he said.

The video finishes by saying, "it's not a competition, it's a movement."

Gandier said there has been a lot of positive feedback from students, teammates, and coaches at all of the schools and everyone around him recognizes this is not a subject that people can take lightly.

Brothers voiced a similar sentiment that she has received a lot of congratulatory messages for being in the video.

She did note that this video is just a start and more still needs to be done by universities in Manitoba and across the country in standing up to racism and racial injustice.

She said a good step would be to have racial injustice education in every single classroom on campuses.

"It's not just something that can be wiped off the table. It's not something that one can make an Instagram post of and then not do anything about. Education is the first step, however, actually having conversations and understanding the struggle that it is to be a Black person or an Indigenous person, or a BIPOC member."

She added that it might be uncomfortable for some, but it is better to have an uncomfortable conversation than actually experience racism.