'It's shocking': Long road to recovery for Manitoba pup with extreme skin disease

WINNIPEG -- WARNING: The pictures in this article may be disturbing to some viewers. Discretion is advised.

A Manitoba animal rescue says it will be a long road to recovery for a puppy with one of the worst cases of mange the rescue has ever seen.

The Manitoba Underdogs Rescue said it is looking after a little pup named Starke who has an extreme case of the skin disease.

Starke, a five-month-old Labrador cross, was found by an RCMP officer on a rural community in Manitoba.

"The RCMP officer contacted Manitoba Underdogs Rescue and we brought him into care and got him to see a vet pretty quickly," said Lindsay Gillanders, a volunteer at the rescue.

"He's in pretty bad shape – it's one of the most severe cases of mange we've ever seen."

The dog's mange covers the majority of its face, with one eye partially swollen shut. Gillanders said the kind of mange Starke has is caused by parasitic mites that have taken over due to a compromised immune system.

She said they have done quite a bit of damage to the dog's fur and skin. It's a condition that can be really sore, itchy, and raw.

“It’s shocking,” Jessica Hansen, the executive director of the rescue, said in a news release.

“He’s such a sweet pup despite being in such bad shape. We see a lot of tough cases doing the work that we do, but this little guy is particularly heart-wrenching. To think that he was in so much pain is overwhelming.” 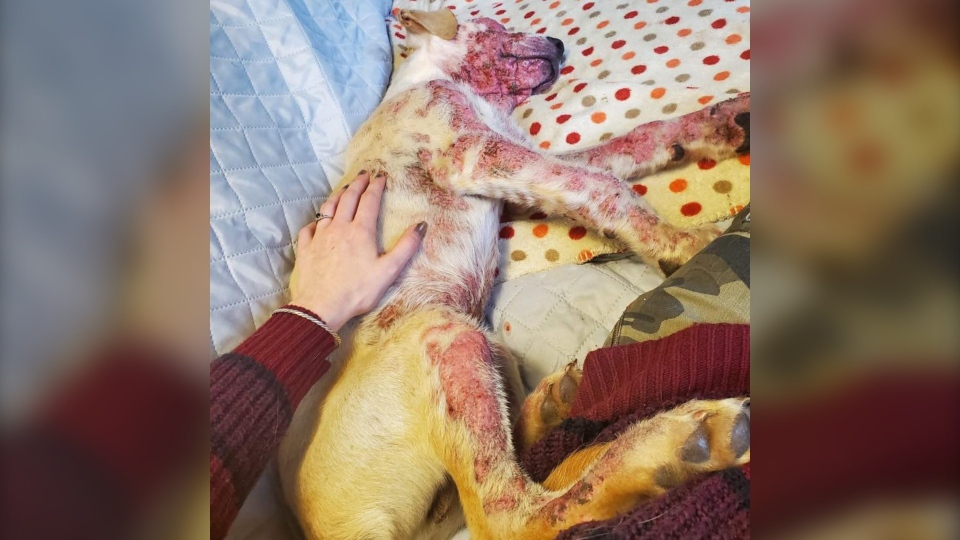 Gillanders said the vet is estimating it could be three months or more before Starke is fully recovered. Starke has been given medication and has since been placed with a foster family.

She said if people are not able to donate money, they can donate food, or become a foster family.

More information about donations to the Manitoba Underdogs Rescue can be found online.