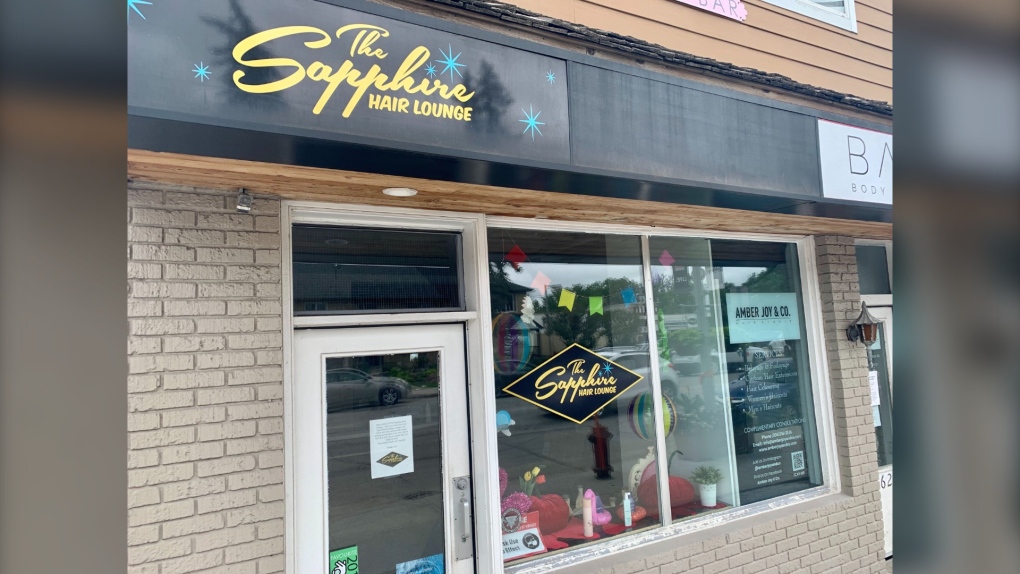 The Sapphire Hair Lounge on Academy Road is pictured on June 10, 2021. Manitoba released its reopening plan on Thursday, but many businesses, such as salons and restaurants, are disappointed with the lack of clarity and details revealed. (CTV News Photo Scott Andersson)
WINNIPEG -

Business owners in Manitoba have been eagerly awaiting the province's reopening plan and watched closely as it was unveiled Thursday.

For many, the plan was vague and disappointing.

"My business hangs in the balance of people not willing to get their first vaccines," said Christopher Graves, who owns the King's Head Pub.

"That's just not fair at all."

The province's reopening plan focuses on vaccine targets as the benchmark to reopen with Canada Day as the first goal. At least 70 per cent of Manitobans 12 and older will need to have at least one dose and 25 per cent with two doses for the first phase of the plan to be rolled out in July.

"Even if we do get to open according to their plan, we may only be at 25 per cent capacity still," said Graves. "It's very aloof. We don't know if restaurants and bars are even open in this first plan."

Another business left with questions is Sapphire Hair Lounge on Academy Road.

"We patiently watched and waited for them to name our industry, and they haven't really," said co-owner Kelly O'Leary.

The plan simply states, "Meeting vaccine targets by Canada Day means businesses, services and facilities can open at 25 per cent or greater levels," but does not go into further detail.

O'Leary is hoping salons will be included in the first phase of reopening.

"We're ready to go. We have the PPE, we have all the cleaning stuff. We just have to call our clients and get them back in the book, but we are champions at that now," said O'Leary.

Under the last major round of restrictions, fitness centres and gyms were also forced to close.

"There's so much uncertainty just trying to plan as a small business owner," said Tim Yuen, owner of 9Round Downtown Fitness.

"Every day, we're just not really sure which day we need to let our members know."

While Yuen wishes he had clarity on an opening date, he said the reopening plan is promising.

"It is encouraging that it is moving in the right direction. I don't know how fast it can be changed, like I don't know if it's the following week we increase from five to 10," said Yuen.

The province said on Thursday if vaccine targets are met early, the plan could be sped up.

The Manitoba Chambers of Commerce said the reopening plan is long overdue, and while it does provide businesses with hope, it is lacking details.

The organization is calling for more financial supports, in the meantime, to help struggling businesses.