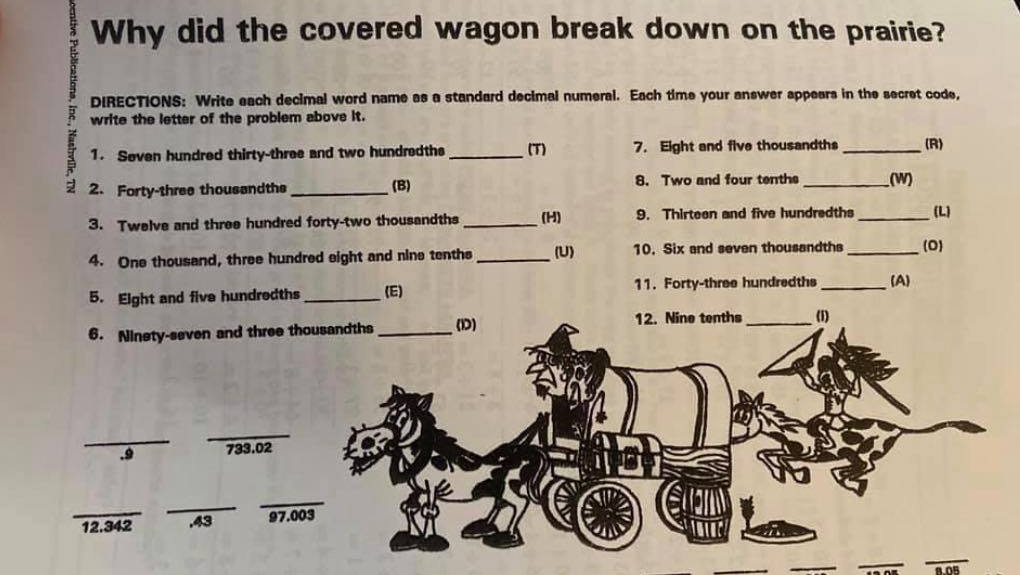 Grace Masse said one of her children was given a math worksheet (pictured) with offensive image depicting an Indigenous person on horseback who appears to be attacking two people in a horse-drawn carriage. (Submitted: Grace Masse)

WINNIPEG -- An Indigenous woman is considering filing a human rights complaint against the Brandon School Division after her child was given a piece of homework showing a racist stereotype of an Indigenous person.

Grace Masse, a mother of six, said she was very upset when one of her children pulled out a math worksheet for their Grade 5 class, and found an offensive image depicting an Indigenous person on horseback who appears to be attacking two people in a horse-drawn carriage.

"It upholds the systemic racism, it does not tell the history from the Indigenous perspective," she said. "This image really impacted me a lot. It just breaks my heart. And my kids, I'm trying to teach them how to live in both worlds, and this kind of image kind of takes two steps back on that."

The page was among the work packages sent home to students in grades five and six in the Brandon School Division who have been learning remotely.

"This triggered a lot of systemic larger perpetuated negative stereotypes that I have gone through and what I've been trying to shield with my children from," she said.

Masse, who is a Cree woman, said her family has had talks about systemic racism in Canada. She said her own mother was among the residential school survivors who was taken from her home at the age of seven.

A spokesperson from the Brandon School Division told CTV News in a written statement that one page in the Grades 5-6 learning package contained an "unacceptable image" that 208 students received.

"Unfortunately, a full review of the compiled K-6 remote learning packages was not completed prior to distribution," the spokesperson said, adding a review was not completed due to the size of task and a limited timeframe.

"However, it should be emphasized that the Division is not making any excuses and accepts full responsibility for the inclusion of the page. In addition to our deep regret, this error reinforces the need for our continued learning, commitment and action towards reconciliation and Indigenous education."

They said once the image was brought to the division's attention, it tried to remove the image and review all the homeschool packages. It said schools were asked to send parents an apology and ask that the page be removed from students' packages.

Masse said she did receive an apology from her child's teacher, but at that point her child and hundreds of others across the division had already seen the image.

She said she is concerned for when her children return to the classroom on Monday.

"Children like this, they're like sponges, they could take an image like this and let it impact their whole perception of the world around them," she said, adding she is worried about the impact this image will have on her own children.

"I hope they don't feel less proud to be Cree and to be Indigenous because of small incidences like this that should not happen."

Masse said she is considering filing a human rights complaint against the school.

"Maybe that might be a better way to help stop images like these going forward, maybe they'll take a better look at the curriculum," she said.

"I hope people that are not offended take their own research and learn about all Indigenous peoples in Canada and then they may begin to understand why this is offensive although it's just one small, little simple image – it is offensive in a larger context."