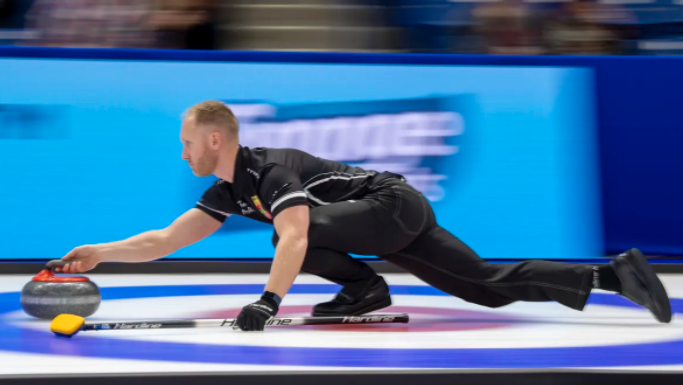 The plan is working nicely as another near-perfect performance from Brad Jacobs has the rink one win away from a berth in the Winter Games.

Jacobs used a pair of in-off double-takeouts for big scores in an 8-3 rout of Kevin Koe in the men's semifinal on Saturday afternoon. Jacobs, who will play Brad Gushue in the final, scored four in the third end and added another four-ender in the fifth.

"Brad has been fantastic and I think when you feel like your skip is going to make everything, it allows everybody to be a little more relaxed," said Kennedy. "That has kind of been the story of the week."

Later in the evening, Jennifer Jones defeated Krista McCarville 8-3 to advance to the women's final against Tracy Fleury.

"These are the moments that you play for," said Jones, who like Jacobs, won Olympic gold in 2014 in Sochi, Russia.

Koe, who represented Canada at the 2018 Pyeongchang Games but missed the podium, conceded after only six ends.

Jacobs has rolled through the competition at SaskTel Centre with the lone hiccup a 7-6 extra-end loss to Gushue earlier in the week. He was in full control against Koe after the teams opened with a pair of blanks.

"This is just the best team performance I can remember that we've put together to this point," Jacobs said. "I think we all feel very confident heading into tomorrow's final."

The women's final was set for Sunday morning and the men were scheduled to play in the evening. The winning teams will wear the Maple Leaf at the Feb. 4-20 Beijing Games.

Gushue had the same 7-1 round-robin record as Jacobs but earned the top seed thanks to his head-to-head victory.

Both teams have plenty of Olympic experience. Kennedy won Olympic gold at the 2010 Vancouver Games with Kevin Martin and returned to the Games in 2018 with Koe.

Jacobs and his front end of E.J. Harnden and Ryan Harnden won in 2014 while Gushue and third Mark Nichols were victorious at the 2006 Winter Games in Turin, Italy.

Koe managed just a single in the fourth and tacked on a deuce in the sixth with the game essentially over.

"That's the best I've seen the Brad Jacobs team in a couple years," said Koe second John Morris. "They've got that look in their eye that they're really hard to beat."

In the afternoon tiebreaker, McCarville scored a single in an extra end for a 4-3 victory over Kerri Einarson.

Einarson, who beat Casey Scheidegger 8-6 in a morning tiebreaker, had a chance to beat McCarville in the 10th end but was heavy with her draw for two.

Jones earned the first semifinal berth as the No. 2 seed. Fleury went unbeaten in round-robin play to earn the direct berth to the final.

In the semifinal, Jones scored a deuce in the eighth end and forced McCarville to try an angle-raise double in the ninth to score her deuce. McCarville couldn't clear the stones and gave up a steal of two.

"Fortunately for us we got a couple of misses that kind of turned the momentum of the game our way," Jones said.

Einarson, McCarville and Scheidegger were tied for third place in the round-robin standings at 4-4.

The men's semifinal was moved to the afternoon from the evening due to the women's tiebreaker schedule.

The change allowed both semifinals to be televised and kept the feature games on the same sheet.

This report by The Canadian Press was first published Nov. 27, 2021.

Canada is doing all it can stop people smuggling across the U.S. border after a family of four froze to death in a 'mind-blowing' tragedy, Prime Minister Justin Trudeau said on Friday.

Two years into the pandemic, what's the status of Canada's emergency stockpile of PPE?

In the early days of COVID-19, Canada's emergency stockpile of pandemic necessities had been depleted after years of mismanagement, prompting a push to procure essential personal protective equipment. Two years into the pandemic, CTVNews.ca looks at what's in our stockpile today.

A new study warns that the amount of chemical pollution on the planet has now exceeded a safe limit, threatening the 'viability' of human civilization.

A new study suggests that a plant relative of the banana found only in Ethiopia has the potential to feed more than 100 million people in warming environments if its cultivation were to be expanded.