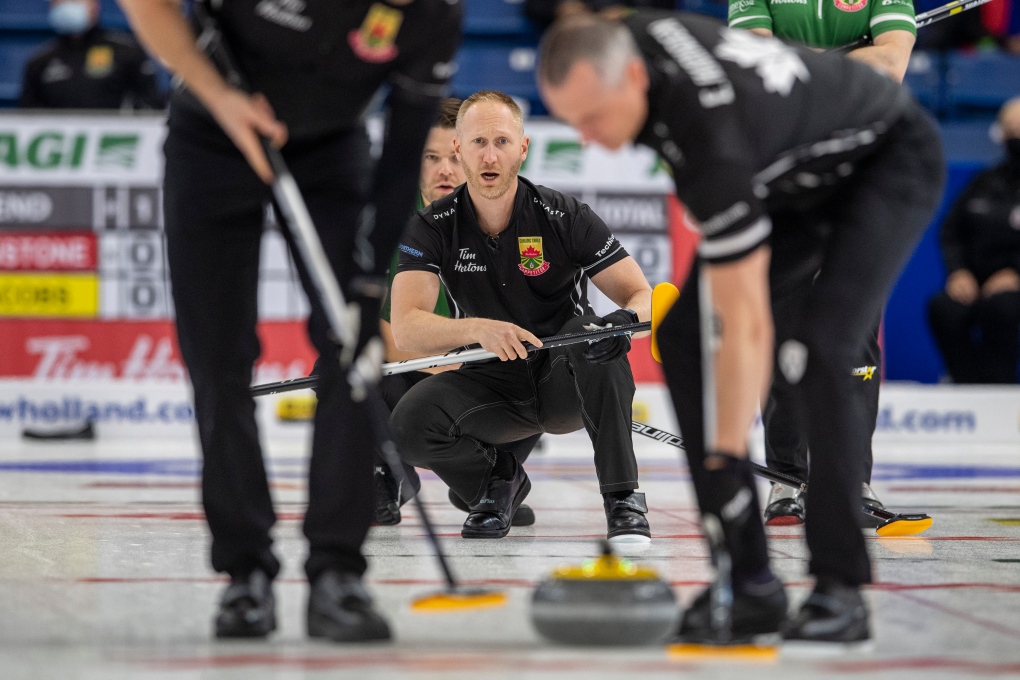 Dropping three straight games at their last event might have been just what Brad Jacobs and his team needed before playing in Canada's Olympic curling trials.

A quick exit from the recent Grand Slam competition forced the veteran rink to step up its game and preparation. The results are showing so far this week at SaskTel Centre.

Jacobs was in full control against defending champ Kevin Koe on Thursday, posting a key 8-2 victory against a fellow contender to move into sole possession of second place at 5-1.

"We're enjoying just being able to go out there and sort of strut our stuff and give it everything we've got on every single shot," Jacobs said. "That's really all that we're concerned about."

A 1-3 mark at the National in Chestermere, Alta., served as a wake-up call before the biggest domestic event of the quadrennial. Jacobs described the showing as "getting our butts handed to us."

"It was the best thing that could have happened," said third Marc Kennedy. "I think we had a season where we were playing pretty good but we were getting quite a few misses from other teams.

"In Chestermere, it was teams playing really well against us and us kind of knowing, 'OK we need to pick up our game. We need to prepare hard and we've got to realize that this is not going to come easy."'

At the trials, the powerful front end of Ryan Harnden and E.J. Harnden have set things up nicely for Kennedy and Jacobs, who have delivered for a team that appears efficient, engaged and energized.

"We've been feeding off each other really well and it has been working," Kennedy said.

Jacobs opened with three impressive victories and his team threw 94 per cent in its only loss, an extra-end defeat to Brad Gushue. Quite a turnaround after scoring just nine points over three losses at the National.

"I would say that we weren't nearly as engaged as we have to be," Jacobs said of the Slam. "We work really hard on the technical side of things and that didn't come out that week. We were fooled by the ice and by the rocks.

Jacobs has been showing the same form that led him to victory in the 2013 trials. He went on to win Olympic gold the following year.

"The intensity is rising," Jacobs said. "There's no doubt about it. There's a lot more on the line now. Every single game now is really affecting the standings and there's a lot of really good games left."

Epping (3-3) and Jason Gunnlaugson (2-4) still have a chance at weekend play. Gunnlaugson nearly scored three to force an extra end but a measure confirmed a deuce in a 7-6 loss to Brendan Bottcher.

Tracy Fleury (6-0) booked her playoff ticket with an 11-7 win over Laura Walker. She can lock up the first seed and a bye to Sunday's final with a victory over Casey Scheidegger on Thursday evening.

Jones entered the late draw in second place at 5-2 and McCarville was third at 4-3.

Kerri Einarson and Scheidegger were still in the mix at 3-3 while Walker, Homan and Harrison were clinging to faint playoff hopes at 2-4. Rocque fell to 1-5 and will not make the cut.

Tiebreakers (if needed) and semifinals will be played Saturday. The Beijing Games are set for Feb. 4-20.

This report by The Canadian Press was first published Nov. 25, 2021.