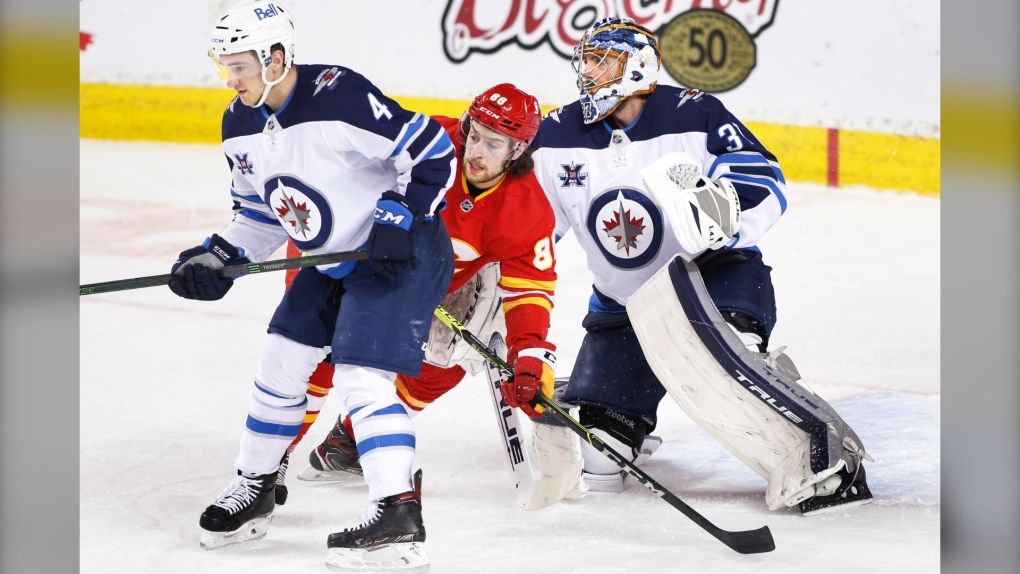 CALGARY -- The Jets hadn't tasted victory in so long, they almost forgot how to celebrate.

Winnipeg can now exhale, and focus on building off Wednesday's complete effort with an eye towards bigger moments just over the horizon.

Adam Lowry and Blake Wheeler had two goals each as the Jets defeated the Calgary Flames 4-0 to snap an ugly seven-game losing streak and clinch a playoff spot.

"It gets hard to answer the same questions," Wheeler, who now has 800 points in the NHL, said of the frustrating slide. "Clearly you don't have the answer, so it's nice not to have to answer those questions anymore.

"But I think more than that, it was a good wake-up call for our team. Our game slipped a little bit."

Connor Hellebuyck made 32 saves for his third shutout of the season and Andrew Copp added two assists for the Jets (28-21-3), whose longest losing stretch since the franchise relocated from Atlanta to Winnipeg a decade ago has seen the club go from battling for first place in the North Division three weeks ago to fighting to hang onto third.

"We were a little confused at first," Lowry said with a grin when asked about the feeling in the locker room following the final buzzer. "Facing a little adversity, it's not the worst thing. You've got to find ways to get through it.

"There's a bit of a relief there that it's behind us."

Paul Maurice picked up his 300th win as Jets head coach as Winnipeg wrapped up its season series against Calgary with a record of 6-2-1.

"When you have the stretch that we've just had, you lose sight of your starting point," he said of securing a post-season berth for the fourth year running. "We had a lot of things that we had to get right to get into the playoffs. We got off to a real good start and maintained that, and of course it's well-documented what we just went through.

"Now you can take a step back and look at the bigger picture."

Maurice added he never lost faith that his group would find its way back.

"They care about each other," he said. "You're in the room as a coach and you try to get around and gauge temperature all the time, but you don't really know the dynamic in the room until you see it under duress.

"You can tell they care about each other because they got more connected, not less."

Jacob Markstrom stopped 15 shots for Calgary (22-26-3), which was all but eliminated from playoff contention before Wednesday, and now faces an even more dire situation.

"We were coming into this game with pretty much a must-win mentality," Flames captain Mark Giordano said. "You lose 5 on 5 and special teams, you're not going to win most nights."

The Jets got a boost earlier Wednesday when the Montreal Canadiens, who sat tied with Winnipeg on points for third in the division entering play, fell 5-1 to the Ottawa Senators in the nation's capital to halt their three-game winning streak.

The Jets and Canadiens both have four games left on the schedule.

Winnipeg was just three points back of Toronto for top spot in the North after picking up a 5-2 road victory over the Maple Leafs on April 15. But coming into Wednesday, the Jets were 15 points back of the Leafs, had conceded 28 goals against during their losing streak, and had found the back of the opposition net just 10 times.

Desperate for something positive out of the gate, Winnipeg jumped in front of Calgary just 69 seconds into the first period. Playing his second game back since missing four straight with a head injury, the grinding Lowry moved in on a 3-on-1 and fired the first shot of the night past Markstrom his ninth goal of the season.

Hellebuyck then had to be sharp in a tight-checking first, picking Elias Lindholm's effort out of the air with his glove.

Lowry made it 2-0 at 5:33 of the second with the Jets killing a penalty on a nice breakaway move to the backhand through Markstrom five-hole for his fourth-career shorthanded goal.

"If you draw up a perfect game, this is pretty dang close," Hellebuyck said after recording the 23rd shutout of his career. "Every single guy chipped in.

"There's a lot of character."

The Jets goaltender stopped Matthew Tkachuk's shot up high with Calgary still on the power play before the Flames winger rang another attempt off the crossbar.

The home side thought they had scored late in the second to cut the deficit in half, but Winnipeg defenceman Neal Pionk cleared the loose puck out of Hellebuyck's crease following a desperation save. The puck bounced over the stick of Calgary's Juuso Valimaki at the offensive blue line, and Wheeler raced in alone before fooling Markstrom with a backhand upstairs for his 12th of the campaign.

Winnipeg's captain then put the game out of reach with his milestone moment on a power play at 3:02 of the third for the Jets' first four-goal showing since their last win.

"It doesn't mean anything," Wheeler, 34, said of his 800th point. "This night belongs to our team and the fact that we're going back to the playoffs. That's all I play for, especially this part of my career is just having opportunities to achieve the ultimate goal.

"That's what makes this night special."

This report by The Canadian Press was first published May 5, 2021.