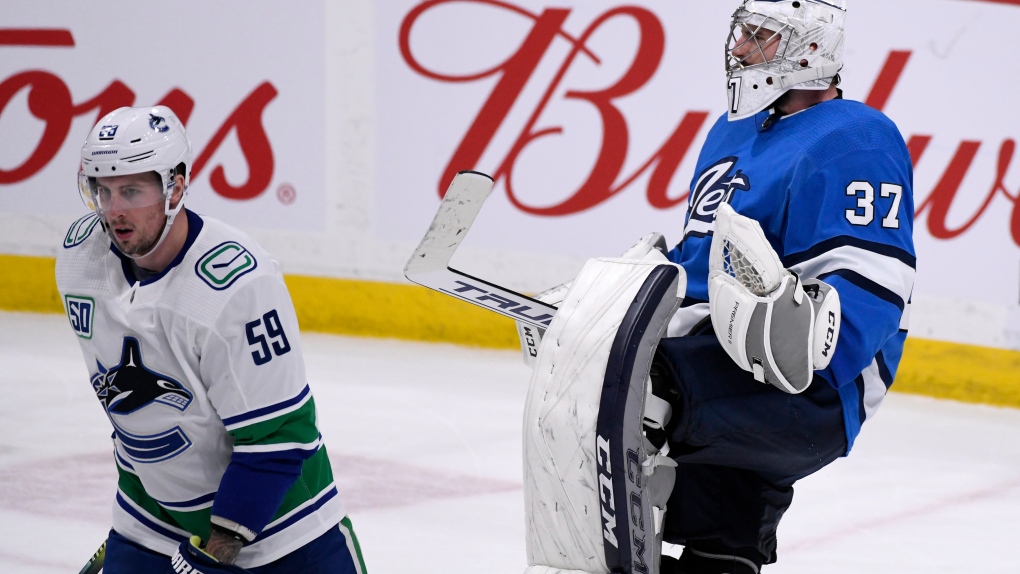 WINNIPEG -- Far from the typical bright lights of Vegas where the NHL Awards would have been hosted, Connor Hellebuyck didn’t seem to mind accepting his Vezina Memorial Trophy award from the comfort of his own home, by way of a virtual NHL Awards show from Edmonton.

“My girlfriend, Andrea, cooked me, my dad and my mom a big steak dinner and then we watched on the TV,” Hellebuyck described his award celebration. “It was just one of those moments that I couldn’t believe that it actually happened.”

However, the award hardly comes as a surprise.

Hellebuyck is the main reason the Winnipeg Jets made it to the Eastern Conference Qualifying Round when the NHL returned from a four-month pause due to COVID-19.

He finished the season with the most shutouts (6), shots faced (1,796) and saves (1,656) topping the Vezina Trophy ballot with 19 first-place votes; nine ahead of runner-up Tukka Rask of the Boston Bruins, and 18 ahead of the third finalist, Andrei Vasilevskiy of the Tampa Bay Lightning.

A finalist himself just two seasons ago, Hellebuyck called Monday’s win a “sigh of relief” admitting it was a feat he desperately wanted to achieve. It also served as a reflection of how he’s matured as an elite goaltender.

“I’ve tightened up a lot of things and I think the biggest and most important part is my mind,” Hellebuyck said.

Hellebuyck is the first Jets goalie to win the award, but the feat is far more historic than that.

It’s the first individual award received by a player since the team moved to Winnipeg in 2011, and just the third award won by a player dating back to the Thrasher days in Atlanta.

The last Winnipeg player to bring home an individual award was the last captain of the Jets ‘1.0’, Kris King, who won the King Clancy Memorial Trophy in the team’s final season.

While he sits atop the proverbial mountain among NHL goalies, Hellebuyck says he will use the offseason to further study his game to see where he could have “saved a few more pucks” and work towards making his game even more complete, as he takes aim at his next milestone.

“I’m looking forward to the next one, and the next one is going to be glorious and that’s winning a (Stanley) Cup.”