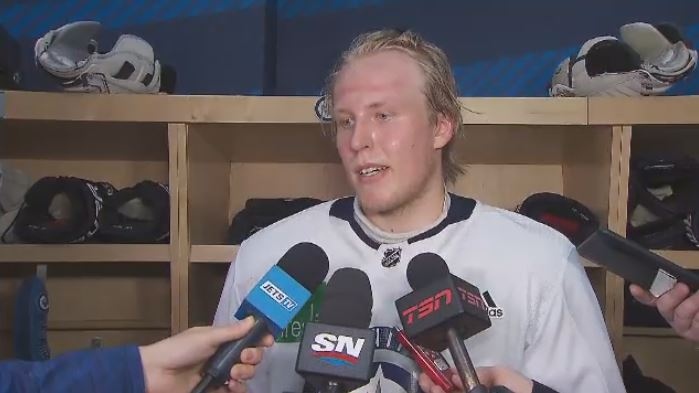 Patrik Laine tossed sports drinks to his teammates in the locker room and received plenty of barbs in return.

Laine led the Winnipeg Jets with 44 goals last season, but on this day in practice he was on the losing end of a breakaway competition and became the water boy.

"I don't want to waste my goals on a breakaway game," Laine said as he chirped back.

With 30 goals and 50 points in 79 games, Laine hasn't had a bad year offensively even amid long stretches of low production. He has had goal droughts of five, six, 12 and 15 games. But at 20 years old in his third NHL season, the Finnish winger has rounded out his game beyond being a sublime scorer and evolved into the kind of player who could contribute to another long playoff run for Winnipeg.

"I believe Patty is going to be a power forward," coach Paul Maurice said. "He's going to become a very powerful man down low. For sure, what happens is you get these guys come in with this extreme talent and you kind of expect it to bleed into all parts of the game, they should be able to do everything well. Well nobody does at 18, 19 and 20. It takes time for them to build their game."

The second pick in the 2016 draft behind Toronto's Auston Matthews, Laine scored 80 goals in his first two seasons in North America on smaller ice than he was used to, and it looked like it came so easy.

When it suddenly didn't, Laine learned quickly he had to work to compensate in other aspects of the game.

"There's always going to be times when you're not scoring, but still that's not the full game," he said. "There's still 17 minutes you need to play pretty much without the puck. There's obviously those small things that we need to do well as a team that everybody in this locker room appreciates. So you've just got to do those things when you're not scoring and you've got to do that all the times."

That is music to a coach's ears. Maurice understands the comparisons between Laine and a young Alex Ovechkin. He also knows even the most offensively gifted players struggle early in their careers to figure out how to do other things. Maurice can see progress from Laine just by how hard he works on the ice.

"It's because Patty's played way harder 5-on-5," Maurice said. "No amateur player comes in usually with an offensive bent and has any idea of how hard you have to play to play against the other team's best. They spend some time and then they go, 'OK, the top two lines on every team are completely different in some ways than the bottom two lines, the set of D I've got to play against.' It takes them a while to learn the pace they have to play at."

It also takes time to grow physically and mentally. General manager Kevin Chevelayoff understands the talent Laine brought to the NHL as a teenager and also the idea that improvement doesn't happen overnight.

"He's filling out from a hockey standpoint, but he's also getting stronger," Cheveldayoff said. "He's still not as physically mature as some of the older players. As that rounds out, I just think his game is really going to define itself even more."

The definition in Laine's game and the work ethic, teammates say, comes from captain Blake Wheeler and alternate captain Mark Scheifele. Winnipeg's two All-Stars don't have the same raw talent or the wicked shot of Laine, but their examples have rubbed off on him.

"Both great leaders, have tremendous work ethic, understand the game very well," veteran forward Matt Hendricks said. "Patty really wants to be an all-around great hockey player. He's always talking to them about where he could be or what he could do differently to help the team game as well as help them produce offensively."

Part of Laine's on-the-job lesson has been appreciating the challenge of facing top defenders each game. Being the focal point of a defensive game plan is nothing new, but seeing that affect his numbers at the NHL level spurred Laine to figure out how to contribute when the puck's not going in the net.

"It's always tough, but then you start thinking about all of the other things more and what can I do better and how can I get more chances and still play good defence," Laine said. "Playing good defence is going to win you championships. I know that. You can win a lot of games by good offence, but in the long run, you're going to win more with good defence."