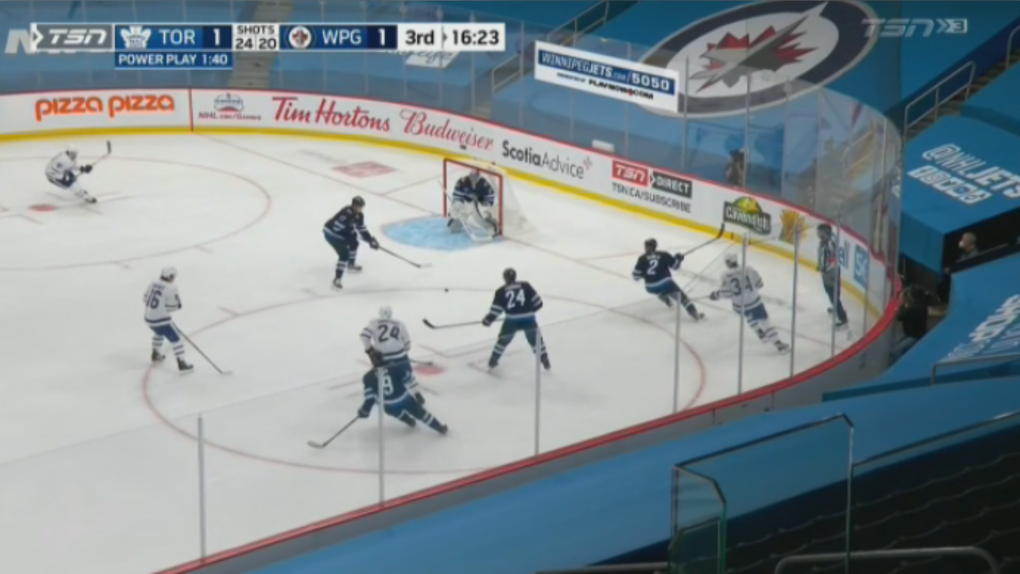 WINNIPEG -- Jason Spezza scored the only goal of the shootout to give the Toronto Maple Leafs a 2-1 victory over the Winnipeg Jets on Friday night at Bell MTS Place.

The veteran forward corralled a rolling puck before deking Connor Hellebuyck and tucking it in the small gap between the goaltender's outstretched pad and the post.

Kyle Connor, Pierre-Luc Dubois and Mark Scheifele were unable to beat Toronto goaltender Jack Campbell in the shootout. Campbell improved to 8-0-0 on the season.

Auston Matthews missed his shootout chance for the North Division-leading Maple Leafs, who improved to 24-10-3. The Jets, now five points behind Toronto in the standings, fell to 22-14-2.

Toronto had several great chances to put the game away on an overtime power play, but couldn't beat Hellebuyck, who played in his 300th career regular-season game.

Travis Dermott scored in regulation time for the Maple Leafs. Andrew Copp had the lone goal for the Jets.

Zach Hyman showed some early zip for Toronto in a quiet first period. He sped around the net on his first shift and beat Hellebuyck only to watch the puck roll out just wide of the post.

Campbell was steady at the other end in an opening stanza that had just a few decent scoring chances.

Dermott snapped a puck from the point that seemed to catch Hellebuyck off guard at 5:16 of the second period. The rather innocuous one-timer knuckled its way inside the post for his second goal of the season.

Toronto's Alex Kerfoot hit the post late in the second period and teammate Alex Galchenyuk found the iron early in the third.

The Jets pressed midway in the final period, forcing Campbell to make a pair of diving saves.

The Toronto netminder appeared to favour his leg after making a great stop on Connor, but shook it off and stayed in the game.

The Maple Leafs' power-play woes continued as they went 0-for-3 on the night. Toronto has just one goal in its last 28 opportunities with the man advantage.

Wheeler had three shots over 15 minutes of ice time. He left Wednesday's game against the Maple Leafs -- a 3-1 Toronto win -- with an undisclosed injury.

Earlier in the day, the Jets said that defenceman Nathan Beaulieu will miss the rest of the season after undergoing surgery to repair a torn labrum.

The NHL announced Friday that a Jets home game against the Ottawa Senators scheduled for May 7 will be played Monday night. The change is a result of recently postponed games affecting the Jets and Vancouver Canucks.

The Maple Leafs will continue their road trip on Sunday against the Calgary Flames.

This report by The Canadian Press was first published April 2, 2021.