Mark Scheifele's voice caught in his throat Friday as he talked about the hate directed toward his loved ones this week in the aftermath of a controversial hockey play.

The Winnipeg Jets star said he's willing to accept punishment for a crushing blow that injured Montreal Canadiens forward Jake Evans in Game 1 of the North Division final on Wednesday, but called what's happened to his family unacceptable.

"The bullying that they've gotten, online, phone calls. It's pretty gross to see," a visibly emotional Scheifele said on a video call. "My parents are the salt of the earth. For my parents to get hate like that, and my brother and sister, it's awful.

"I can handle it, I'm a grown man. I've accepted that and I can be held accountable for that. But for my family to get that, it hurts me a lot."

The NHL's Department of Player Safety handed Scheifele a four-game suspension for the heavy hit that left Evans sprawled on the ice in the final minute of Montreal's 5-3 win.

Scheifele called the sanction "excessive," but said he won't appeal the decision.

"I don't want to be a distraction any more. This has lingered on long enough," he said before the Jets hosted the Canadiens in Game 2 on Friday.

Jets coach Paul Maurice said he was expecting Scheifele to be suspended for two games.

"I think four is excessive," he said. "The Department of Player Safety has every right, and they're needed in their role, to set precedent for hits, especially when there's an injury involved. So they have that right. I don't agree with it, but it's set now and that's where the National Hockey League game goes going forward. And we'll learn from it and move on."

Scheifele's hit came as Evans wrapped a shot into the empty Winnipeg net with 57 seconds left on the game clock. The six-foot-three, 207-pound Scheifele levelled Evans at the goal line and the Canadiens forward flew through the air, striking his head on the ice. He lay still for several moments while trainers and medical staff came to his aid, and was eventually taken away on a stretcher. 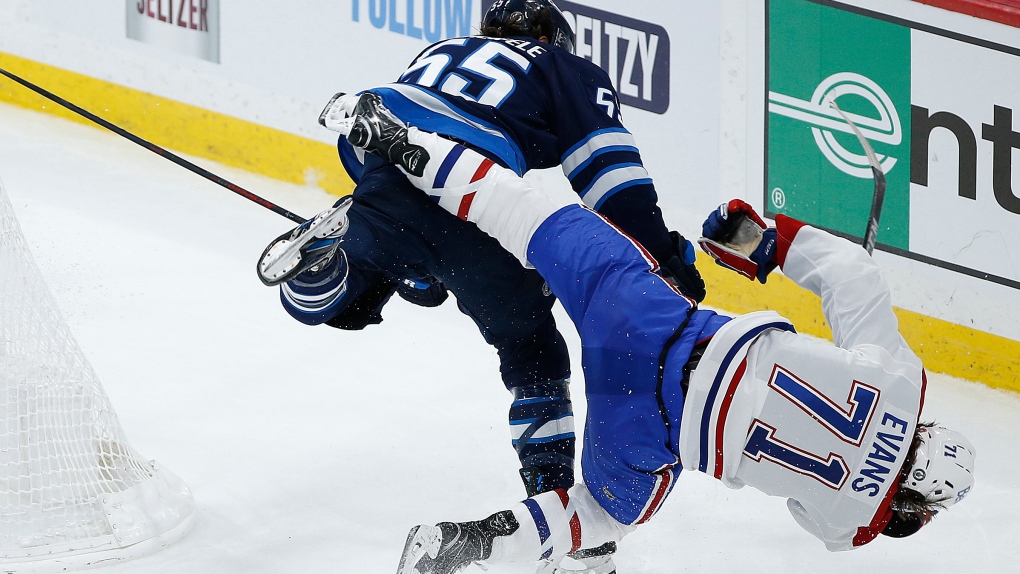 Scheifele was handed a charging major and a game misconduct for the play.

On Friday, he described the hit as the result of trying to stop Evans from scoring.

"My intention on that play is to try to negate a goal. There's no intent, there's no malice there. I don't go in with a frame of mind of injuring a hockey player," Scheifele said. "Obviously the result sucks that he's hurt. But ΓÇª I just hope he's OK. I hope for a speedy recovery and I'm praying for him."

Evans was not hospitalized but Montreal's interim coach Dominique Ducharme has said he has a concussion.

Ducharme said Friday that Evans is feeling "a little bit better" and the Canadiens were focused on preparing for their next game.

Losing Scheifele creates a big hole in the Jets' lineup. The 28-year-old from Kitchener, Ont., was Winnipeg's leading scorer in the regular season with 63 points (21 goals, 42 assists) and has five more (two goals, three assists) in five playoff appearances this year.

Maurice said it was "unfortunate" that the team was losing arguably its best forward for four "critical" playoff games.

Winnipeg could get another key piece back for Game 2, however.

Veteran centre Paul Stastny was on the ice for an optional pre-game skate on Friday after missing Wednesday's game with an undisclosed injury. Maurice said whether he'll play is a game-time decision.

A number of different players on Winnipeg's roster have the ability to step up and fill holes, Scheifele said.

"We have tremendous character, we have tremendous everything on this team," he said. "It's a pretty special team and I have full faith in my team that I will be able to play a game again this year."

This report by The Canadian Press was first published June 4, 2021.