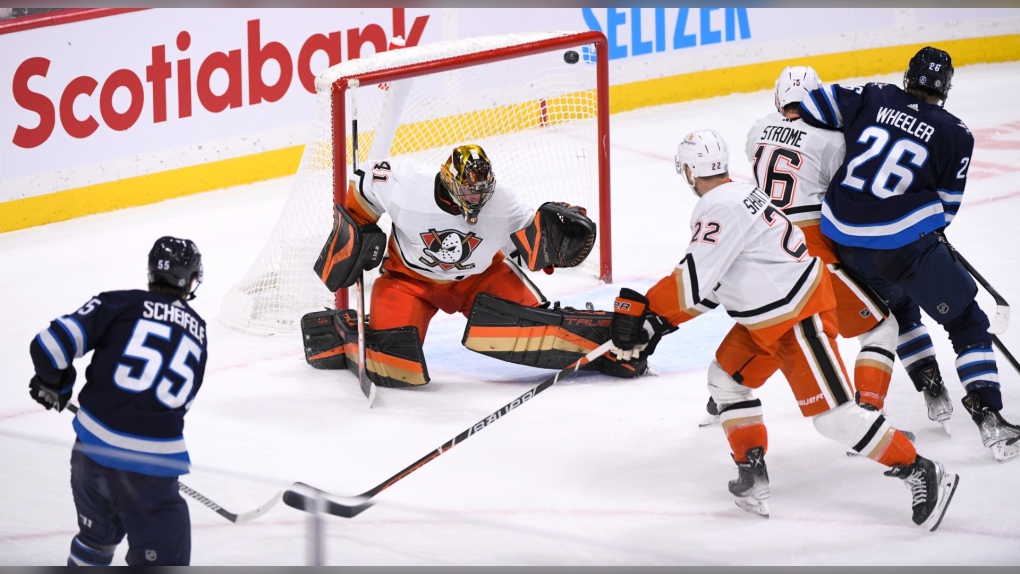 WINNIPEG — Rick Bowness may have liked the final score, but the coach wasn't happy with the way the Winnipeg Jets started their 5-2 comeback victory over the Anaheim Ducks on Sunday.

“It's just not right to start a game like that,” said Bowness, whose team was outshot 18-7 in the first period and was down 2-0 early in the second.

“Listen, I'm the head coach so I'm responsible for the way we start and getting our team prepared. So that starts with me. The second thing is, I'm not a babysitter. These guys are men. They're professionals and they're paid to show up here and go to work. My job here is to make that happen.

The game was tied 2-2 when Morgan Barron scored at 13:23 of the third period and Mark Scheifele quickly followed up with his team-leading 13th goal of the season at 15:12.

Saku Maenalanen and Nate Schmidt each had a goal and assist for the Jets (15-7-1). Dylan Samberg recorded his first NHL goal and Kyle Connor and Adam Lowry both added a pair of assists.

Connor Hellebuyck made 28 saves for Winnipeg, which is 2-1-0 in a four-game homestand that wraps up Tuesday against the Florida Panthers.

Barron said the players absorbed Bowness's words in the dressing room after the first period.

“There wasn't enough intention. It wasn't intense enough from us,” Barron said. “We weren't playing with enough passion in that first period. We all knew it on the bench, on the ice, and I'm sure you guys could tell from the press box that was the case. We need to have better starts.”

Jakob Silfverberg and Brett Leason scored for the Ducks (6-17-3), who sit at the bottom of the NHL standings and saw their winless streak stretch to six games (0-4-2).

“We had a really good first period and we let them get back in the second, and the third period was anyone's game and they jumped on the chance,” Leason said. “We just gotta find a way to get good starts and finish games."

Anthony Stolarz stopped 35 shots for Anaheim, which was coming off a 5-4 shootout loss to Minnesota on Saturday.

The game was tied 2-2 after goals by Maenalanen and Samberg in the second period.

“I thought our guys did a hell of a job throughout the game, leading early and hanging on,” Anaheim coach Dallas Eakins said.

“The winning goal just comes off of a guy. Our (defenceman) got his feet tangled up with another guy and he falls. If he doesn't fall, we're probably right now in overtime or a shootout.”

The Ducks had a pair of power plays in the first period and made the second one count.

Hellebuyck stopped a shot by Frank Vatrano but the rebound bounced out to Silfverberg, who slapped the puck into the net at 15:16.

The Ducks went up 2-0 after a Samberg giveaway near centre ice turned into a breakaway for Leason, who converted the chance at 5:09 of the second.

The Jets responded with some pressure and were rewarded.

After Scheifele rang a shot off the post, Schmidt sent a puck from behind the net out front to Maenalanen and he put it behind Stolarz at 10:31.

Samberg redeemed himself for his earlier miscue when he tied the score 2-2 with a point shot through traffic at 13:28. Anaheim put in an unsuccessful coach's challenge for a high stick.

Samberg said the puck hopped over this stick on the turnover.

“I made a turnover there at the blue line that cost us the second goal but to be able to score, kind of helpful to bringing the team back in,” Samberg said. “A little weight off my shoulders.”

Schmidt finished the scoring with a power-play goal at 19:15 of the third.