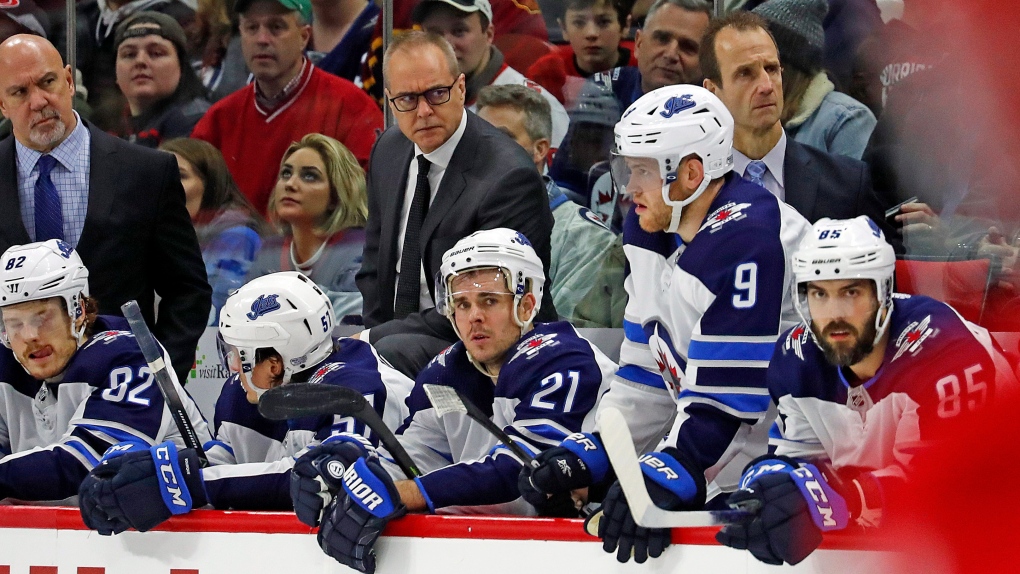 Winnipeg Jets head coach Paul Maurice, center, watches from the bench during the third period of an NHL hockey game against the Carolina Hurricanes in Raleigh, N.C., Tuesday, Jan. 21, 2020. (AP Photo/Karl B DeBlaker)

WINNIPEG -- For the second time this regular season, the Winnipeg Jets have lost three consecutive games. They've given up a total of 16 goals over that span, while scoring just four.

And with just under three minutes remaining in their latest defeat, 4-1 to the Carolina Hurricanes on Tuesday night, Mark Scheifele had had enough, earning his first fighting major of the season by squaring off with Hurricanes' defender Brett Pesce.

"You're feeling your record in your last six right now," said head coach Paul Maurice of his team's frustrations, after losing for the fifth time in their last six outings.

The Jets had been outscored 6-2 in the first period over their previous four games, and that trend continued on Tuesday night. Martin Necas opened the scoring 2:28 into the game, and Justin Williams made it 2-0 at the 5:30 mark.

Patrik Laine answered with his 17th goal of the season only 56 seconds later, but Teuvo Teravainen restored his team's two-goal lead before the period was over.

Maurice wasn't buying talk of a slow start to the game.

"I haven't liked some of our games that we've played, that team played as hard as they could."

The Jets finish their three-game roadtrip Wednesday night against the Columbus Blue Jackets, and will have eight days off between games because of the NHL All-Star Game.