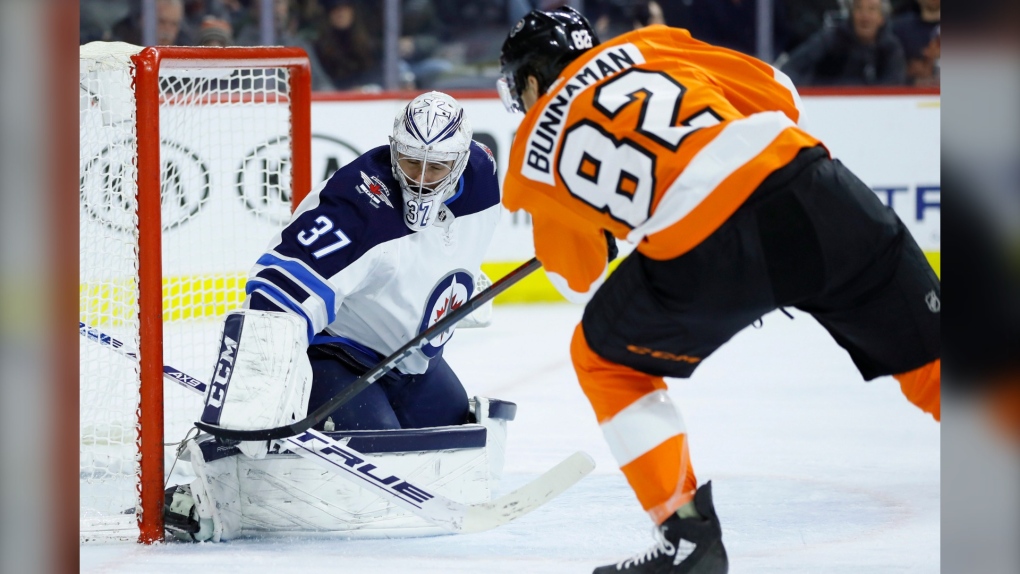 PHILADELPHIA -- Scott Laughton scored two goals Saturday to lead the streaking Philadelphia Flyers to an 4-2 victory over the Winnipeg Jets.

Sean Couturier and Tyler Pitlick also scored and Justin Braun had three assists for the Flyers, who won their third straight and fourth in the last five to improve to 21-5-4 at home. Philadelphia entered the day third in the Metropolitan Division and five points behind first-place Boston and Pittsburgh.

Laughton had a chance for a hat trick, but he shot just wide of an empty net with about 30 seconds left after the Jets pulled their goalie for an extra attacker.

Josh Morrissey and Patrik Laine scored for Winnipeg. The Jets had won three in a row while outscoring opponents 14-6 during their season-best winning streak. Winnipeg entered the game clinging to a playoff spot in the Western Conference as the first wild-card team, but the Jets were just one point ahead of ninth-place Arizona.

After Laine's power-play score three minutes into the third pulled the Jets within a goal, Pitlick gave Philadelphia some breathing room by redirecting Robert Hagg's slap shot to make it 4-2.

Couturier scored his 19th of the season with 5:10 remaining in the second to put Philadelphia on top 3-0. After Matt Niskanen fired a slap shot from the point, Couturier gathered the loose puck after a scramble in front and sent it over Connor Hellebuyck's glove side.

Morrissey struck for Winnipeg with 1:56 remaining in the second when he took Mark Scheifele's pass from behind the net and shot over Carter Hart's left shoulder.

Laughton netted the first of his two first-period goals 2:06 into the game when he took a nifty pass from Ivan Provorov and whistled a wrister from between the circles past Hellebuyck's glove side.

And he put Philadelphia ahead 2-0 with 10:57 left in the first when his shot from the left circle went under Hellebuyck's left pad.

Hart made 27 saves to improve his record in Philadelphia to 16-2-2.

The Jets are in Buffalo Sunday against the Sabres.