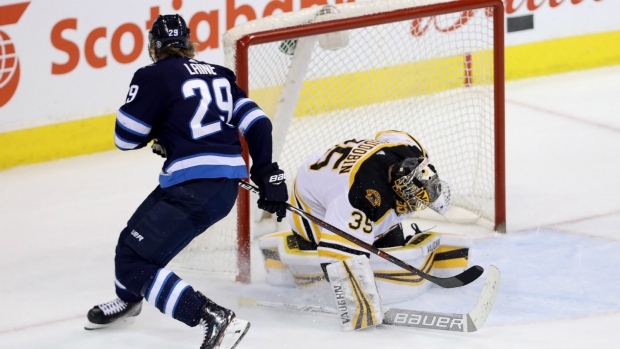 WINNIPEG -- Patrik Laine said back in May there was a good chance he'd look "terrible" if the NHL resumed its season this summer.

Like most players locked down during the COVID-19 pandemic, the always-blunt Winnipeg Jets sniper hadn't been on skates in more than two months. He also scoffed at the idea of strapping on rollerblades.

With training camps now in full swing eight weeks later, and the league's restart fast-approaching, that feeling of not being ready hasn't really changed.

"Still kind of far away," Laine said Wednesday when asked about the current state of his game. "It's kind of hard to see myself playing playoff hockey in two weeks.

"But just trying to make the most out of it and trying to be as well-prepared as I and as we can ... just try to work hard these next couple of weeks so we'll be ready when the puck drops."

Those games are coming quick for the 24 teams involved in the resumption of play, including the Jets, who are set to meet the Calgary Flames in the only all-Canadian matchup of the best-of-five qualifying round beginning Aug. 1 in the Edmonton hub for spot in the traditional post-season bracket.

In truth, the entire league is scrambling to get back up to speed. Certain players had access to home gyms and ice sooner than others. It's simply a reality of the times.

And all things considered, Winnipeg head coach Paul Maurice said Laine, who eventually got skating back home in Finland, isn't as far away as the winger made it sound.

"Kind of looks exactly like everybody else," Maurice said. "I don't think anybody looks the way they're going to in about two weeks. We all expect that. It's part of building."

Building is also what Laine did with his own game this season before the NHL was shuttered in mid-March by the novel coronavirus.

Coming off a disappointing 50-point campaign in 2018-19 -- he'd scored 80 goals and added 54 assists in his first two seasons after being picked second overall behind Auston Matthews at the 2016 draft -- Laine focused on becoming a more complete player.

"You always want to get better at everything you're doing, but I think just try to add some consistency," said the 22-year-old. "The difference between a bad night and a good night -- that gap -- just try to get that a little bit smaller and try to get the better overall game in better shape."

Laine missed training camp back in September while working on a two-year, US$13.5-million contract extension, but shot out of the starting blocks after rejoining the team, having put up 28 goals and 63 points in 68 games when the season was suspended.

"Development and growth," Maurice said of what Laine showed from October through March compared to his three previous campaigns. "It's hard to explain when you get a young man that has such success in something specific like scoring goals. But in so many ways, he wouldn't be any different than any other 18-year-old, especially coming from Europe. (The NHL is) a different style of hockey.

"It's a far different level of the game. It happens so much faster."

Maurice said Laine's biggest jump came at 5-on-5 and understanding the need to work as part of a unit.

"There's a big chunk of the game of hockey where nothing actually happens unless you don't do your job," said the coach. "He's gotten to be quite a bit better at just doing the job, plays without the puck more.

"If he's the first guy on the forecheck, he needs to do something so the four players can move. Most skilled players or uniquely-skilled players that you get into the NHL, they've never really had an awareness of that -- that what they do changes what everybody else around them does."

Laine made waves during his contract impasse when he told a Finnish reporter he deserved to play with the Jets' best players, namely Mark Scheifele and Blake Wheeler.

"I think I've been able to show everybody that I'm capable of playing top minutes and against top players," Laine said Wednesday. "Hopefully I'm going to get more responsibilities in the future."

Maurice, meanwhile, made it clear at no time did he have a problem with Laine's comments.

"The great players have to have that belief in themselves that they deserve to be on the ice all the time."

That belief is surely still there for Laine, even though it might be a little shaky at the moment.

This report by The Canadian Press was first published July 15, 2020.