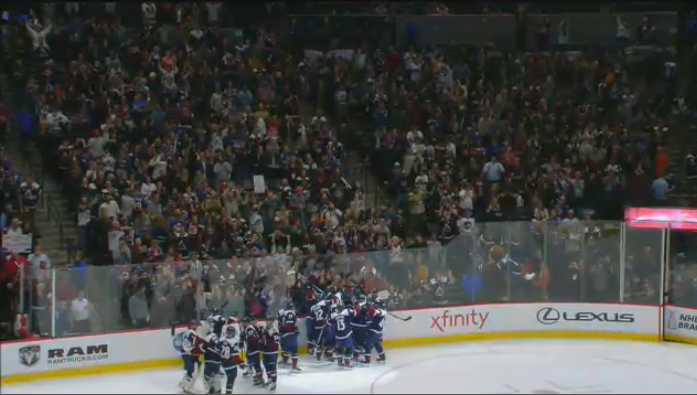 The Winnipeg Jets lost to the Colorado Avalanche 3-2 in overtime Thursday.

DENVER -- The Colorado Avalanche started the celebration on the bench as the clock ran out in regulation. It secured the point they needed to earn a post-season spot.

The party that spilled onto the ice moments later? That was just a pleasant bonus.

Erik Johnson scored 1:49 into overtime, Philipp Grubauer made 34 saves and the Avalanche clinched a playoff berth by rallying from a two-goal deficit to beat the Winnipeg Jets 3-2 on Thursday night.

Johnson took a feed from Nathan MacKinnon and knocked it past Connor Hellebuyck for the winner.

"To send our crowd into a frenzy felt good," Johnson said. "Anytime you score a goal in overtime, it's fun."

The Avalanche went 8-0-2 down the stretch to secure a wild-card position for a second straight season. They trail Dallas by a point for the first wild card in the Western Conference. The Stars still have two games remaining.

"To kick down the front door and get in the playoffs and finish the way we finished is an exceptional job by our leaders, by all the guys stepping up," Avalanche coach Jared Bednar said. "I love the character and push and determination and will-to-win from our group."

Winnipeg's loss was a big blow in its quest to capture the Central Division crown. The Jets fell a point behind Nashville and dropped into a tie with St. Louis with one game remaining. Winnipeg has gone 1-4-1 over its last six games.

Mark Scheifele and Nikolaj Ehlers scored first-period goals for the Jets, while Hellebuyck made 35 saves.

"We really took a step from our last couple games and we fought for our game," Ehlers said. "We got some of our identity back and that's what we need to keep working on now."

Tyson Barrie scored in the second period and Carl Soderberg tied it up with 9:25 remaining.

But things were tense down the stretch. Colorado was called for too many skaters on the ice with 1:26 left. The Jets couldn't get anything past Grubauer, setting the stage for Johnson's big goal.

After the game, the Avalanche gave away jerseys as part of fan appreciation night. The bigger prize, of course, was this: Earning a playoff spot in back-to-back seasons for the first time since making 11 straight appearances from 1994-95 to '05-06.

"It's a good feeling, but a lot of work left to be done," Johnson said. "Man, we made it so tough on ourselves; too many men with (1:26) left. You should have heard the groans on the bench. We were like, 'You have got to be kidding me.'

"It was loud in there, it sure was fun. I can't wait to play in front of those fans in the playoffs."

Scheifele got the Jets on the board first as he poked the puck into the net just before Blake Wheeler tumbled over the back of Grubauer. The Avalanche challenged the play for goaltender interference, but the officials upheld the call.

Ehlers extended the lead to 2-0 toward the end of the first by knocking in the puck as he fell to his knees. It was his 20th goal of the season.

"We did all the right things throughout the game, which we were looking for," Scheifele said. "Obviously we wanted the win, but you have to take positives out of it."