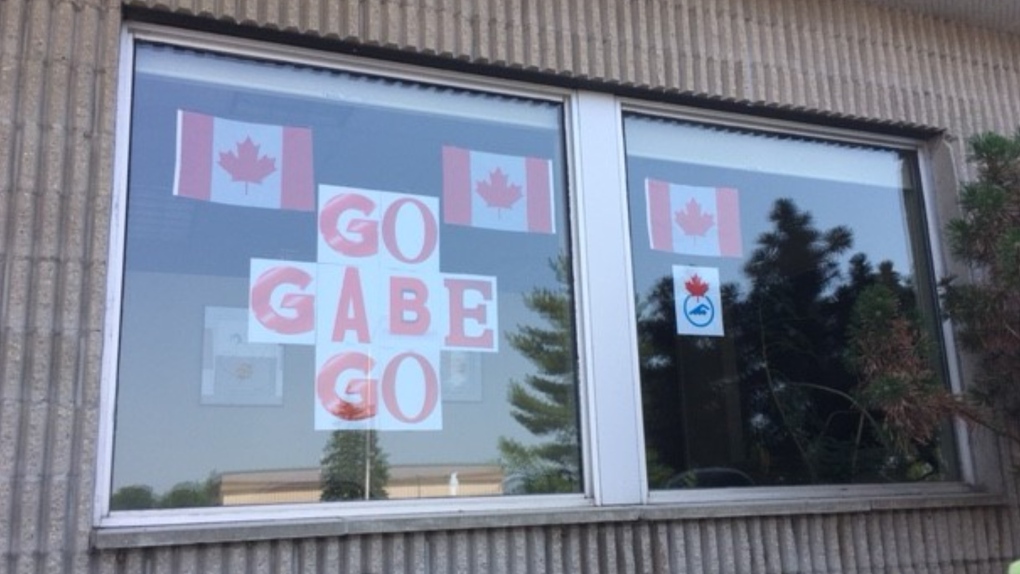 Signs of support and encouragement for the 19-year-old Gabe Mastromatteo have been popping up around his home town of Kenora, Ont., as he competes at the 2020 Tokyo Olympics. (Source: Susan Tymofichuk/ CTV News Winnipeg)
WINNIPEG -

As Gabe Mastromatteo continues with his Olympic swimming debut, he will have his whole hometown cheering him on.

Signs of support and encouragement for the 19-year-old swimmer have been popping up around Kenora, Ont., where Mastromatteo grew up.

Steve Mastromatteo, the Olympian's father, said the gesture blew him away.

"Everyone we meet in the stores and stuff, or driving by businesses the signs that are up, it's overwhelming because of how much it means to everyone else too, and we take a lot of pride in that."

Andrea Ronnebeck, whose stepsister is Mastromatteo's mother and coach, is the one behind the signs. She's been rallying the community to cheer Mastromatteo on.

"I thought, well, instead of 'painting the town red,' how about we 'Paint the town Gabe,'" Ronnebeck told CTV News.

"Kenora has always been a close-knit community, and when there's a special event, people just get involved and provide support wherever they can."

Ronnebeck said up and down Main Street, businesses and residents have been getting in on the action – posting signs in the windows and on their lawns in support of Mastromatteo.

Ronnebeck said Mastromatteo is the third athlete out of Kenora to compete at the Olympics.

Mike Smith competed in the decathlon in 1988, 1992 and 1996 Olympics. Mike Richards joined Canada on the ice as they won gold for hockey in the Vancouver 2010 Olympics.

"I think it's wonderful that people that come from a small town like Kenora have the potential to achieve the things like what Gabe and Mike Richards etcetera have achieved," Ronnebeck said.

While this is the 19-year-old's first time competing at the Olympics, Ronnebeck said she doesn't think it will be his last.

Canada has now fully vaccinated 79.13 per cent of the country's eligible population.

As Canadians are waking up to more of the same after Justin Trudeau managed to hold on to power following Monday's election, international media reacted to the prime minister's 'gamble.'