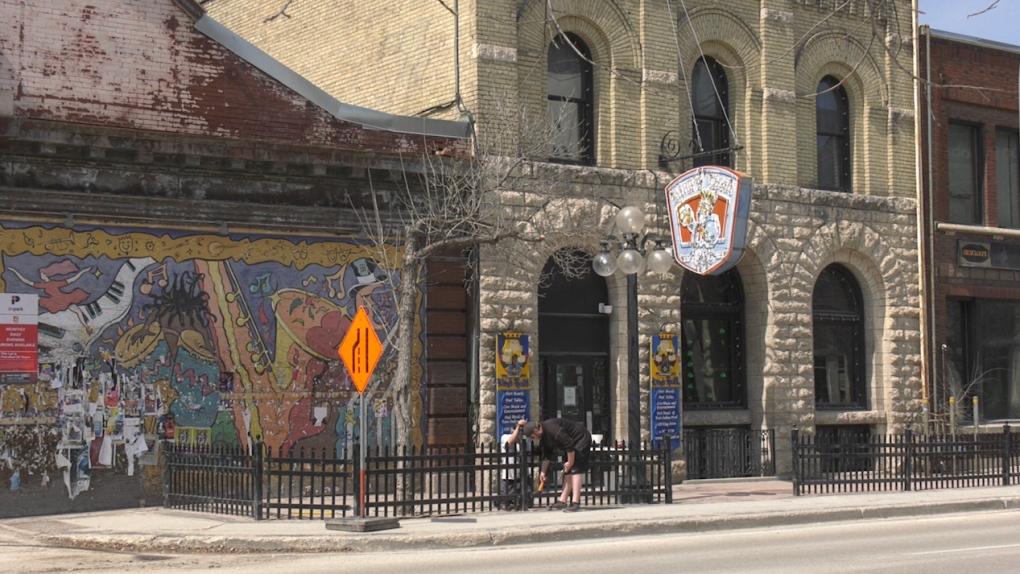 Outside the King’s Head Pub, workers installed fencing to prepare the business for phase one of the province’s strategy.(Source: Josh Crabb/ CTV News Winnipeg)

WINNIPEG -- A beloved Exchange District pub is at the heart of a fundraiser started by its customers.

The King’s Head Pub, like many businesses during the pandemic, has struggled as public health orders have reduced operating days and capacities.

To help,fundraiser organizers Kim Wheeler and Natalie Ballentyne asked pub patrons to donate what their average tab would be.

“It had been closed off and on since March of 2020, and then with reduced capacity we just knew they were in trouble,” said Wheeler.

For Wheeler the pub is a special place. Staff attended her wedding, and her daughter got her first job there. She said it’s the welcoming and inclusive atmosphere that draws regulars and different social groups together.

“There are people there I know that would never be friends with me or I would never be in their circles, but you walk through those doors everybody’s family,” Wheeler said.

After speaking to pub staff and owner Chris Graves, all of whom were expressing concern, she thought it was time to help.

So back in May, Wheeler and a friend set up a Go Fund Me page with an original goal of raising $10,000. Three weeks and $12,000 later donations had started to dwindle, with Wheeler thinking it was time to stop the fundraiser.

She didn’t. News of a potential pub closure may have spurred a new round of donations, with Sunday’s Go Fund Me total spiking to $45,000.

Despite exceeding the fundraising goal Wheeler said the Go Fund Me will continue if people want to keep donating.