Kyle Connor, Jets beat Canucks for the ninth time in a row 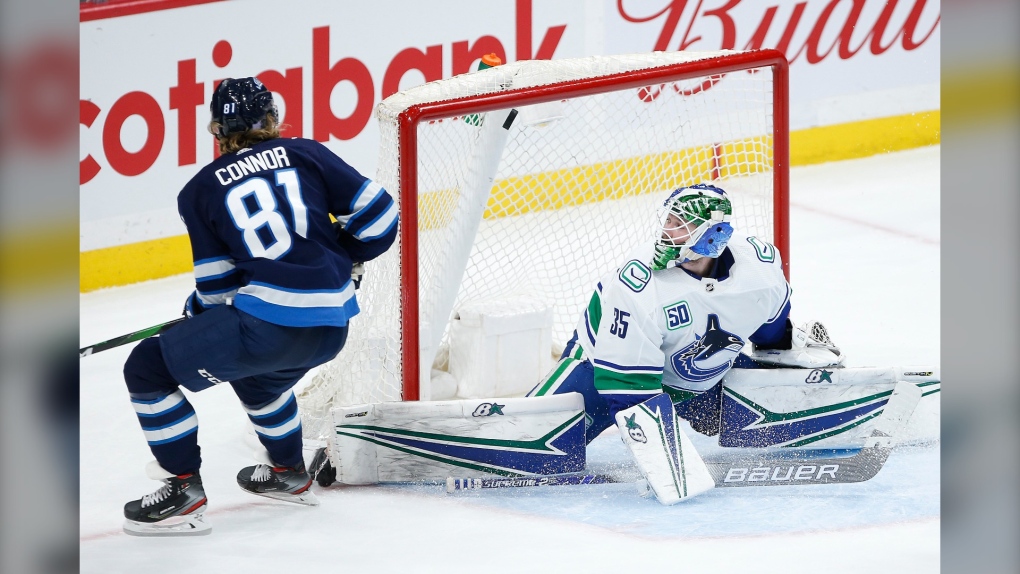 WINNIPEG -- Speed was the name of the game for the Winnipeg Jets on Friday.

Kyle Connor and his teammates cited quick feet as a key reason the Jets handed the Vancouver Canucks their third straight loss with a 4-1 victory.

"I think that's when we're at our best," said Connor, who had a goal and an assist. "The hands follow, you start to think the game at a higher pace and you see plays more often, too."

Jack Roslovic, Mark Scheifele and Adam Lowry, with an empty-net goal, also scored for the Jets (9-7-1), who have points in their last four games (3-0-1).

Connor Hellebuyck made 32 saves for Winnipeg, which has won nine consecutive games against the Canucks.

"I thought we had a spark, good jump," Hellebuyck said. "We were working together as a team, there was no one man trying to do it all himself."

J.T. Miller scored his team-leading eighth goal of the season for the Canucks (9-5-3), who've gone 0-2-1 in their past three outings. Miller has two goals and a pair of assists in a four-game point streak.

Thatcher Demko stopped 31 shots for Vancouver, which was coming off a 5-2 road loss to Chicago the previous night.

"I liked our game a lot more than I did (against Chicago)," Canucks coach Travis Green said. "I liked our first period a lot. We get the lead. It was a good hockey game.

"Their power play, give them credit, they got a lot of momentum off that power play."

After a scoreless first period, the Jets had a pair of power plays 16 seconds apart in the middle frame. They capitalized on the second one when Roslovic flipped in his own rebound at 11:54 to tie it 1-1.

Scheifele broke the tie exactly five minutes later with a rebound off a Connor shot.

With the Jets ahead 2-1 in the third period, Hellebuyck made a glove grab on a close-in shot by Bo Horvat.

Nine seconds later, Connor stole the puck from Vancouver defenceman Tyler Myers and went in alone and shot a high shot past Demko at 13:35."I would like to have that one back, for sure," Horvat said. "He made a heck of a save on me."

Myers had a game of highs and lows.

Early in the first period, Jets forward Nikolaj Ehlers was tripped up by the stick of Myers, who signed as a free agent July 1 after five seasons in Winnipeg.

Ehlers slid into the boards and was down for a couple minutes, but skated slowly to the bench and quickly returned to the game.

Later in the period, Myers was recognized by the arena announcer for his time with the Jets and received cheers from the crowd at Bell MTS Place.

He was also glad Ehlers was fine. As for Connor stealing the puck from him, that wasn't a good memory.

"We were trying to set up a play on the faceoff. Not really sure what I was doing down there," Myers said with a wry chuckle, noting Connor's speed to get to him.

Canucks defenceman Chris Tanev, who left the Chicago game late in the first period with an upper-body injury, took a hard shot to his right leg from Laine earlier in the period. He limped to the dressing room, but returned after getting the medical green light.

"It's hockey, everyone does it," he said of going back in the game. "It just hit me in a good spot and leg went numb."

Jets forward Andrew Copp helped Lowry get his first goal, and first point, of the season. Facing an empty net, Copp passed back to Lowry instead of scoring himself with 1:45 left in the third.

Winnipeg made changes to its top two lines because of veteran centre Bryan Little's injury in Tuesday's loss to New Jersey. The puck from a one-timer shot by teammate Ehlers hit Little near his left ear, perforating his eardrum.

Jets right-winger Blake Wheeler was moved to play centre on the second line between Ehlers and Roslovic. Scheifele was in the middle of Connor and Patrik Laine.

This report by The Canadian Press was first published Nov. 8, 2019.