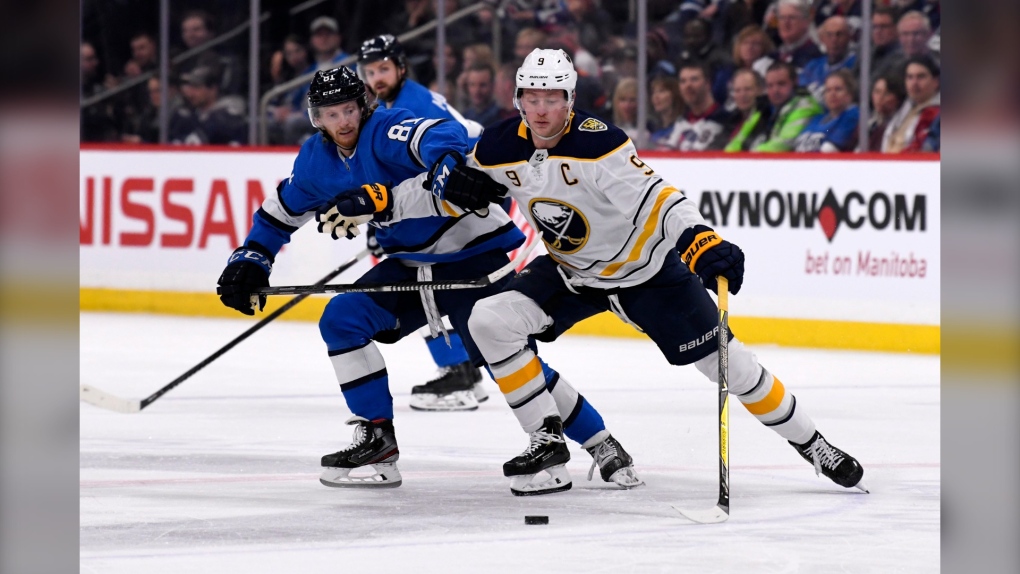 WINNIPEG -- Kyle Connor has now established himself as one of the top snipers in the NHL.

The Jets forward scored twice and added an assist to lead the Winnipeg Jets to a 3-1 victory over the Buffalo Sabres on Tuesday night at Bell MTS Place.

Connor scored on the power play and at even strength, and he set up a short-handed goal. He reached a career-high 35 regular-season goals with the power-play marker and is now among the top-10 goal scorers in the league.

"The kid's scored 30 in the league every year so far," said Jets captain Blake Wheeler, who chipped in two assists. "I don't know how much blossoming he needs. We talked about it the other day and he had something like 70-something points and I don't know how many goals in college hockey. Those are freak-show numbers. I played college hockey and it's not easy to go out there and get two points a game, almost, in that league.

"I think, offensively, you saw that Kyle was a really gifted player around the net. What's transformed him into one of the more elite players in the league is his compete in and out of every shift. There aren't any lulls in Kyle's game anymore."

"To compete, I think that's been the foundation for me as a player throughout my entire career and growing up," Connor said. "I've always stressed that wherever I've played. I think it's just more of a consistency factor where I realized it's a grind the NHL game. It's an 82-game season, plus playoffs. The best players bring it every single night and that's what makes good players great."

Connor has now scored in four consecutive games and has seemed rejuvenated since being reunited with Wheeler and Mark Scheifele.

"We've been playing on and off for the past couple of years here and we know where we're going to be in certain spots," Connor said. "That's where the chemistry comes. I think, bottom line, is we're just trying to out-work (opponents)."

Connor Hellebuyck made 25 saves for Winnipeg (34-28-6) while Carter Hutton stopped 33 shots for Buffalo (29-29-6), which finished its current road trip winless.

"Tough road trip, real tough," said Sabres defenceman Jake McCabe, who claimed the puck hopped over his stick on Winnipeg's first goal. "I liked our start -- at least for the first few shifts. Bad break there and we couldn't quite recover.

"It is quite unfathomable to be standing here after an 0-4 road trip like this, especially after how good we were playing going into it. We've just got to grab on to those small details and just keep working every single night and just keep growing this structure that (coach Ralph Krueger) has created for us here."

Krueger credited his players for not giving up after going down 3-0 in the second period.

"I know we don't have quit in this group," he said.

It was the first of a three-game homestand for the Jets, who have now won four consecutive games in their own arena and are 18-4-3 at home.

Ristolainen had pulled Buffalo to within 3-1 midway through the second when he took a bad-angle shot that went in off Hellebuyck's left skate.

With Ristolainen off for tripping, Connor had a power-play goal early in the second period to give Winnipeg a 3-0 lead. Left alone in front of Hutton, he converted a Patrik Laine rebound.

The Jets had taken a 2-0 lead into the second period when Poolman tipped a perfect pass from Connor past Hutton while shorthanded.

Connor had opened the scoring at 13:59 of the first period. He converted a perfect pass from Wheeler on a 2-on-1 rush.

Winnipeg will next play host to the Vegas Golden Knights on Friday.