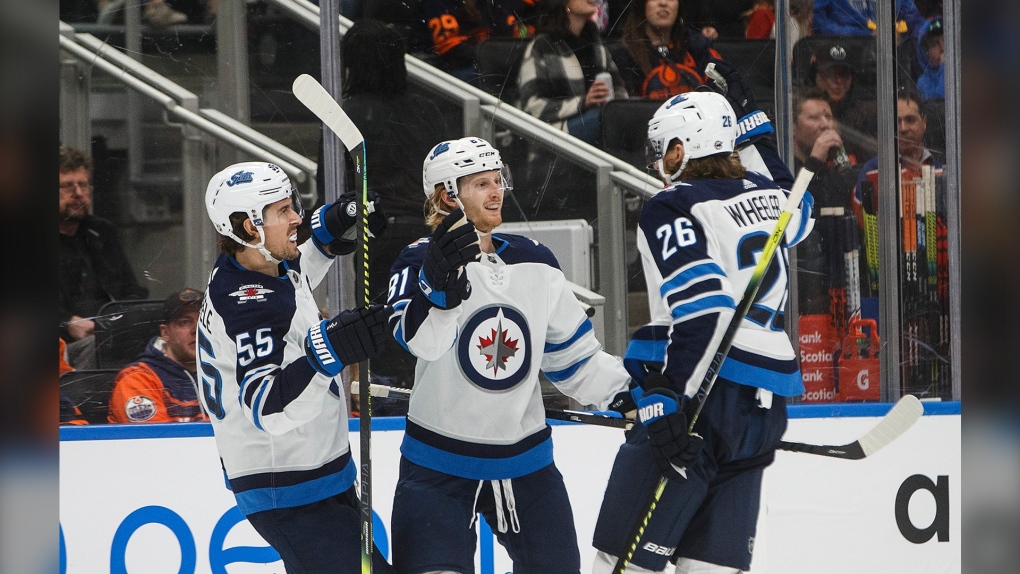 EDMONTON -- Kyle Connor had a pair of third-period goals as the Winnipeg Jets beat the Edmonton Oilers 4-2 on Wednesday.

Blake Wheeler and Patrik Laine also scored for the Jets (37-28-6), who have won four in a row to move into a wild-card spot in the Western Conference.

Tyler Ennis and Connor McDavid scored for the Oilers (37-24-9), who have lost two straight.

There was no scoring in the first period, with Oilers goalie Mike Smith making 11 saves, while Connor Hellebuyck stopped nine in the Winnipeg net.

The Oilers broke the deadlock nine seconds into the second when Hellebuyck bobbled the puck behind the net and Kailer Yamamoto directed it in front to Ennis, who was able to nudge it into a wide-open net for his 16th of the season.

Winnipeg tied the game midway through the first as a Wheeler pass was inadvertently swatted into the net by Oilers forward James Neal as he tried to break up the play, going down as Wheeler's 22nd.

A few minutes later, Jets defenceman Neal Pionk saved a sure goal, swatting a puck out of mid-air to safety just before it could cross the goal-line.

It was Smith's turn to cough up a puck behind the net with three-and-a-half minutes to play in the middle frame, as Eakin was able to send it in front to Laine for his 28th.

Edmonton knotted the game back up with 1:37 left in the second as McDavid, who returned from missing the last game with an illness, made a terrific deke in tight to record his 34th goal.

Winnipeg made it 3-2 just 29 seconds into the third as Connor was sent in alone and made no mistake in scoring his 37th goal and 200th career NHL point.

After a frantic final couple minutes with Smith on the bench and the Oilers all over the Jets net, Connor put the game away with an empty-netter.

The Oilers were scheduled to close out a four-game homestand against the New York Islanders on Friday, while the Jets are expected to be in Calgary against the Flames on Saturday.

This report by The Canadian Press was first published March 11, 2020.