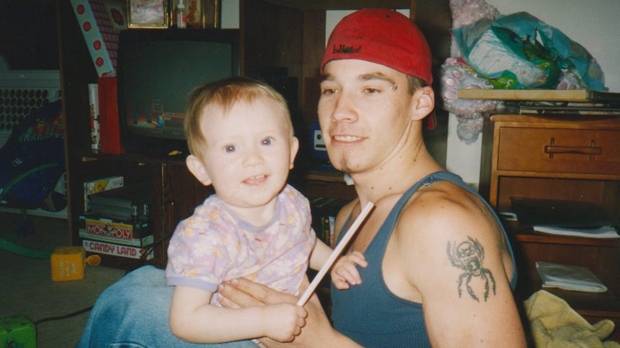 Tim McLean is seen in an undated handout photo with the daughter of his friend William Caron. (File Image: THE CANADIAN PRESS/HO - William Caron)

WINNIPEG -- The Canadian government and the RCMP have been quietly dropped from lawsuits filed after the beheading of a young man aboard a Greyhound bus in Manitoba.

Victim Tim McLean's father filed a claim soon after his son was killed in the summer of 2008 against Greyhound, perpetrator Vince Li and Canada. The Canadian Press recently discovered that the file was amended in April 2012 to drop the federal government as a defendant and to add 22-year-old McLean's "infant son" as one of 15 people who have "been deprived of Tim McLean Jr.'s guidance, care and companionship."

Lawsuits filed by two separate bus passengers, Debra Tucker and Kayli Shaw, have also been amended to drop the RCMP.

Lawyer Jay Prober, who represents Tim McLean Sr., said the  government was dropped from his client's lawsuit because there were concerns it wouldn't stand up in court.

"We were concerned that it wasn't a strong enough case," Prober said.

The lawsuit against Greyhound and Li is proceeding, but has been delayed because the lawyer representing the bus company has just been appointed a federal judge, Prober said.

Li has been confined to a psychiatric institution north of Winnipeg since he was found not criminally responsible for stabbing, mutilating and beheading McLean on a bus heading to Winnipeg in July 2008. Li, a schizophrenic, sat next to the 22-year-old McLean after the young man smiled at him and asked how he was doing.

Li said he heard the voice of God telling him to kill the young carnival worker or "die immediately." Li repeatedly stabbed McLean who unsuccessfully fought for his life.

The bus pulled over near Portage la Prairie, Man., and Li continued stabbing and mutilating McLean's body. Passengers fled the bus and stood outside. Li eventually escaped through a window and was arrested.

The original statement of claim filed by McLean's father alleged the government of Canada was liable because it is responsible for national transportation security. It also argued that the government knew or should have known about previous violence on board Greyhound buses and failed to put safeguards in place.

The lawsuits filed by passengers Tucker and Shaw in 2011 have not only dropped the RCMP, but have crossed out a section that alleged Canada "failed to ensure the safety of passengers on board buses travelling between provinces" and "failed to assure that Canada's transportation system meets the highest practicable safety and security standards."

None of the allegations has been proven in court. The federal government never filed a statement of defence.

Denise Reaume, professor of law at the University of Toronto, said it's not unusual for defendants to be dropped as a lawsuit moves through the courts.

"Generally speaking, the way plaintiffs usually start off is with a cause of action to include everybody except Santa Claus in the possible defendants," she said. "You sweep with a broad brush to begin with."

Suing the federal government or the RCMP in a case like this is particularly difficult, Reaume said, because the plaintiff would have to prove the defendants knew they were being negligent and could have foreseen such a gruesome act would occur as a result.

"Even if you could make an argument that they actually should have been able to foresee this kind of thing, there is a very good chance that a court would say it's not really our job ... to tell Parliament what laws to pass."

The passenger lawsuits allege Tucker and Shaw can't sleep or work and suffer from anxiety and depression after witnessing the attack on McLean.

Their virtually identical statements of claim still allege that Canada "failed to take any measures, through its servants the RCMP, to remove the defendant Mr. Li from the bus in a timely manner, thereby allowing him to decapitate the deceased and mutilate and defile the body ... and thus adding to the ongoing horror and emotional distress of the plaintiff."

All the lawsuits still allege Greyhound and Li are responsible for damages. All statements of claim allege Greyhound failed to ensure the safety and security of passengers, knowing they could be "at risk and in imminent danger at any given moment," and didn't provide adequate training to its employees.

"The defendant Greyhound owed a duty of care to the deceased Tim McLean Jr. to ensure that he was travelling in a safe, secure environment free from harm, bodily injury or death; and, specifically, free from the presence and threat of weapons or sharp instruments capable of inflicting bodily injury or death," says the amended statement of claim in the McLean family lawsuit.

"The defendant Greyhound knew or ought to have known that it was necessary to implement systems in their bus operations to provide for passenger security and safety."

Greyhound has filed a similar statement of defence in all three lawsuits. It says the company "took such care as, in all circumstances of the case, was reasonable to see that its passengers were reasonably safe" and it "complied with all applicable security regulations and laws."

Any injury caused to McLean, or any passengers who witnessed his graphic killing, was "as a result of the sudden and unforeseeable actions of the defendant Li," Greyhound also says in its defence.

"It has provided its employees with security training designed to ensure that its passengers would be as safe as reasonably possible aboard its vehicles."