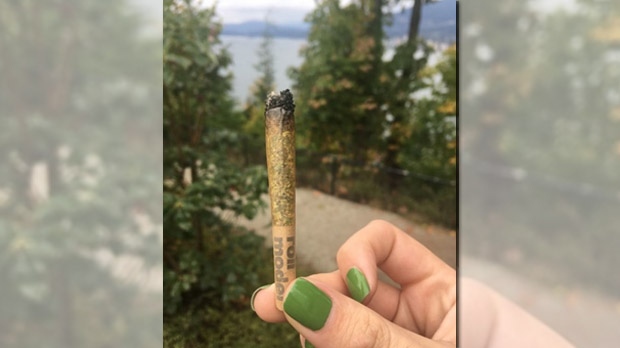 When the Edmonton social media influencer posted about it a few days before legalization, she thought everything was in the clear. The contest promised a set of regular teacups painted with gold cannabis leaves -- no big deal, right?

Instagram pulled the post down saying it violated their community guidelines. Chiles says she can only assume it's because the cups are painted with cannabis images. But she's not sure because Instagram never got back to her.

"It's so frustrating," said Chiles, who runs the account @hiiighvibes on the platform.

"This is a teacup, this isn't even a cannabis accessory. What's the difference if it has a rose or a leaf printed on it?"

What angers Chiles most is that Instagram doesn't seem interested in providing clarity around cannabis legalization in Canada or explaining why they disapprove of some posts.

Instagram has strict rules around cannabis portrayal that are intended to prohibit the facilitation of smoking weed. While you can post about weed-related content and advocate for marijuana, promoting the sale of the drug is against the rules, it says.

"Because of the borderless nature of our community, we try to enforce our policies as consistently as possible," said Instagram representative Alex Kucharski in email.

But Instagram's official stance on what's allowed on the platform isn't always reflected in how they enforce the guidelines -- at least that's how Jodie Emery feels after Instagram temporarily deactivated her business account earlier this year.

Emery operates an Instagram profile for Jodie's Joint, a Toronto coffee shop she owns that's also a hub for cannabis and hemp advocacy.

Confused over how she broke the rules, Emery appealed the closure and asked the company to clarify.

She says the Jodie's Joint account was reactivated about a week later without Instagram giving her a clear answer to what happened.

"It's very difficult for a lot of entrepreneurs and advocates who depend on social media for outreach... when they lose those accounts," she says.

Emery hoped the federal government would clarify acceptable practices in the weeks leading up to legalization, but she says they've done little to help people understand how a section of the Cannabis Act applies to social media influencers.

"I call it a bong show," she says of how Ottawa is handling the situation.

Applying the Cannabis Act to internet culture only creates more confusion for Instagrammers, some of them say.

Under federal law, the promotion of cannabis and its related accessories -- or any service tied to cannabis -- is prohibited unless steps are taken to prevent young people under 18 from viewing the activity.

However, it's nearly impossible for Instagrammers to know if their posts are being viewed by underage users on one of the most popular apps for teenagers.

Equally problematic is the prohibition of testimonials and endorsements. The Cannabis Act states that weed and any associated brands cannot be presented in a way that "evokes a positive or negative emotion" which includes presenting a lifestyle of "glamour, recreation, excitement, vitality, risk or daring."

So where does that leave Instagrammers who build their entire personas on portraying a glamorous life of recreation and excitement?

When legal weed was introduced last week, the Victoria-based social media influencer wasted little time before lighting up for her 17,000 followers on the @Savvystonedgirl account.

She posted about rubbing elbows with iconic stoner Tommy Chong at a corporate event, filmed herself taking a hit from a tiny pipe shaped like a saxophone, and vouched for a new "smooth" strain of cannabis she enjoyed.

She says if any of those posts crossed the line between commentary and endorsement she might not know it. That's one of the reasons she launched a group chat with about 15 of her closest "Canadian stoner" friends in hopes of stoking conversations about what's acceptable on social media.

She figures if Instagram and the federal government can't draft clear standards for influencers, maybe the stoners can forge a pathway for themselves.

"None of us want to get in trouble for doing this, but we still want to advocate for the normality of cannabis," Jackson says.

"So we've been having an intense conversation for about a week now... to try and comply a little bit more."

Some influencers added "Adult Content 19+" to their profile descriptions to show they're making an effort to deter minors. A few went a step further by adding disclaimers to each cannabis post warning about the effects of smoking marijuana, Jackson says.

It's an effort she hopes will keep Instagram and the federal government off their backs.

"Most of us think it's more of a fear-mongering thing."

Recently she received a notification from the platform telling her an image she posted of concentrates a few months ago violated their guidelines.

"That's kind of got me nervous because I've never had a post reported before," she says.

Rose, who has over 9,000 followers on her @cbddarling account, says she hopes clearer guidelines are provided to Instagrammers soon.

"I just got into it because I really wanted to share my story," the Otterville, Ont., resident says of using the platform.

"I'm more of a strain nerd the way that somebody geeks out about video games."

She hopes when the confusion over social media calms down there will be a role for influencer will play as educators of cannabis products.

"I want to look at it, smell it, touch it and tell people about it," she says.