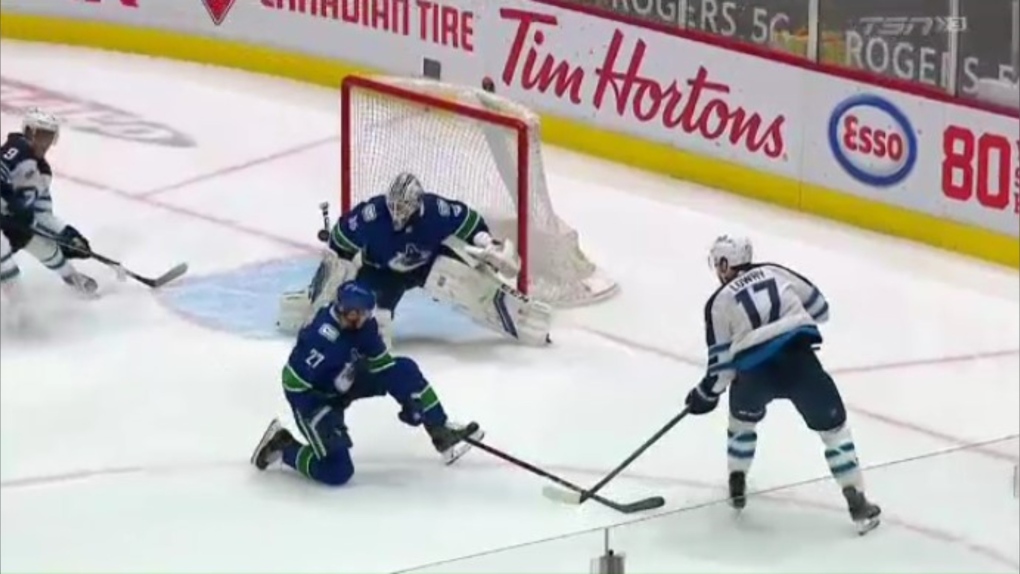 The Winnipeg Jets beat the Vancouver Canucks 4-0 on March 22.

"It means you've finally perfected a game," he said after the Jets topped the Vancouver Canucks 4-0.

"I'm never going to say my game is perfect, but for one game, with the guys in front of me, we played a perfect game," he said. "Granted, there's some luck in there and maybe you can find some mistakes, but at the end of the day, we're looking back at this like we played our A-plus game. And this is what we want to try and continue moving forward with."

Hellebuyck, last year's winner of the Vezina trophy as the NHL's top goaltender, stopped all 22 shots he faced Monday.

It marked his 21st career shutout. The last came on March 6, 2020 when the Jets downed the Vegas Golden Knights 4-0.

Hellebuyck's toughest test on Monday came midway through the second frame as Zack MacEwen was sprung from the penalty box after serving time for a holding call.

The big Canucks forward picked up the puck in the neutral zone and darted into Winnipeg territory, waited out a diving Neal Pionk in tight and got a solid shot off, only to see Hellebuyck make the stop.

It was an important win for Winnipeg (19-11-2), which came into Vancouver on a bit of a skid, having dropped a pair of decisions in Edmonton -- the Jets' first back-to-back losses in regulation this season.

The squad had been playing well but simply hadn't earned the results they wanted, Hellebuyck said.

"We've got a lot of character in that locker room," he said. "We needed this one to show that we are playing the right way and to not stray away from it. Everyone was playing their hearts out tonight and it really showed."

The games in Edmonton were tough on Hellebuyck because he gave up goals on a lower volume of shots than he's used to, said Jets coach Paul Maurice.

"It's like a goal scorer -- that confidence is critical," he said. "A zero on the board for a goaltender, you get to carry that with you for a little while. And he earned it."

Maurice felt at morning skate Monday that his team had the right mood and mindframe to collect a win.

"They had a really good understanding of the weight of the game after losing two, that we wanted to be right," he said.

Winnipeg refused to relent after Blake Wheeler opened the scoring midway through the first period on Monday.

The Jets captain picked the puck off Canucks defenceman Alex Edler and streaked down the ice on a 2-on-1 breakaway with Paul Stastny.

Vancouver's Nate Schmidt dropped to the ice in front of the crease in an attempt to stop a pass but Wheeler kept the puck and slipped a shot through the legs of Canucks goalie Thatcher Demko.

Adam Lowry added a pair of goals in the third and Stastny closed out the game, scoring with three minutes left on the clock.

"I thought it was tight-checking game," the goalie said. "Going into the third down one, I felt we we're in a pretty good spot to make a push and tie it up and not a lot anyone could do on a couple of those plays."

Vancouver was without a key piece for much of the third. Captain Bo Horvat hobbled to the dressing room in pain after taking a slap shoot to the foot midway through the period and did not return to the game.

Seeing the Canucks centre in obvious distress, Lowry and Andrew Copp reached out their sticks from the Jets bench and gave Horvat a push up the ice.

"You see a guy go down and he's struggling to get to the bench and you hope that someone would do that for you if you were in that position," Lowry said of the move.

"He's such a good player for them, an honest player and plays hard. You see a guy go down like that and you kind of just want to get him off the ice. You know how painful it is."

Canucks coach Travis Green did not have an update on Horvat's condition post-game, but the injury could be difficult to weather for an already-depleted forward corps.

Vancouver's three other starting centres (Elias Pettersson, Brandon Sutter and Jay Beagle) were all out with various undisclosed ailments on Monday.

The team simply needs guys to "step up to the plate," said J.T. Miller, who has shifted from wing to centre in Pettersson's absence.

"This is the hard part of the season. We just need to literally challenge ourselves to be the best version of ourselves right now," he said. "The guys that are gonna fill in these roles are going to get more ice time and we have to play very desperate hockey right now."

The Jets and Canucks will meet again in Vancouver on Wednesday.

This report by The Canadian Press was first published March 22, 2021.