Man at centre of Manitoba naked judge case was a sex performer: lawyer 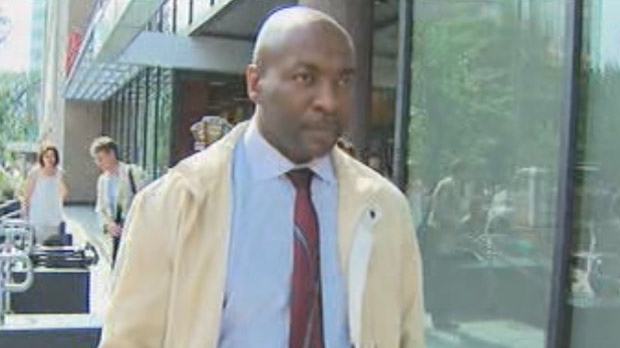 Alex Chapman is shown in a file image in Winnipeg.

WINNIPEG -- A man who complained about being shocked and traumatized by nude Internet photos of a Manitoba judge was no stranger to cyber sex and was willing to perform sex online for money, the judge's lawyer alleges.

Alex Chapman, whose sexual harassment complaint sparked an inquiry that could cost Justice Lori Douglas her job, has his own online sex history, claims an affidavit filed by Sarah Whitmore. The document was filed in Federal Court as part of an application to quash a Canadian Judicial Council inquiry into Douglas's actions.

Whitmore says in her affidavit that evidence, which has not been heard at the inquiry, "showed Chapman had signed up to be an online sex performer: He would perform sex acts in front of a video camera on the Internet in front of strangers who paid to watch."

There is also evidence that Chapman had pornographic images on his computer and had engaged in group sex with "three or four women at a time," Whitmore said.

Chapman's sexual past calls into question his credibility, Whitmore said, because he claimed to have been traumatized by seeing sexually explicit photos of Douglas and by being asked by her husband to have sex with her.

"All of this evidence was relevant to the lack of credibility of Chapman's story of harassment."

The allegations in the affidavit have not been proven in court.

Chapman referred questions Monday to his lawyer, Rocco Galati. Galati said he had not yet seen Whitmore's affidavit.

The contents of the affidavit are the latest in a string of tawdry sex accusations that have erupted since Chapman complained to the Canadian Judicial Council in 2010 about his dealings with the judge's husband seven years earlier.

In 2003, Douglas was a family law lawyer along with her husband, Jack King. King had uploaded sexually explicit photos of Douglas to a website dedicated to interracial sex and said his wife was looking for a black partner. He also emailed photos to Chapman, who is black, and who King had represented in a divorce. He asked Chapman to have sex with Douglas.

Chapman complained to King's law firm and King settled the matter within weeks by paying Chapman $25,000 to return all the photos and to never discuss the matter. Chapman broke that deal in 2010 and complained to the judicial council, saying Douglas was part of the sexual harassment.

The inquiry, which has been suspended amid court challenges and allegations of unfairness, is also examining whether Douglas failed to disclose the matter when she was appointed a judge in 2005 and whether the very existence of the photos disqualifies her from continuing as a judge.

Douglas, who rose to become associate chief justice of the Manitoba Court of Queen's Bench, has denied all the allegations. She and King have said he acted alone without her knowledge and was suffering from depression at the time.

The five-member panel overseeing the inquiry began hearings in the summer, but quickly ran into unfairness complaints from some of the lawyers involved. Chapman was the first witness to testify and Sheila Block, Douglas's principal lawyer, was prevented by the panel from cross-examining him about his sexual past.

That decision is one reason why Douglas's lawyers have accused the panel of bias. They have asked the Federal Court of Canada to halt the inquiry. There is no word on when the application will be heard.

Another wrench was thrown into the inquiry last month, when Guy Pratte, the independent lawyer leading the inquiry, suddenly resigned. Pratte was upset that the panel had another lawyer to cross-examine witnesses on its behalf. The panel cannot sit in judgment of the case while also participating and grilling witnesses, he said.

Galati said he will be fighting Douglas's lawyers attempts to halt the inquiry, in part because Chapman was not named as a respondent.

"I'm moving to quash the application on that basis and on the basis that the application, and the manner in which they're proceeding, is an abuse of process."