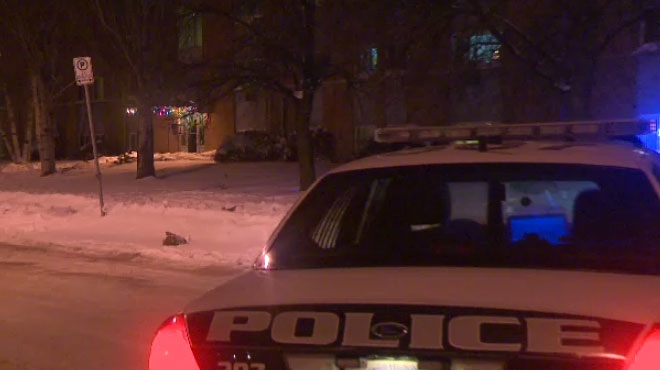 Police cars surround an apartment building on Partridge Avenue where a man was found shot inside a vehicle on Dec. 22. (File image)

Police have made an arrest in the case of a man found shot inside a vehicle outside a West Kildonan apartment last month.

Police originally responded to a call about a motor vehicle collision on Dec. 22. They found a 23-year-old man with a gunshot injury inside the car.

The investigation determined that two men went to Partridge Avenue for a drug deal. They met up with two other men in a vehicle, at which time a gun went off, hitting the driver, police said.

The suspects fled and the vehicle crashed into some parked cars. The passenger of the vehicle ran, leaving the injured man in the car, police said.

On Dec. 27, two men forced their way into a house in the 400 block of Boyd Avenue, robbed and assaulted a man and woman, and escaped with cash and drugs.

On Jan. 2, officers assisted by the canine unit and Air1 helicopter arrested one of the suspects in the area of Camille-Sys Street.

Tyler Kowal faces numerous charges in relation to both incidents, including two counts of attempted murder, assault with a weapon, breaking and entering, and multiple firearms charges.

Kowal is being held at the Remand Centre. The investigation continues.