Man charged with impaired driving after crash in Exchange District

WINNIPEG -- A Winnipeg man is facing impaired driving charges after an early-morning crash near Old Market Square on Thursday morning put one woman in hospital.

Winnipeg police said the collision happened around 4:30 a.m. at the corner of Bannatyne Avenue and Princess Street.

Police said a vehicle was seen driving erratically in the area, but as officers tried to pull the vehicle over it sped away and "almost immediately" crashed into another vehicle. Images from the scene show a traffic light standard lying across the sidewalk and debris on the road.

The driver then took off on foot, but was taken into custody after a short chase, police said.

The driver of the second vehicle, a woman, was taken to hospital in stable condition.

Justin Vandale, 29, is facing charges of impaired driving, dangerous operation of a motor vehicle, flight while pursued by a peace officer, and various weapons-related charges.

Traffic was closed for a number of hours westbound Bannatyne Avenue at King Street, and southbound Princess Street at William Avenue, but has since reopened.

Police said the investigation is continuing.

- With files from CTV's Alex Brown and Danton Unger. 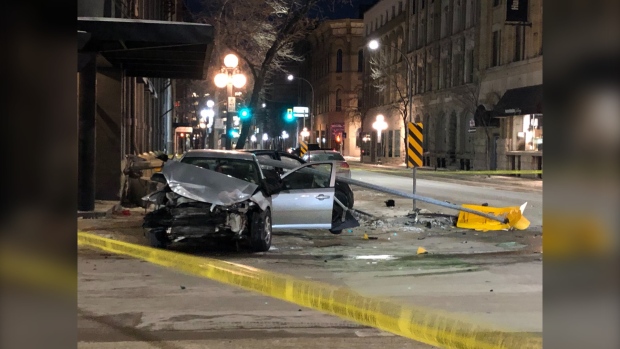