Man fined, given 1-year driving ban for collision that killed mother of 5 from La Salle 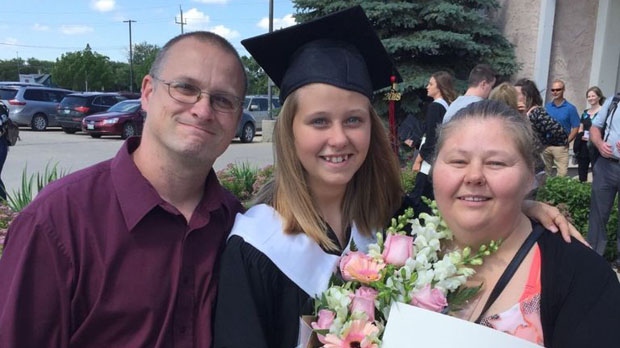 Tammy Rosko, pictured at right with family, died after a collision on the south Perimeter Highway. (Supplied photo.)

WINNIPEG -- A man has pleaded guilty to careless driving causing death in the Aug. 22, 2018, collision that killed a mother of five from La Salle, Man.

Tammy Rosko, 42, died when a westbound Chevrolet Silverado being driven by Evan Charbonneau crossed a raised centre divider on the south Perimeter Highway and collided head-on with Rosko’s eastbound minivan.

Charbonneau, now 35, was also seriously injured in the collision and received a $3,500 fine and a one-year driving ban.

“Ultimately this is a tragedy, a loss beyond words,” Crown attorney Colin Soul told the court Monday morning.

Members of Rosko’s family, including her husband and children, attended the court hearing. Tammy’s brother Mike Rosko was also there and wasn’t happy with the outcome.

“The family is extremely disappointed in the judicial system,” said Mike. “It just doesn’t seem right. Something has to change.”

At issue for the family is the Crown’s decision not to proceed with an impaired driving charge. Court was told Charbonneau has no memory of the incident and that neither speed, distracted driving, or impaired driving were factors in the collision.

However, court was told that Charbonneau made comments to first responders when he was being treated about previous cannabis consumption.

Soul told court that prompted a blood test that found traces of cannabis in his blood.

“It’s not a factor, however, that the Crown can point being a contributing factor to the accident,” Soul told the court.

Court heard no signs of impairment were noted by first responders before Charbonneau was transported to the Health Sciences Centre to be treated for his injuries.

Soul told Provincial Court Judge Lawrence Allen the Crown decided there was no case in relation to impairment.

Jeffrey Gindin, Charbonneau’s lawyer, told court his client has no recollection of the collision.

He added it is hard to know exactly why Charbonneau’s vehicle crossed the median but acknowledged a momentary lapse may have caused his client to lose control of the vehicle.

“It’s a very, very sad story all around,” said Gindin. “It’s going to haunt him for the rest of his life.”

Mike said the explanation his family heard in court leaves them with unanswered questions about Tammy’s death.

“We listened to all the letters that her children wrote, how much they miss her,” said Mike. “It’s tough. It’s really hard.”