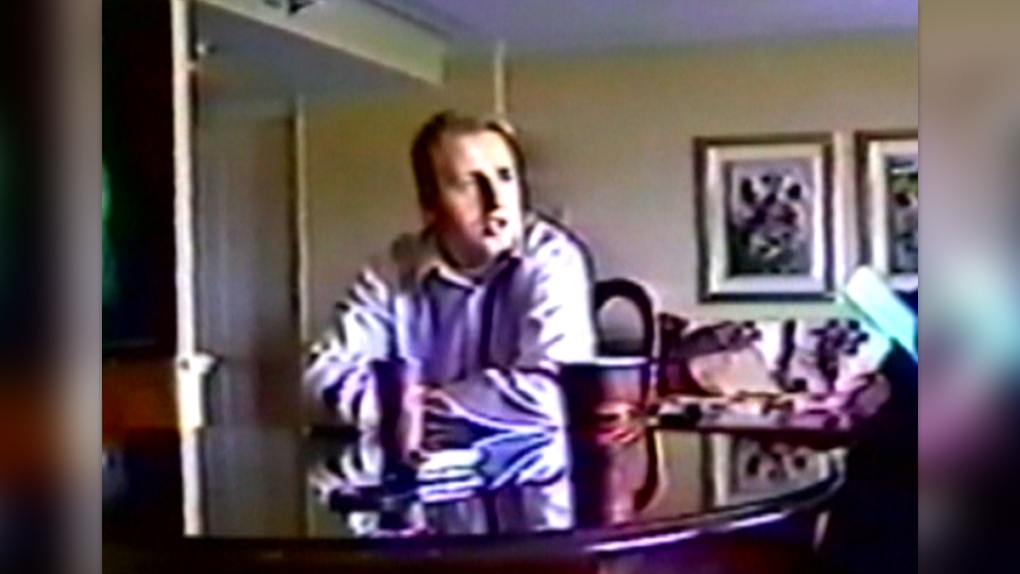 Image of Michael Bridges taken from CTV file footage of the tape of him making his confession.

WINNIPEG -- A man whose taped confession led police in Brandon, Man., to find the body of a missing 18-year-old buried in another person’s grave has taken steps to apply for early release.

Michael Bridges, 39, was convicted of first-degree murder in 2005, in connection with the death of his former girlfriend, Erin Chorney.

The conviction came with a sentence of 25 years before Bridges is eligible for parole, but a criminal code clause that was repealed in 2011 could lead to an to an earlier release.

Chorney’s body was found buried in another person’s grave in February 2004, nearly two years after she went missing in Brandon. Bridges led an undercover RCMP officer to the site during a sting operation, which also saw him admitting to the murder in a confession that was videotaped.

He had said that during an argument, he strangled Chorney -- at first with his hands, then a hair dryer -- before drowning her in a tub.

The police operation used is a controversial one. Called a Mr. Big sting, it involves officers pretending to be a part of a criminal organization and inviting a suspect to join, telling them they have to fess up about any past crimes before gaining entry. In 2014, the Supreme Court of Canada imposed stricter rules for using confessions obtained by the tactic in court.

In 2006 Bridges' lawyer had tried another approach to appeal his first-degree murder verdict, arguing unsuccessfully that the killing was not premeditated.

A faint hope of early parole

Earlier this month, a judge gave the go-ahead for Bridges to apply for his parole eligibility to be reconsidered under what is often called the “faint hope clause” in the criminal code.

It gives offenders with sentences of more than 15 years before parole eligibility the chance to ask their sentences be reduced, but only after 15 years of the sentence have already been served.

Because the clause was removed from the criminal code, only offenders who were convicted prior to Dec. 2, 2011 can apply under it.

In an endorsement of Bridges' application dated Oct. 3, Court of Queen’s Bench Justice John Menzies noted Bridges was 21 at the time of the crime, has support from friends and family and is not known to have ties to any gangs.

It also noted that Correctional Services Canada reports indicate he accepted responsibility for Chorney’s murder and shows signs of remorse.

The decision said Bridges has been housed in minimum security since 2014 and has not been found guilty of any disciplinary conduct while behind bars, and he has also completed training while incarcerated.

Justice Menzies also noted “the dramatic effects of this crime cannot be overstated,” saying he was provided with victim impact statements from the Chorney family, but there was a good likelihood Bridge’s sentence could be reduced under the faint hope clause.