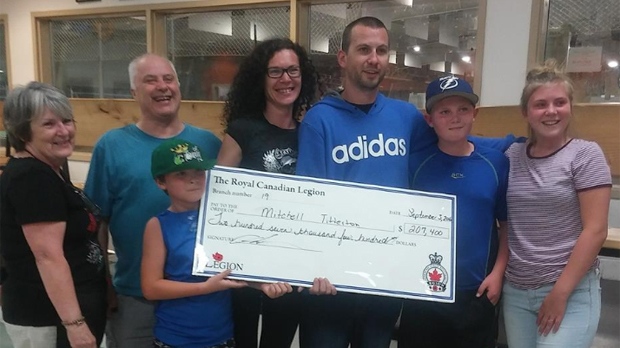 One man is more than $200,000 richer after the Chase the Ace event in The Pas Saturday night.

For the last 44 weeks, the Royal Canadian Legion in The Pas has been holding a Chase the Ace event.

So far, no one has managed to catch the ace and win the jackpot.

As the pot grew, so has the crowd. People began lining up outside the town's arena at 8 a.m. on Saturday.

Linda Kuhl of the legion said hundreds of people had lined up by noon.

“I think it’s great. It’s been great for the town. The people have been awesome. Our attendance has been great. Anyone attending has had a great time.”

Organizers are expecting around 1,000 people by Saturday night. The large crowds forced the event to move into the Kelsey Recreation Centre. Organizers say they can’t keep using the venue after Saturday night, so even though there are 10 cards left, they will draw until someone lands the jackpot.

News of hundreds of layoffs and the shutting down of the mill owned by Tolko Industries recently shook the town. Kuhl said the lottery has been good for morale in the town.

“It’s been a great morale booster, but this is a great town. People are optimistic. We don’t have a defeated attitude yet. People are coming out, having a great time. Somebody who really needs the money, who’s been laid off, hopefully they win it. The town’s attitude right now is good.”