WINNIPEG -- As multiple wildfires burn out of control in Manitoba, the province is adding more fire and travel restrictions and banning campfires effective immediately.

As of Thursday evening, six wildfires were burning out of control in Manitoba including one along Falcon Lake.

The province said the risk of fires is high to extreme across the province.

"There are drought conditions across much of southern Manitoba, which can allow wildfires to spread out of control quickly and challenge the ability to fight multiple fires at the same time," the province said in a fire bulletin released Thursday.

"Human-caused fires are preventable and put people and communities unnecessarily at risk."

The province is putting level two restrictions across much of the province, which bans motorized backcountry travel unless with a travel permit, prohibits campfires, restricts camping to developed campgrounds, and restricts landing and launching to developed shorelines only.

Along with this, the province is closing all backcountry trails and water routes to the public in all provincial parks south of the 53rd parallel until further notice. The province said some trails in developed front-country campgrounds and townsites are open for pedestrians.

The province said the restrictions are also in place in the following areas:

PR 302 at the U.S. border north to PTH 12 and along the eastern shore of Lake Winnipeg to Poplar River and all the way east to the Ontario border. This also includes the Mars Hills Wildlife Management Area.

More information about the fire and travel restrictions can be found online. 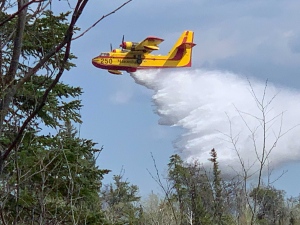 Wildfire burns out of control in south Whiteshell